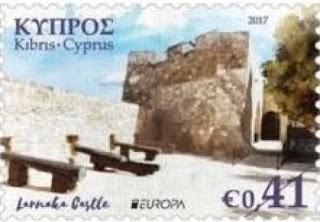 🇨🇾 Cyprus Post issued 2 stamps depicting local castles on 4 May 2017 as its contribution to the 2017 Europa omnibus. The stamps were designed by Ioanna Kalli and Paschalis Eliopoulis and lithographed by Veridos Matsoukis SA, Greece. The issue is accompanied by a booklet. The depicted castles are:- Larnaka Castle and Pafos Castle. Rating:- ****. 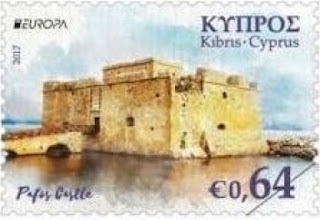 🇹🇷 Meanwhile, the postal service of the Turkish Republic Of Northern Cyprus will also issue a pair of Europa stamps on 11 May 2017. The issue was designed by GK Sonmezer. Rating:- **** 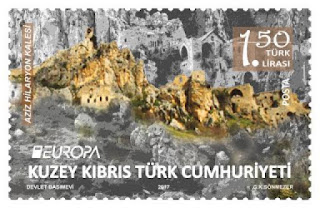 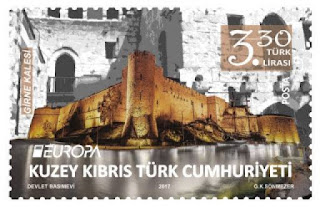 🇲🇹 Along with the pair of Europa stamps mentioned in Blog 993 which were issued by Malta Post on 9 May 2017 a booklet containing the lower valued stamp was also released. The booklet contains 5 x 59c stamps. Rating:- ***.
Maltapost will also issue a 37c "Map of Malta" Greetings stamp with attached label on 11 May 2017 to commemorate the Maltese philatelic bureau's participation in the philatelic exhibition to be held in Essen from 11 - 13 May 2017. These stamps with attached labels are an excellent way to mark a post office's attendance at a philatelic exhibition and so much cheaper than the issue of numerous "Collectors strips" of Post and Go labels. Rating:- ***. 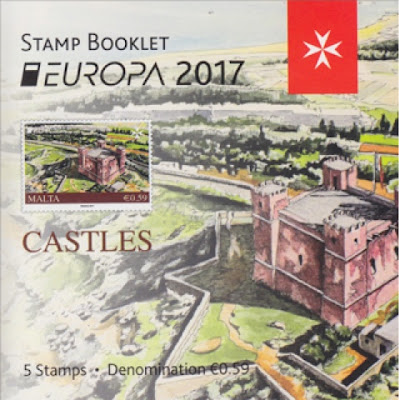 🇬🇬  Another booklet to take note of is a "Prestige Booklet" put out by Guernsey Post with the name of Alderney printed on the stamps and on the subject of "Alderney scenes". The price of the item is £16.24p. Rating:- *. 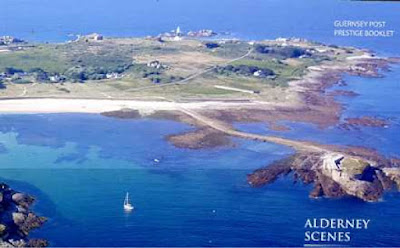 The Guernsey Philatelic Bureau tweeted on 8 May 2017 that Post and Go kiosk GG01 sited in its Smith Street post office had dispensed strips of its Lighthouses stamps on that day to welcome the cruise ship Celebrity Eclipse into port. The labels had a Welcome inscription added to it. See also Blog 950, 954, 955 and 994.

🇭🇰 Hong Kong Post will issue a set of 6 stamps and 1 miniature sheet on 16 May 2017 on the subject of "Outdoor fun". The set was designed by Simon Chung and lithographed by Enschede and perforated 13.5. This is a somewhat inconsequential issue. Rating:- ***. 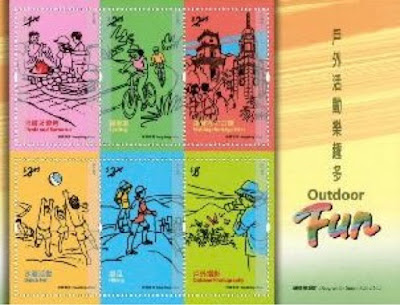 🇨🇦 Canada Post has released the 4th design of its Canada 150 issue to be released on 1 June 2017. The stamp recalls the passing of the law on 20 July 2005 which allowed non-heterosexual people to marry. The designer has resorted to the cliche of depicting a rainbow-coloured flag to illustrate the subject. Rating:- *. 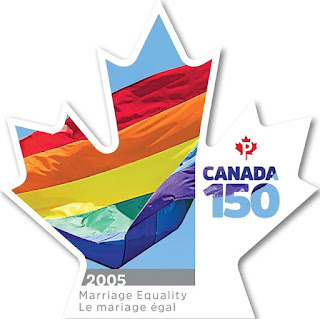