1001. Philatelic Collector Inc. Hits Back - Samoa Surcharges "Produced For Nothing More Than Profit". 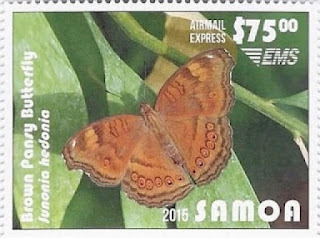 🇼🇸 In Blog 991, the issue of a set of extremely high face-valued surcharges from Samoa Post was detailed along with the news that Samoa Post had discontinued its contract with the USA-based philatelic agency, Philatelic Collector Inc. Chris Lazar of PCI has now posted a response to this report in the Comment section of 991 (qv).

To summarise his interesting and detailed comments posted in 991:-

Chris Lazar opens by asserting that the new high value surcharges were produced by Samoa Post "... for nothing other than profit!".

He goes on to write that Philatelic Collector Inc. "were asked to balance their [Samoa Post's] philatelic budget as they were losing thousands of dollars per issue they produced. We offered them a generous royalty on all philatelic sales, we covered all costs for all new issues, we welcomed all new issue suggestions from Samoa Post and the real kicker here is that we provided Samoa Post with any postal value they required for postal needs for free. This was spelled out in our Philatelic Supply Agreement with them along with other aspects".

Mr Lazar writes that all was going well until 2016 with the agency "growing the philatelic profile for Samoa in various markets as they asked [notably the market in China, I presume - WK]" but then "...Out of nowhere Samoa Post breaches our supply agreement with them and illegally produces overprinted stamps and says it was because we refused to supply postage to the post office which is incorrect." Mr Lazar goes on to allege that "a substantial sale of assorted items along with these overprints  were sold to Steven [Zirinsky]. To be clear there was absolutely no reason Samoa Post needed these overprints as all they need to do was notify us of postage needs and the denominations would have been sent right out".

Mr Lazar reports that Philatelic Collector Inc. had "endless correspondence with the CEO of Samoa Post about this [alleged] breach of agreement and he alleges that the agency was told by Samoa Post that, "The Board [of Samoa Post] is only interested in $$$$$$, not words, not quality, not anything, not me or you !!!!!!!!!" Mr Lazar goes on to write that, "At this point it became very evident that Samoa Post does not care about the perception of its philatelic profile, which was further supported by Samoa Post expressing interest in representation by another agent which is often bashed on this Blog [IGPC presumably but possibly even Stamperija - WK]."

Mr Lazar's comment casts doubts on the previous assertion that the latest need for extremely high face valued "Package" stamps in Samoa was caused by a metering machine breaking down and not being repaired and he alleges that the CEO "was threatening to release more overprints back over the summer of 2016 during our contract period (showing these were planned for quite a while [and not necessitated by the misfunctioning meter machine - WK])".

Mr. Lazar states that PCI's contract with Samoa Post "has still not been closed out" as the agency is still trying to resolve "past problems".

Mr Lazar states that, "You can paint agents as the bad guys all you want but please know that our company ( Philatelic Collector) works very closely with countries we represent and try to do what we can to generate growing funds for the post office while giving them the postage stamps they need for use".

See Blog 991 "Comments" for my response and the full text of Chris Lazar's comment.
Posted by White Knight at 03:44