855. Shakespeare's A009 Post And Go Stamps; The Monarch Of Bermuda.

1 November 2016 -  Post and Go IAR kiosk A009 has been installed in the gift shop of Shakespeare's Birthplace Centre in Henley Street in Stratford upon Avon and is dispensing merrily its supplies of "Union Jack" and "Machin Head" labels. When I arrived there at about midday it had already dispensed, so I was told, 2 reels of Machin Head labels, the first with code MA15 and the second with no code, and was being reloaded with another MA15 coded-reel.
It was a quiet, rather dull, day in Stratford with a couple of groups of Chinese tourists happily photographing Shakespeare's parents' house in Henley Street but the gift shop was unusually quiet with no sign of any tourists taking the opportunity to use the kiosk to obtain stamps for any mail they might be sending home. This first day was clearly a day for the stamp dealers and collectors (more of the former than the latter I suspect).
The logo is rather slick - "Shakespeare birthplace trust" in stylised format but how much more exciting these stamps could be if Royal Mail would individualise their designs with illustrations relevant to the site at which the stamps are being dispensed. 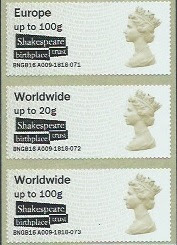 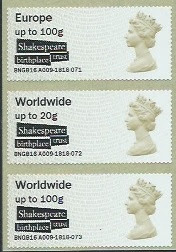 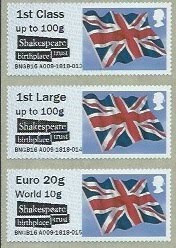 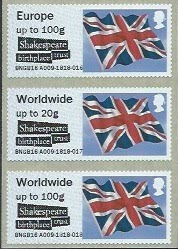 I was interested to hear that these stamps were considered unusual because the Birthplace Trust had approached Royal Mail about having a kiosk installed at the site after someone senior from the trust had visited another site at which Post and Go labels were being sold and seen the potential appeal to tourists whereas, usually, Royal Mail approaches museums and tourist sites to see if they are interested in having a kiosk situated at their location.
I walked the short distance from the Birthplace gift shop to Henley Street post office - a splendid example of glum 1960's British post office architecture completely out of keeping with the area in which it is located - and prepared myself a couple of covers of both the Union Jack and Machin Head stamps and sent them to myself by recorded delivery obtaining some neat counter-applied post marks for "Stratford upon Avon".
So, in summary, "Post and Go" enthusiasts have 2 varieties of the Machin Head stamp to add to their collection - no date code and MA15 - as well as the Union Jack stamp and if you like to collect them in "Collectors strips" then a total of 18 new stamps at a cost of £7.75 per strip (a total of £23.25p) will need to be obtained.

Shakespeare wrote, "Didst not I post and go this day,
When me thinks I saw the fair kiosk
In my little house
Glistening in the sweet light of the after-noon
And sprites and faeries all a gathered round
To see thy dear countenance when my
Letter, heated with the passion of love,
Was placed in thine own dear and pretty hands....."

(From Much Ado About Postage, his little known and now long-lost 39th play.) 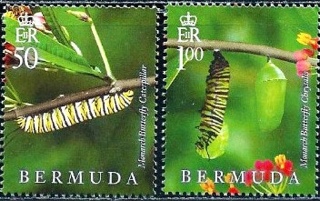 On the subject of Shakespeare, the Bermuda Post Office missed a trick when it was decided not to issue a set of stamps to commemorate the 400th anniversary of Shakespeare's death particularly as the wreck of the Sea Venture off the island is generally thought to be the inspiration for his play, The Tempest.

Likewise the territory's postal authorities chose not to release an issue to commemorate the 90th birthday of Queen Elizabeth II but instead have decided to feature another type of monarch on its latest stamp issue - an attractive set of 4 stamps and 1 miniature sheet on 20 October 2016 on the subject of the Lifecycle of the monarch butterfly. Rating:- *****. 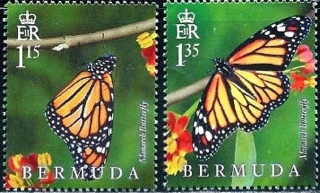