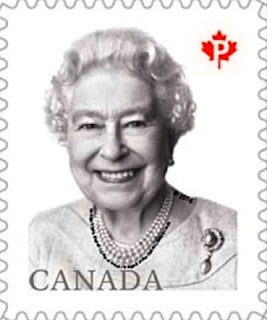 Canada Post will release new definitive stamps in the "Permanent" ('P') rate on 11 January 2016. The first is a marvellous new portrait of Queen Elizabeth II sold as a booklet of 10 self-adhesive stamps. The issue was lithographed by Lowe-Martin and the printer's imprint at the top right of the booklet is an amusing depiction of 4 corgi dogs. Rating:- *****. 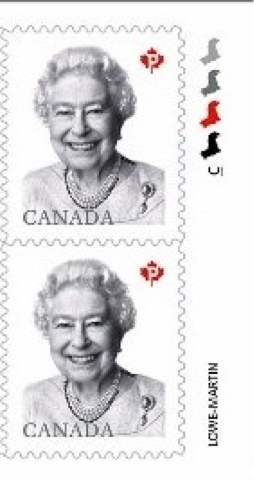 On the same date, 5 new UNESCO World Heritage site stamps will also be issued by Canada Post. The stamps are produced in self-adhesive format in booklets of 10 stamps (2 x 5 different stamps) and as a gummed miniature sheet containing all 5 stamps. The stamps were designed by Lime Design Inc. Rating:- *****. 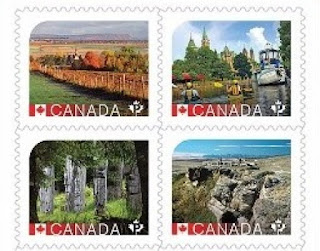 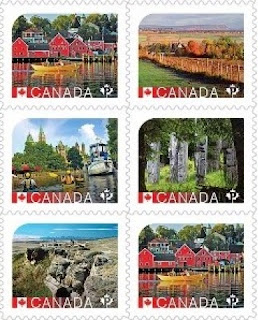 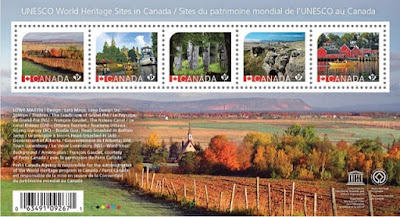 The IAR kiosk, GG01 will be used at the Spring Stampex 2016 philatelic exhibition (in London where, of course, the dispensed labels will have no postal validity), from 17 to 20 February 2016.
The kiosk will dispense labels with new designs which depict animals of Guernsey - the extinct Guernsey golden donkey, the Guernsey golden goat, the Guernsey cow, the Atlantic grey seal, the puffin and the blond hedgehog, all in a "Collectors strip".
The kiosk will also dispense a "Collectors strip" of the Guernsey Flag labels in 6 values all with the additional inscription "500 Years of Postal History" to mark the fact that Royal Mail has chosen to claim that 2016 is its 500th anniversary year (see Blog 689).
Back in Guernsey itself, Kiosk GG02 will dispense the Guernsey animals stamps in a "collectors strip" but with the additional inscription "Envoy House". After Stampex the Guernsey Philatelic Bureau will sell (not dispensed from a kiosk directly to the purchaser) labels produced by the B series kiosks in 2 strips  - the 6 Guernsey animals labels and the 6 Guernsey Flag labels with the added inscription "500 Years of Postal History". Keen "Post And Go" collectors will therefore have a total of 5 new strips to buy - that is - 30 new "Post and Go" labels/stamps (only 6 of which are to be dispensed directly to the customer from a kiosk situated in Guernsey itself).
Meanwhile, Royal Mail's first contribution to "Post And Go" products of 2016 will result in issues for Spring Stampex which take the form of a "Collectors strip" of Machin Head labels with the added inscription "500 Years of Royal Mail" which will be sold from the IAR kiosk at the exhibition for the 4 days of Stampex only and from no other source and so I view this item as nothing more significant than an exhibition souvenir.
There will also be an IAR kiosk-dispensed Collectors strip of 6 values of the Royal Mail Heritage Transport stamps (see Blog 689) and an additional IAR kiosk-dispensed Collectors strip of 6 Locomotive Royal Mail Heritage stamps. Dealers will be able to pre-order the above items presumably printed by a 'B' series machine. At this stage the announcement of these items seems to suggest that collectors will only be able to buy the Heritage Transport stamps (presumably entirely printed in photogravure and sold in the usual pack) from the Philatelic Bureau and not the Machin Head 500 Years and the Heritage Locomotive strip.
Singapore Post will issue a new Mystamp sheetlet on 8 January 2016 to commemorate the Year of the Monkey. It consists of 6 stamps (3 each of 2 different designs ) attached to 6 labels (again 3 of 2 different designs). The same 2 stamps will also be sold in a sheetlet sold in a folder. The sheetlet consists of 14 stamps (7 of each stamp) plus 11 stamp-sized labels each depicting a different creature of the lunar zodiac. The folder also contains a second sheetlet which is made up of 4 stamps (2 of each design) plus a central "money bag" design which symbolises "to attract wealth and treasure". 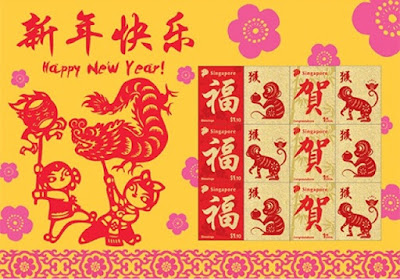 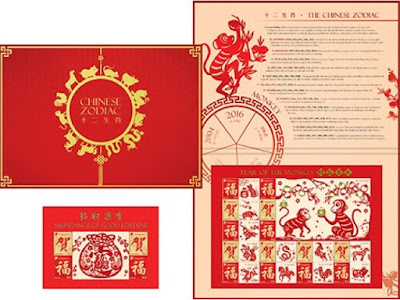 Singapore Post will issue 3 basic stamps on 7 January 2015 to commemorate the Lunar new year. The issue was designed by Leo Teck Ching and lithographed by Southern Colour Print. A "Collectors sheet" will also be issued containing 1 x $5 and 1 x $10 stamps which was lithographed with photochromic and iridescent ink by Cartor. Finally, the 1st local value will also be sold in self-adhesive format in a sheetlet of 10 stamps. Rating :- *****. 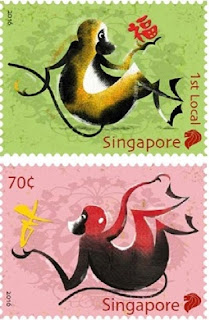 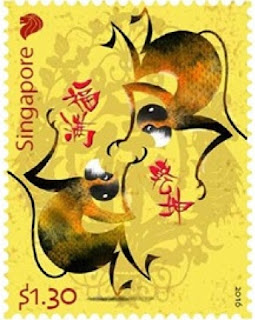 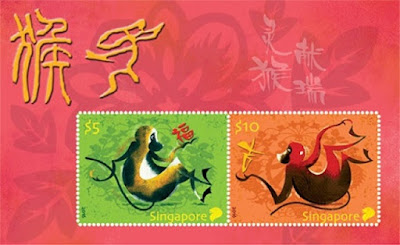 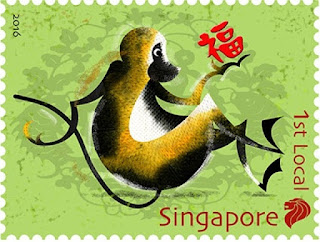