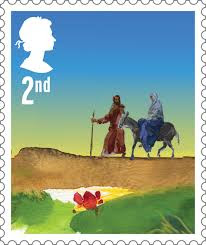 On 1 January 2015 I published Blog 500, "Stamps ... The End" which it is useful to read before turning one's attention to this piece. In it I sought to examine, based on my own personal mail, just how much stamps are actually used on ordinary mail in these present times. I have now repeated the exercise to see if the situation has changed in the past year.
I used the same method as outlined in Blog 500 and examined each piece of personal mail I received over a 6 month period from June to December 2015.

I received a total of 329 items of mail during the study period compared with 491 items received during the same study period in 2014. This is a startling reduction of 162 (33%) items of mail from 2014 to 2015. I can not identify any personal circumstances which have changed in that 12 month period which would account for my receiving considerably less mail than one year previously. This finding is consistent with observations by others that far less mail is being carried in the world's postal systems than before.

Thus in this small study I have observed:-
1. A notable reduction in mail received through the post compared with 12 months ago. As stated above, I am not aware of any change in personal circumstances which would explain this observation.

2. There was no real change in the ratios of domestic to foreign mail received in 2015 compared with 2014.

4. 13.1% of received domestic mail had postage stamps attached to it in 2015 compared with only 2.7% in 2014 but only 1 item was cancelled with a contemporary commemorative stamp and that was a 2nd class Christmas stamp. 60% of stamps used on domestic mail were old commemoratives and were generally attached to mail from philatelic sources.

5. 45.9% of mail received from foreign philatelic sources was cancelled with postage stamps compared with 67.5% in 2014.

The 2 main points I have learned from this year's study are that the amount of mail received through the post appears to have reduced significantly in the past 12 months and that while postage stamps continue to be used on mail, particularly old commemoratives on mail from philatelic sources, the usage of contemporary commemoratives, either by non-philatelic or philatelic mail senders, is minimal to virtually non-existent and when such stamps are used they are mainly 2nd class Christmas stamps used on greeting cards.

This finding that modern commemoratives are virtually unused on ordinary mail is in agreement with similar findings in 2014 and raises the question as to whether there is any postal need whatsoever for such items. They are simply produced for sale to stamp collectors who buy them because they have been released on to a market which is aimed entirely at them (apart from issues such as the Royal Mail Star Wars set which is more likely to appeal to enthusiasts of the film series than to stamp collectors). If stamp collectors did not continue to buy the ongoing flood of new issues then postal authorities would have no reason to issue them and a vicious circle would be broken.

Meanwhile, one of the most bizarre issues of 2015:- 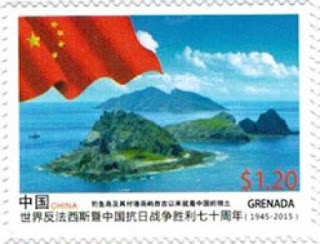 The USA-based philatelic agency, IGPC, has released a set of 4 stamps in the name of the Grenada postal administration on the subject of the 70th anniversary of the anti-fascist victory by The People's Republic Of China. The stamps are extraordinary because they inscribed almost entirely in Chinese and it is doubtful that an ordinary Grenadan who bought one of these stamps would have a clue about what the stamps commemorated. It's hard to believe that these items are freely on sale across the counters of ordinary Grenadan post offices. I have not seen a "date of issue" for this set up to now. Rating:- 0, 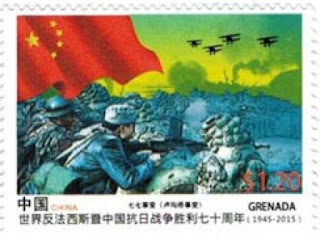 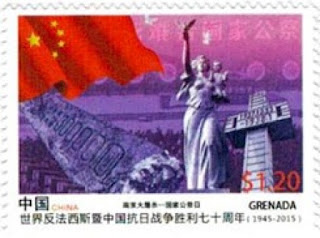 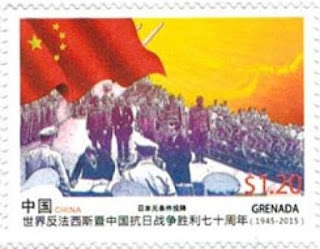