Royal Mail will issue a set of 6 stamps and a miniature sheet containing 4 different stamps on 17 February 2016 to commemorate the Quincentenary of postal services in England which are judged to have begun in 1516.
According to Wikipedia, The King's Book Of Payments of 1512 records that a payment of £100 was made to Brian Tuke as master of the posts. In February 1517 he was officially appointed to the title of Governor of the King's Posts in 1517 having been made a Knight of the King's Body the previous year. In 1522 he was promoted to be French Secretary To the King and on 17 April 1523 Tuke was appointed to be the Clerk of Parliament. In 1528 he was made one of the 4 Commissioners to treat with France and later was made Treasurer of the Royal Household. In 1533 Tuke became High Sheriff of Essex and Hertfordshire. He died on 26 October 1545. 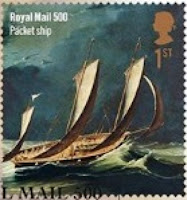 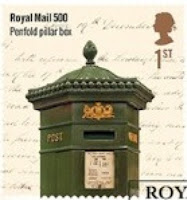 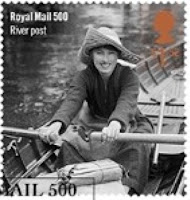 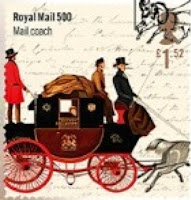 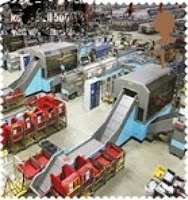 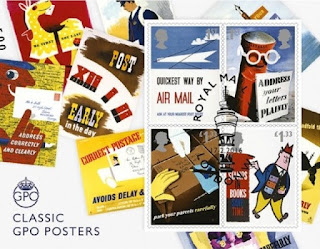 Six new "Post and Go" stamps will be released on 17 February 2015 which are also on the subject of the Quincentenary of Royal Mail. They depict modes of transporting the post through the ages and make an interesting and attractive issue. I presume that they will be available in 3 formats - from IAR kiosks sited at the Spring Stampex 2016 philatelic exhibition in London and at the 4 delivery offices in various parts of the country, from NCR kiosks sited at various post offices around Britain and from presentation packs sold by the Philatelic Bureau - that's actually 18 new stamps.

A further issue follows on 28 February 2016 which takes the form of a booklet of 6 stamps which commemorate the 150th anniversary of the Penny Red along with another Prestige booklet.

Back to Shakespeare. One of the designs of the proposed set of stamps to be issued on 5 April 2016 which will commemorate the quatercentenary of the death of William Shakespeare has been revealed by Royal Mail. I am disheartened by the design which is about as dull and uninteresting as any British stamp design which has gone before. If the published example is anything to go by, the design is nothing more than a piece of calligraphy which quotes a line from Shakespeare's work. There appears to be no pictorial element to the design at all.
What a missed opportunity to produce an exciting set of designs featuring some of Shakespeare's immortal characters illustrated by original art or perhaps by photographs depicting great Shakespearean actors in some of those roles (yes I know both of those approaches have been used before but they were highly successful and memorable especially when compared with the upcoming stamps which look like they deserve 2 out of 10 for effort). Perhaps Royal Mail could have used the artist who designed the Star Wars stamps to provide a similar issue but substituting Star Wars characters with Shakespeare's dramatis personae. 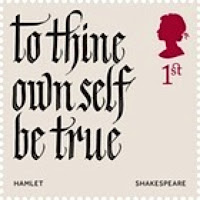 A stamp from the third issue to commemorate the centenary of the First World War to be issued on 21 June 2016 has also been unveiled. This shows an interesting piece of art, "Battlefield Poppy" by the photographer, Giles Revell. My only complaint here is that it is yet another "Poppy" stamp, of which there seems to have been a great number in recent years, and it would be pleasing if we could now have some original subjects featured on the stamps in this continuing series. 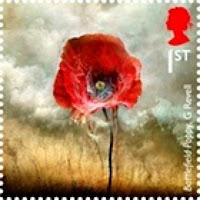 Finally, Royal Mil will issue one of those irritating "Commemorative sheets" (total face value of stamps £6.30p but sold for £14.95) on 12 January 2016 to commemorate the 60th anniversary of the Duke Of Edinburgh's Award scheme. It would have been nice to have a couple of stamps actually commemorating this remarkable man's 95th birthday but perhaps Buckingham Palace did not wish Royal Mail to put out such an issue feeling that the set to commemorate The Queen's 90th birthday was quite enough. 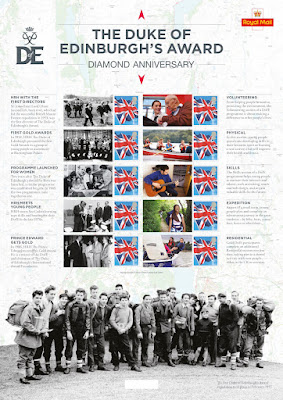