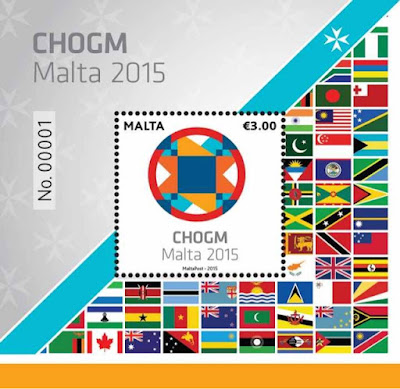 From 27 to 29 November 2015, Malta will play host to the Commonwealth Heads Of Government Meeting, usually called CHOGM. MaltaPost plans to issue a single miniature sheet on 27 November 2015 to commemorate the important event, the second time the island has played host to this meeting having done so previously in 2005.
No doubt The Maltese government will also be preparing to apologise to the President of Malawi on behalf of MaltaPost for the serious diplomatic offence that will be caused by the depiction of the Malawi flag on the miniature sheet - the flag included in the design is the short-lived flag used between 2010 and 2012 when it was abandoned by the then Malawian President, Mrs. Joyce Banda (see Blog of 2 June 2012).
Stamp designers are often tempted into incorporating flags into their designs and time and time again they perpetrate errors which are likely to cause offence to other countries. Suggestion to stamp designers and postal administrations:- consult a vexillologist before passing a stamp fit to issue.
By the way, the sheet depicts the flags of Nigeria, South Africa, Mauritius, Zambia, Bangladesh, Tonga, India, Malaysia, Solomon Islands, Pakistan, Singapore, Bahamas, Antigua And Barbuda, Belize, Tanzania, Dominica, Grenada, Guyana, Jamaica, St. Kitts-Nevis, Nauru, Sri Lanka, Trinidad And Tobago, Samoa, Cyprus, United Kingdom, Uganda, Sierra Leone, Kenya, Botswana, Fiji, Kiribati, Saint Lucia, Malta, Seychelles, Maldives, Lesotho, Ghana, Cameroon, New Zealand, Maldives (again), Brunei Darussalam, Tuvalu, Vanuatu, Zambia (again), Canada, Australia, Papua New Guinea, Rwanda, Malawi (2010 - 2012), Swaziland, Mozambique and Namibia. The designer, Sean Cini, seems to have forgotten to include St. Vincent And The Grenadines and Barbados. What a mess! 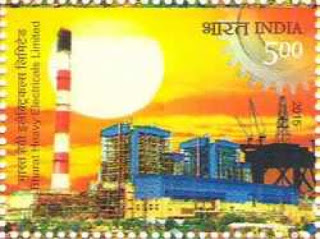 The postal service of Brunei Darussalam has released 2 new issues. The first issue commemorates the Golden Jubilee of the Royal Brunei Navy and is made up of 3 stamps released in a se-tenant strip. The designs feature prominently the Sultan of Brunei. Rating:- ***. 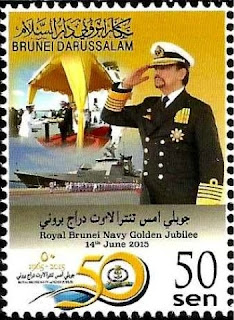 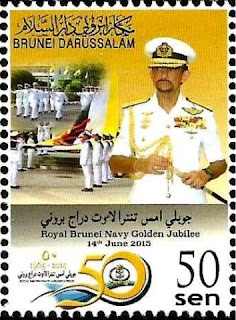 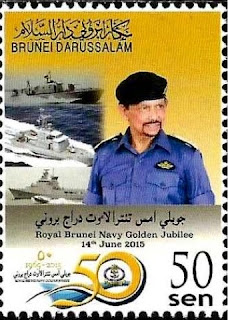 The second set is made up of 3 stamps and 1 miniature sheet and commemorates the 70th anniversary of the United Nations. I do not yet know the date of issue of either of these sets. Rating:- *. 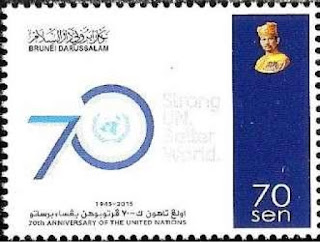 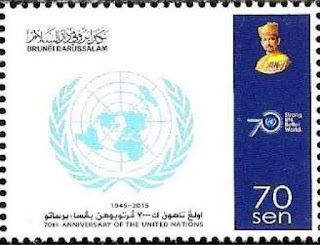 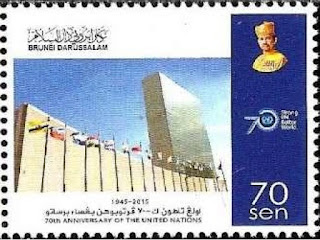 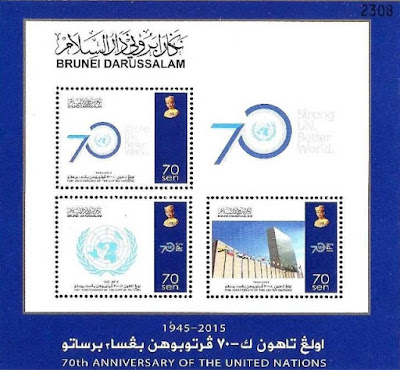 The Post And Go labels produced by Royal Mail in kiosks situated at the 31st Asian International Stamp Show held in Hong Kong from 20 to 23 November 2015 are now also being sold from the Royal Mail Philatelic Bureau. The labels come in 2 forms - Collectors' strips of 6 labels with the Union Jack design and with the View of Hong Kong design both with the added inscription "Hong Kong November 2015". The price from the Bureau is £7.68p per strip or £15.76p for both sets.
These are actually quite interesting and important sets because, according to the Bureau, "This stamp was produced using a four colour digital press instead of the original gravure printing. Royal Mail is trialling this production method to assess its viability from a quality viewpoint and the potential of shorter production runs of specific designs".
Hence these Collectors' strips represent a new development in the printing of "British" stamps and as such I feel I should add them to my collection especially as they are freely available to the stamp buying public (even if only from the Philatelic Bureau) and they are being sold in the country where they are postally valid (unlike those dispensed from the kiosk in Hong Kong where they clearly are not postally valid and were sold only for a limited time period to a restricted number of customers i.e. those actually attending the exhibition although, of course, these items provided them with pleasing souvenirs of their visit to the exhibition. Rating:- *****. 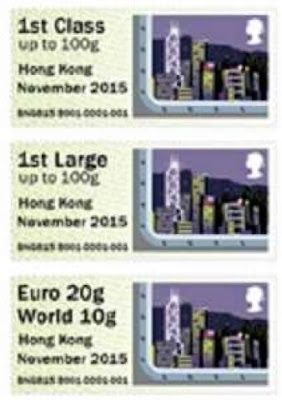 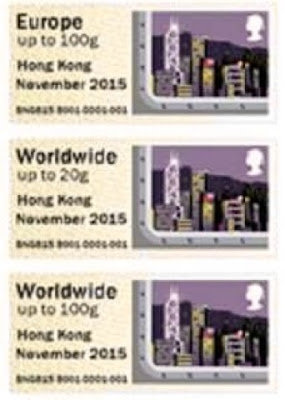 Montserrat Philatelic Bureau Ltd. has issued 1 sheetlet of 4 different stamps and 1 accompanying single stamp miniature sheet on the subject of "Beetles". This follows a recent issue on "Bees" so it looks as though there's an avid entomologist involved in choosing subjects for Montserrat's new issue programme. Whether or not the featured beetles are actually found in Montserrat I can not say and presently I do not know the date of issue. Rating:- **. 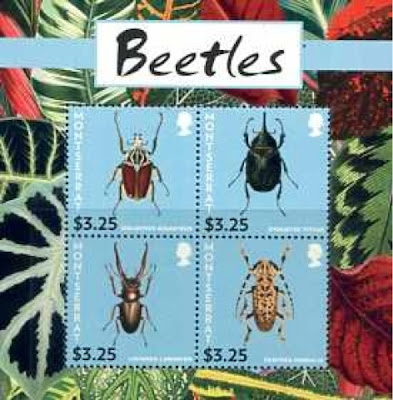 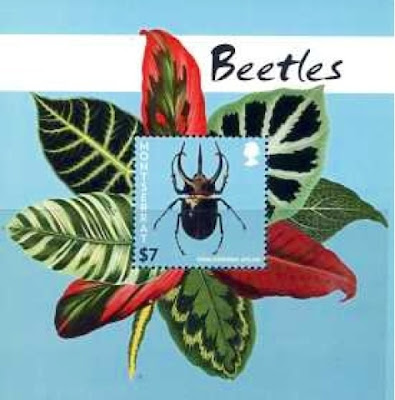