In a Christmas newsletter, the Jersey Post Group has announced that "We've had lots of great feedback about our stamp programme this year and have been listening to your comments and suggestions, reducing the overall number of stamps in 2016 whilst continuing to offer a range of products and additional Sheets and Post And Go".

So during 2016, the postal administration of this small island is planning to only release.....14 new stamp issues plus 2 basic designs of "Post And Go" stamps. Fourteen sets .... yes, they've been listening, sort of.
So the vital subjects which will be featured on Jersey Post's issues next year are:-
5 January  - "Year of The Monkey",
6 February - RAF Search and Rescue,
9 March - "The Royal Legacy of Queen Victoria - King George V",
29 April - Fifth Wedding anniversary of The Duke And Duchess of Cambridge,
3 May - Europa - "Think Green",
11 May - Einstein's Theory of General Relativity,
7 June - Jersey Old Motor Club,
5 July - Popular culture of the 1950's,
4 August - Centenary of The First World War - Battles,
22 September - Links with China (again!) - Waterfowl,
6 October - Jersey myths and legends,
4 November - Seasons - Winter,
25 November - Christmas - "Father Christmas in Jersey",
February - Post And Go - "Jersey Definitives - The Crest of Jersey",
September - Post And Go" - "Beetles".

From the point of view of my own collection, because of Jersey Post's excessive issuing of stamps in recent years, I decided that I would collect only new issues which commemorated important locally relevant anniversaries and events and I have to say that hardly any of the above seem to fit in with those criteria. It does not look as though Jersey Post will be relieving me of much money next year.

Furthermore the assertion that Jersey Post is "reducing the overall number of stamps in 2016" barely applies to the number of issues since there seems to have been 15 sets in 2015 - only one more than is planned for 2016 and the extra set in 2015 is actually a set of definitives so the number of "special" issues will not be reduced at all and the absence of the 15th set will be compensated by producing 2 " Post and Go" sets instead of the single new design set of 2015.

There is to be the first Jersey Stamps Exhibition at the Jersey Museum's Link Gallery from 5 to 31 December 2015 with the stamp engraver, Martin Morck, being present there on 7 and 8 December.

In Blog 498 I depicted 2 Horizon labels from Isle Of Man which dated back to 2005 and at the time I remembered receiving a differemt type of label a few years earlier than those. Unfortunately I had misplaced the item but I have just discovered its hiding place and now depict it below. The label is timed 15.43 19 DEC 01. When I wrote the previous Blog on the subject I remember finding an article on the internet which mentioned the period of use of this design but I can not find the information now. Still at least I have the stamp now in my Isle Of Man collection.

In Blog 642 I wrote about "how to make your customers happy". Isle of Man Stamps And Coins have made me a happy punter by sending me one of their Christmas cards which I illustrate below. I have received a number of such items over the years and they make an interesting little collection in their own right. And for once a year they don't cost the customer anything. Much appreciated - Merry Christmas to Isle Of Man Stamps And Coins staff in return! 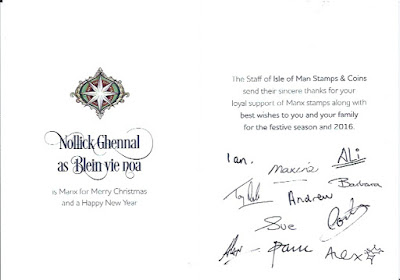 I have received recently the RM12 pack from Pos Malaysia which was issued on 7 May 2015 (see also Blog 569) to commemorate the Installation of The Sultan of Perak. The pack contains 2 miniature sheets, both of which contain partially imperforate stamps, with the yellow used on one of the sheets replaced by gold on the other. Rating:- ***. 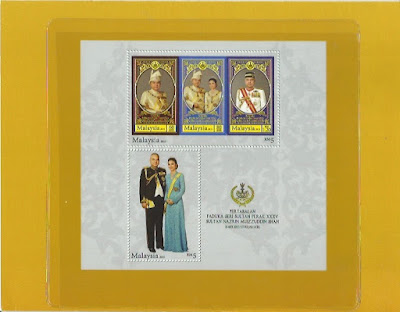 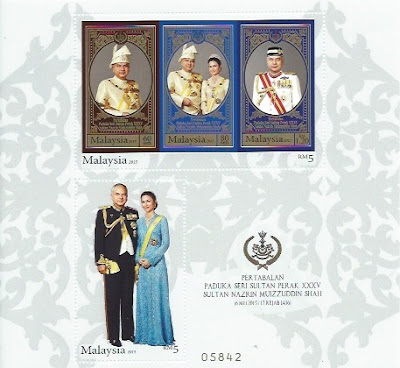