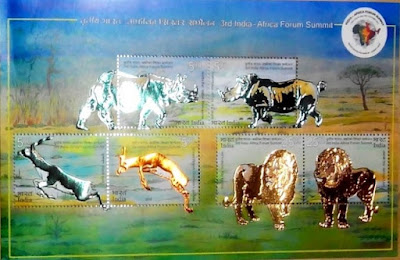 Having attempted to predict the 2016 Royal Mail new issue programme back in Blog 594, the real programme has now been revealed in the latest Norvic Philatelics Blog and shows that my crystal ball was rather cloudy at the time of my predictions but not entirely faulty!

The real programme begins with an issue on 7 January which commemorates the Centenary of the Endurance Expedition led by Ernest Shackleton.
Then - 17 February - 500th anniversary of the Royal Mail;
15 March - British Humanitarians (including Sir Nicholas Winton);
5 April - Quatercentenary of the death of William Shakespeare;
21April - 90th Birthday of Queen Elizabeth II;
17 May - "Animail"
21 June - Centenary of the First World War;
7 July - Music icons;
28 July - 150th Birth anniversary of Beatrix Potter;
16 August - Landscape Gardens;
2 September - 350th anniversary of the Great Fire of London;
15 September - 40th anniversary of the death of Agatha Christie;
20 October - "To be announced";
8 November - Christmas.
Almost everything in this programme has featured on British stamps before (yawn, yawn) - in the past we've had Shakespeare (but this is a very notable anniversary), royal birthdays, First World War, music icons (album sleeves including Pink Floyd which, I speculate, may be featured again), Beatrix Potter, Agatha Christie, gardens and Christmas. As usual, London is singled out for a commemoration (Great Fire issue) - does Royal Mail believe that nothing worth noting has ever happened in the rest of The United Kingdom?
As usual too, the whole panoply of pre-Tudor British history is ignored by Royal Mail - even the 950th anniversary of the Battle of Hastings - one of the most important events ever in English history - fails to qualify for proper philatelic commemoration apart from one of those tiresome and enormously overpriced "commemorative sheets".
The Post And Go stamps continue to be issued despite their growing lack of favour among collectors - the subjects for 2016 are eclectic - "Royal Mail Heritage Transport" (17 February), "Ladybirds" (14 September) and "Christmas" (14 November).
New definitive values are scheduled to be released in March or April due to revised postage rates.
So it looks like being a matter of "more of the same".

Two miniature sheets, each of 6 different stamps, were released by India Post on 29 October 2015 to commemorate India's hosting of the Third Africa-India Forum Summit which was held from 26 to 29 October in the Indira Gandhi National Stadium Complex in New Delhi and attended by the leaders of 54 countries. The first miniature sheet was sold for Rs70 (4 x Rs5 and 2 x Rs25) and the second with the same designs but embossed in gold and silver was sold for Rs300. Three of the stamps feature wild mammals of India and the 3 others depict corresponding species from Africa.
The publicity launch involved the Indian primeminister, Shri Narendra Modi, and the tyrant of Zimbabwe, Robert Mugabe, in his role of Chairman of the African Union. Rating:- *****. 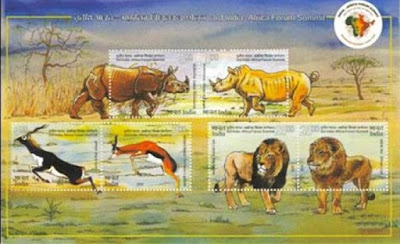 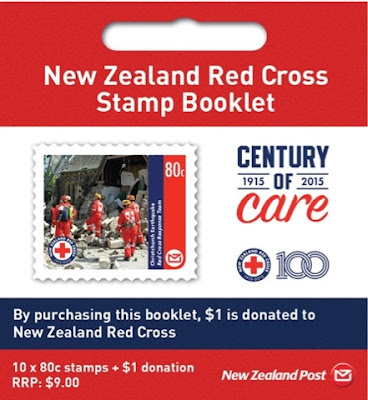 I have not yet mentioned this "Personalised" booklet which is being sold on the New Zealand Post philatelic website for $9 ( total postage of $8 + $1 donation to the New Zealand Red Cross). It has been issued some time during 2015 and contains 10 x 80c stamps in two each of 5 different designs depicting subjects relating to Red Cross activities. I presume this will be included in the annual pack of personalised stamps for 2015 which will doubtless appear in the first few months of 2016. Rating:- ***.

You have to really want to collect Post And Go stamps/labels to be pleased with the products coming out of the Sindelfingen Stamp Fair held from 29 to 31 October 2015 (see Blog 646) since all 4 types of label being sold there by Royal Mail - Machin Head, Union Jack, Heraldic lion and Poppy - were dispensed with the added inscription "Sindelfingen October 2015", this time in new "European Collectors' strips" of 4 values with 2 extra higher values being dispensed separately - making a grand total of 24 new labels to buy. We must remember, as usual with these foreign philatelic exhibition souvenirs, that none of these items had any postal validity in the country in which they were being dispensed for a limited period of 3 days. Rating:- 0.
Presumably we will see another 24 labels in 3 or 4 days time when Royal Mail sets up shop with its kiosks at the Paris philatelic exhibition where the same 4 designs will be put on sale with an inscription relevant to the new location. 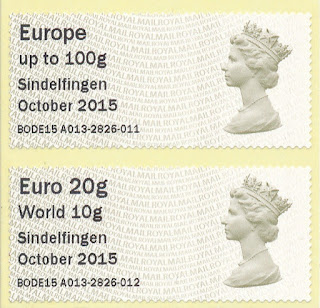 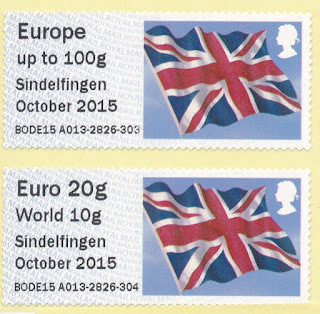 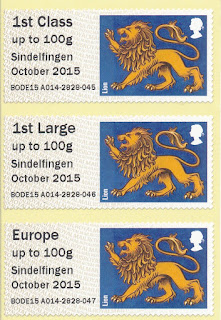 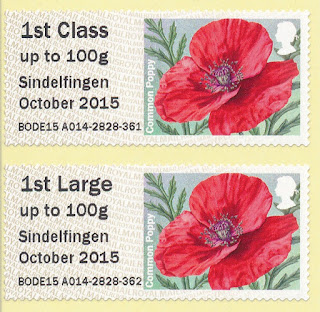 And matters go from bad to worse if you also add the Jersey Post Post And Go products coming out of Sindelfingen because not only did the JE01 kiosk situated there dispense the usual "Jersey Flag" labels as intended (see Blogs 646 and 658) but also in error produced "Collectors' strips" of the "Protected wildlife" labels with added "Sindelfingen" inscription. Thus Jersey Post, intentionally or otherwise, produced 12 new "Post And Go" labels at this exhibition where of course they also had no postal validity. Rating:- 0. 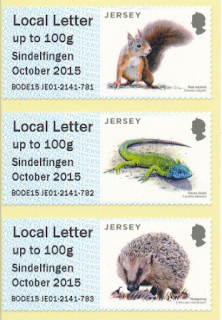 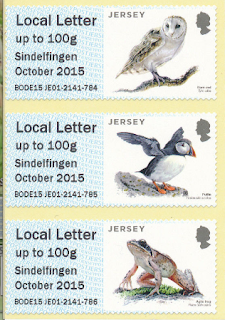