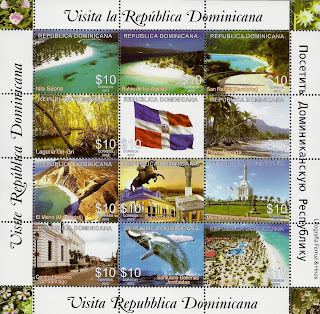 I have already described in Blog 275 how Timor Leste has begun a campaign to gain support for its admission to Commonwealth membership and currently there is a list of applicants and possible applicants - South Sudan, Sudan, Algeria, Madagascar, Yemen, Surinam and Burundi - but I was quite surprised to come across a report from March 2013 that the Foreign Minister of The Dominican Republic had announced that his country would make approaches to The Commonwealth with view to joining the organisation.
He said, "It is a membership that will consolidate our common values that we already share and that, together with Haiti, we must consolidate our democracy, freedom, culture of peace, the rule of law and equality of opportunities." He particularly hoped to gain support from Malaysia, India and Australia in the bid for membership, all countries which have diplomatic representation in Dominican Republic, and thought that Commonwealth membership would help strengthen the country's international connections.
Commonwealth membership by Dominican Republic would not be too menacing a prospect for collectors of Commonwealth stamps since its new stamp issues appear regularly but not excessively and are always on locally relevant subjects. Two issues which have appeared during 2013 are depicted here; above is a sheetlet which promotes Dominican Republic's tourism industry (the country is a favourite destination for British tourists) and a slightly less attractive set of four, shown below, which depicts local arachnids:- 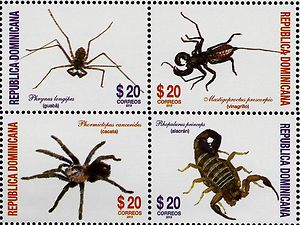 The country's historical connections with Great Britain are not very notable - having been discovered by Christopher Columbus in 1493, the island of Hispaniola became a Spanish colony which became the target of English pirates in the 16th century. On 1 January 1586, Francis Drake attacked the city of Santo Domingo and captured it. After looting the city, Drake ransomed it to the Spanish and after he and his men had started to set fire to the city, the Spanish agreed to pay him 25000 ducats. When Drake had departed, other English pirates moved in to get a share of the action.
During the Protectorate of Oliver Cromwell, English ships landed forces on the island about 30 miles from Santo Domingo on 14 April 1655. The English set out to take the city but 4 days after landing were attacked by a small number of the local population. The English bombarded the city ineffectively and eventually withdrew from the island and sailed to and captured Jamaica instead.
The Dominicans expelled the Spanish from the island in 1865 and established a republic and issued its first postage stamps on 19 October 1865. The first designs depicted the national coat of arms. The British had established postal agencies on the island prior to 1866 but details of 2 offices which were established at Porto Plata and St. Domingo are only known from that year. A number of contemporary British stamps were used from those agencies cancelled with circular date stamps or "C86" (Porto Plata) or "C87" (St. Domingo).  The British stamps were supplied to these agencies from 1869 but both agencies did not operate between 1870 and 1876 and both finally closed in 1881.
Posted by White Knight at 02:41