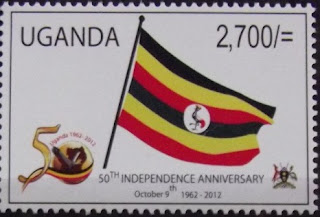 Despite being enmeshed in the tentacles of the Lithuanian Stamp Agents, Stamperija, the Uganda Post Office issued a set of 3 stamps on 9 October 2012 to commemorate the 50th anniversary of the country's independence. Clearly, this particular set was neither designed by nor printed by Stamperija but I note that Stamperija is now offering it for sale on its website to registered dealers though I can not say what price they are being asked to pay for it. I can find only one dealer who is offering it on E Bay (and none on Delcampe) and that dealer, based in China, is asking for more than £20 for the set of three. We will see what price the regular new issue dealers in Britain and the USA will be asking for it. Clearly this is an issue which is actually produced to see use on mail in Uganda so, apart from the AIDS set which was released on 29 March 2012, it will be the only Uganda set from 2012 which I will want to obtain for my collection - though hopefully at a price lower than is currently being asked for on E Bay.

Australia Post issued 5 gummed stamps and 5 self-adhesive stamps in the same designs from a coil on 9 July 2013 to commemorate notable members of the Aborigine community:-

This will be followed up by stamps on the subject of "Headline News" which will be issued on 23 July 2013 and there will be another 3 issues for August, one of which will be a set with the name of Cocos (Keeling) Islands inscribed on the stamps. Australia Post has found that it can create a smokescreen about the total number of issues it is producing by adding the name of Australia's various dependent territories to the stamps, even though they are all issued by Australia Post to whom, no doubt, all profits go. So, in actual fact the company is producing about 3 sets per month, many of them in various formats (gummed, self-adhesive from coils. self-adhesive from booklet, miniature sheet, prestige booklet and so on).
To return to Stamperija and their current pet project which appears to be that Solomon Islands must issue more "stamps" in 2013 than any other country - yes, another issue has been announced! The title of this little lot is, imaginatively, "Various Stamps" and the issue consists of 2 more sheetlets each of 9 different stamps on the subject of the Visit of The Duke And Duchess Of Cambridge to Solomon Islands (a total of 18 "stamps"), 6 sheetlets each of 4 different stamps with 6 accompanying miniature sheets on the following subjects:- Australian fire engines, the 4th Dalai Lama Tenzin Gyatso, 15th anniversary of the death of Mother Theresa, Crabs, British monarchs and 125th anniversary of the birth of Chiang Kai-Shek the former Chinese leader. This collection adds another 42 stamps and 6 miniature sheets (total 48 items) to the total number of items released with the name of Solomon Islands printed on them so that by 10 May, 372 stamps and 86 miniature sheets (total 458 items) have been issued in 2013. Somehow, I don't think that either Royal Mail or Australia Post will be able match that.