On 18 July 2013, the Gibraltar Post Office issued a set of 14 stamps to commemorate the 60th anniversary of the first Gibraltar definitive set of the reign of Queen Elizabeth II. It is not clear to me whether this is meant to be a new definitive set for the territory or just a very expensive commemorative set which is commemorating a definitive set - either way there are £2, £3 and £5 values in the set necessitating collectors to dig deep into their pockets to buy the set. All the designs of the original set which was designed by Norman Cumming are reproduced on the new stamps except that the face value is in decimal currency and, of course, massively increased, and they demonstrate just how wonderful many stamps produced in the George VI and early Elizabeth II period were compared with what is produced for a quick profit in these recent times. Of course the original stamps were also helped by having been printed by intaglio rather than the modern day cost-effective lithography. The current stamps were designed by Stephen Perera and printed by Lowe-Martin:- 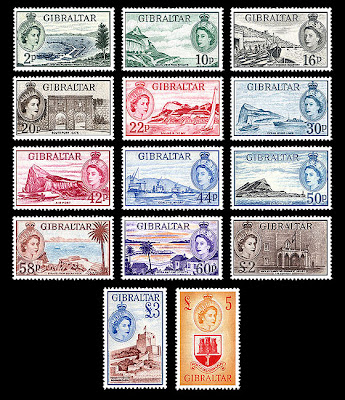 One thing you can say about the Jersey Post Office is that it never lets up, hot on the tail of the Tall ships issue which I mentioned in the Blog 273 comes the news of yet another set of 6 stamps and an accompanying "prestige booklet" which costs a remarkably greedy £15.84 (plus VAT if you are buying it from The United Kingdom). This set's subject is one of the most bizarre that Jersey has ever produced - military vehicles - you would have thought that Jersey saw more than enough military vehicles on its territory during World War II when it was occupied by German troops. But these vehicles are said to belong to collectors (apparently people collect military vehicles - how tame stamp collecting is in comparison) who hire the vehicles out for charity events so I suppose the citizens of Jersey must be quite used to a constant flow of tanks and troop transporters trundling around the country lanes of the island. Actually, it's an interesting enough set with good original art which illustrates the subject well so I shall certainly obtain it for my collection though I shall not bother with the ludicrously expensive prestige booklet just as I have given up buying such items from Isle Of Man, Guernsey and Guernsey Alderney. 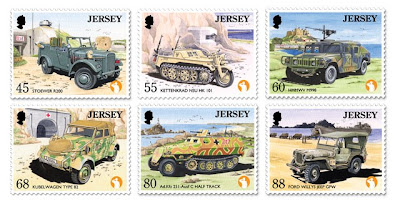 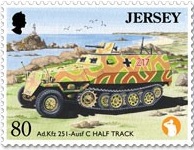 Finally from Malta, something a little more reasonably priced - 2 stamps which were issued on 20 June 2013 which depict local fauna - a rabbit and a Maltese ox. I have mentioned these stamps in a previous blog but now provide illustrations of the very attractive stamps:- 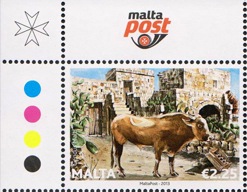