276. Royal Mail New Issue Policy: How Long Can It Last? 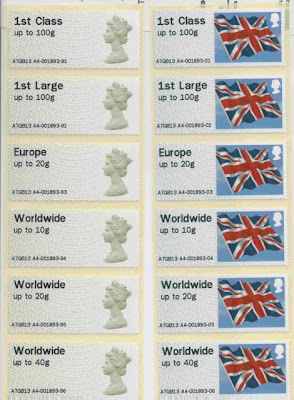 No matter how you look at it, and yes I know that Royal Mail is a business and the point of a business is to make a profit, new issue releases for ordinary collectors of British stamps - the people who want to form as near a complete collection of British stamps as they are able to - are wholly excessive as Royal Mail comes up with more and more philatelic products to sell to collectors and non-collectors alike. A recent sentence in the unmissable Norvic Philatelics Blog states that "They (Royal Mail) no longer build the stamp issue programme around the collectors who want one of everything".

This is dangerous for both collectors and Royal Mail. A business is rather like a political party - both have to attract the support of a wide range of people and not just a loyal core - if a business fails to do so it loses money and if a political party does so it loses votes. But both must look after their core customers/voters - if they lose them then financial failure/political meltdown is staring them in the face. So if Royal Mail fails to think of its long-term regular purchasers in preference for opportunist sales to people who may occasionally buy a souvenir of some celebrity or popular event then the collapse of their philatelic business must eventually occur. A business exists not only to make a profit but also to meet the needs of its customers. If its regular customers feel swamped with products of dubious value and quality then eventually they will refuse to allow themselves to be taken advantage of and will give up customers altogether.
How much more will they take as they find it increasingly expensive and depressing to try to keep their collections up to date? Yes, I know that no-one makes them buy items but collecting naturally involves a psychological state where the collector must do their best to keep their collection as complete as possible - in some ways they are forced to buy items for their collection by the simple fact that those items exist. Postal administrations have only to follow the simple idea that "If you print them, they will buy" and that is exactly what Royal Mail and other greedy postal administrations are doing.
I am driven to write this by exasperation at Royal Mail's latest little tricks - yet more "Post And Go" stamps which were issued on 19 and 20 July 2013 at the York Stamp Fair in the form of the Machin design (6 values) and Union Jack design printed by the itinerant Hytech machines but with, for the first time, the date code MA13 incorporated in the design thus creating 12 new stamps for the devoted collector to buy. It may seem a trivial difference but they know that collectors will want - even need - to obtain these varieties for their collections and thus spend at least another £12 (if they were able to get to the stamp fair or far more if they need to buy them from dealers). So, even if no "overprint" was applied to the stamps the York Stamp Fair has produced 12 new stamps with extremely limited availability and selling, as I write, like hot cakes from the dealers on E Bay who have them to sell.
And then there is the massive increase in numbers of retail booklets which are being produced in 2013 to accompany almost every commemorative set thus producing a self-adhesive version of at least 1 stamp from every set which would not otherwise be obtainable. There is also the increasing numbers of prestige booklets to contend with, each one usually containing new definitive varieties as well as commemoratives.
But the darkness is added to by the news of the Andy Murray miniature sheet which is the first of an ongoing series meaning that we will no doubt have a Tour de France winners miniature sheet (I expect that they will have a combined Bradley Wiggins (2012 winner) and Chris Froom (2013 winner) sheet), an Ashes winners miniature sheet and a British Lions miniature sheet all in the near future. Then of course we will soon have a Royal Baby issue (another miniature sheet I expect). It's all too much. We may have slightly lower numbers of commemorative sets but that is cancelled out by the fact that many sets are now comprised of 10 stamps. There certainly is no doubt that Royal Mail does not build its stamp issue programme around traditional collectors anymore. There are clearly short-term profits to be made by doing so but if traditional collectors are turned away from buying new issues then those profits will not look so impressive. The golden goose is now lying prostrate and gasping desperately. Is the end of new issue collecting just around the corner?