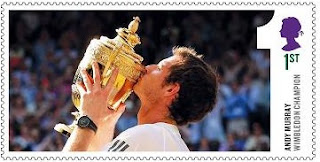 In Blog 271, I bemoaned the fact that the Solomon Islands Post Office was leading the race ahead of Royal Mail to issue far more stamps than any other Commonwealth country during 2013 and concluded, at the risk of being self-referential, that I felt sure that "not to be outdone, that Royal Mail has a few more tricks up its sleeve yet which we will witness as the rest of the year goes by." Little did I expect that we would witness another of these tricks within a few minutes of writing that!
The latest trick is to begin a series of miniature sheets which will be released every time a notable British sporting victory occurs. With a Briton currently leading in the Tour De France cycle race and recent British rugby success and England also leading in The Ashes cricket Test series against Australia you can see where all this is going, can't you?
So it all begins with a miniature sheet, similar to last year's Olympic Gold Medallist miniature sheets, to commemorate the recent winning of the Wimbledon Men's Tennis championships by Andrew Murray. The miniature sheet contains 4 different stamps with scenes from the final and was designed by  hat-trick and is lithographed by International Security Printers (previously named Walsall Security Printers).
There is no doubt that the issue will be popular with the members of the British public who hold the Wimbledon tennis tournament in a special place in their hearts - usually middle-aged, middle class single women who will want to buy one of these miniature sheets for their nieces or nephews (not having any children of their own) as a special commemoration of the first British male to win the championship since the days of King Alfred.
Yes, I think Royal Mail is on to a winner with this one. And regular stamp collectors will have to pay the price as usual. Oh by the way, Solomon Islands, look out because Royal Mail is hard on your heels. Perhaps we will have a miniature sheet at the end of the year commemorating Royal Mail's success at issuing more stamps than anyone else during 2013. Now that would be self-referential.