The British postal service, Royal Mail, told collectors last year that it listened to its customers and as a result it was going to reduce the number of special issues it would make in 2013. And indeed, the organisation was true to its word and reduced its number of special stamp issues from 17 issues plus 62 Olympic and Paralympic medal winner issues to just 12 announced special issues (of course we must remember that Royal Mail issued more stamps, miniature sheets and booklets than any other postal administration in The Commonwealth apart from Mozambique during 2012).
Sadly, this "12 issues per year" has proven to be cynical window dressing as the British postal administration has markedly increased the number of stamps per set as well as continuing to increase all the additional items which are valid for postage which need to be bought and placed in the completeist's collection of British stamps for 2013. In fact, even with no Olympic gold medallists to commemorate this year, Royal Mail could well be on its way to producing as many stamps and postally valid items as in 2012. Remarkably, the excellent Norvic Stamps website identified as early as May that in the first 5 months of the year, 42 - yes 42 - new collectable Machin definitives or new Machin definitive varieties had been produced by Royal Mail.
The other sort of definitive - the machine-produced "Post And Go" labels - have also proliferated exhaustingly; if we exclude the 12 labels produced at the Australia 2013 Philatelic Exhibition which were never sold at a British post office in a country where they could be used postally or by the Edinburgh Philatelic Bureau (a different version of the stamps was sold from there), then so far we have had 76 - yes 76 - collectable new Post And Go stamps. Not even Aitutaki, Cook Islands, Penrhyn and Rarotonga combined (with Tonga, Niuafo'ou and Samoa thrown in as well) have managed to issue 118 definitive stamps in the space of 7 months. The latest addition to the Post And Go mayhem were the 6 Freshwater Life Part 2 stamps which were sold at the Midpex Stamp Fair held in Leamington Spa on 6 July 2013 which were printed by Hytech machines rather than the Wincor-Nixdorf machines in which they are printed in ordinary post offices - thus 6 new Post And Go stamps were created. I depict a strip of the 6 Hytech printed Midpex stamps above with a detail of 2 of the values below:- 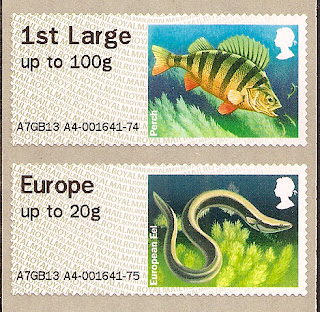 One of the vaguely strange habits of collectors of Post And Go stamps is the need to include in their collections the receipt dispensed by the machine which delivers the stamp - an example is shown below which relates to the Midpex stamps. I see the usefulness of these items since they give a lot of detail about the stamps but the problem with them is that the ink on them fades with age so they will prove to be ephemeral items. A stamp is a receipt for postage paid so I guess that collecting the Post And Go receipts is a form of collecting receipts of receipts! Big fleas. little fleas, ad infinitum etc... 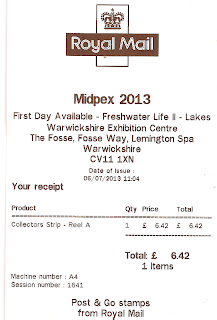 The creation of numerous definitive varieties which devoted collectors will buy undoubtedly and the proliferation of Post And Go stamps leaves Royal Mail laughing all the way to the bank at the cost of collectors' own bank balances. Surely the most joyous sales success for Royal Mail in 2013 will prove to be the vast outpouring of items on the subject of Dr. Who which I have dealt with in previous blogs. To add to previous items on some of the commercially available first day covers for the issue, I now depict a first day cover produced by Buckingham Covers which bears the miniature sheet which contains 5 designs depicting Dr. Who's enemies and his travel machine:- 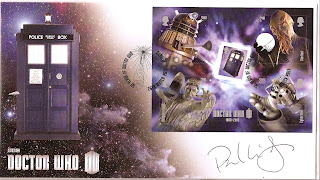 The post mark depicts Dr. Who's sonic screwdriver and is for Cardiff where the studios are located where the television programme is made:- 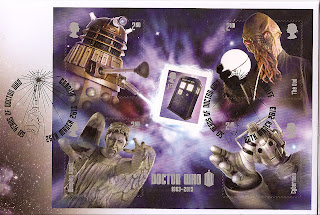 Perhaps most interesting of all is the fact that the covers are autographed by the actor, Paul McGann, whose autograph is much rarer than those of some of the other actors and so this is probably the best of the commercially available miniature sheet first day covers:-

There are still a large number of items to appear from Royal Mail during 2013 - a set of 6 stamps and a miniature sheet and a retail booklet of self-adhesive stamps to be issued on 13 August which will feature automobiles - classic sports cars and service vehicles (one of the miniature sheet designs features a post van which will tie in with the Europa theme for 2013) - the issue commemorates the birth centenary of Henry Royce and the centenary of Aston Martin; on 19 September, 6 stamps, a miniature sheet, a prestige booklet and (probably) another retail booklet will commemorate the bicentenary of the British merchant fleet and the Atlantic and Arctic convoys of the Second World War and on 10 October 2013 Royal mail will issue 10 stamps depicting British dinosaurs. There will be a further Post And Go issue on the subject of Pond Life and Post And Go issues for the Autumn Stampex exhibition and of course there will also be a Christmas issue plus - who knows? - an issue to commemorate the new baby soon to be born to The Duke And Duchess of Cambridge (it's impossible to believe that Royal Mail will miss such an opportunity).
So far, Royal Mail has delivered 207 new stamps, miniature sheets and booklets (I don't even mention "Smilers" and Business sheets) to its collector customers during 2013 - they're just 88 short of last year's total and just under 6 months left to do their worst - come on, Royal Mail, see if you can beat Mozambique this year! That would be something to be proud of! By the way, Mozambique is definitely lagging behind so far with only 176 stamps and miniature sheets announced in 2013. Remarkable - Royal Mail is currently beating Mozambique - what can you say? I guess that "We are only going to release 12 special issues in 2013" is looking a little meaningless and cynical.
Meanwhile, I draw attention to a rather neglected area as far as I am aware. We have heard a lot about Royal Mail's counter printed "Horizon" labels but Britain is not the only country where its post offices use such items in preference to the plethora of commemorative stamps that are produced. Below, I depict a counter-printed label from The Isle Of Man - I have received a number of such items used on ordinary mail to the UK from the island instead of conventional postage stamps and they seem to be more postally significant than the flood of commemorative stamps which pours out from the island:- 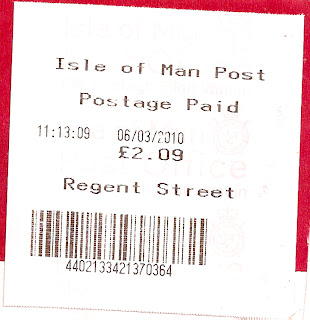 Finally, having moaned so much about Great Britain's current stamp issuing policy, I return to a country whose vast number of new issues in the 1960's and early 70's reminds one so much of what the British postal service is up to today. In Blog 241 I highlighted the set of 6 stamps and 2 miniature sheets which were issued by Umm Al Qiwain to commemorate the 150th anniversary of the British landings in the Gulf area - I have now managed to acquire the set and sheets of what I see as a very interesting set historically and I depict them below:- 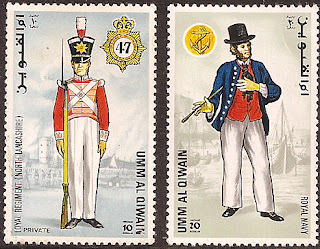 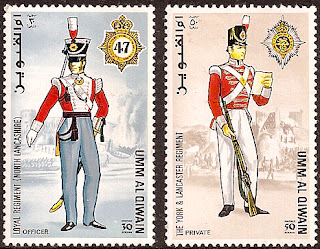 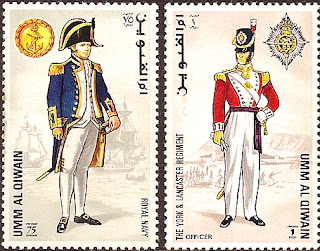 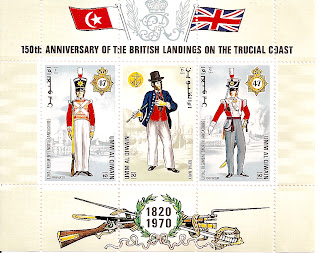 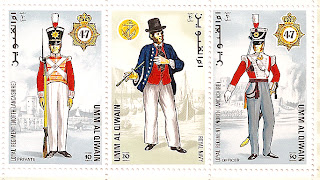 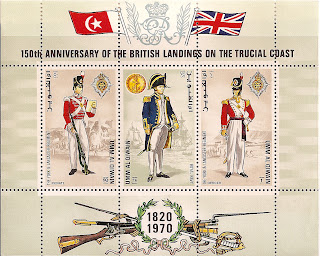