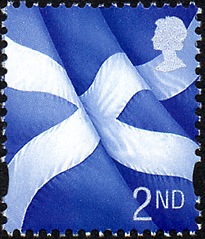 The British Ministry Of Defence has suggested that when Scotland becomes independent in 2017, the nuclear submarine base at Faslane should become a British Sovereign Base similar to the British Sovereign Bases in Cyprus because it would be far too expensive to decommission the base and move it to some other part of the remaining United Kingdom (England, Northern Ireland and Wales). Presumably Faslane would then become a British Overseas Dependency similar to Akrotiri and Dhekelia and its postal service would be delivered by the British Forces Postal Service. In Blogs 218 and 233, I have described some philatelic items relating to Akrotiri and Dhekelia and the establishment of a new British Overseas Dependency (with the unique distinction of being located in the British Isles!) would give collectors an interesting new area to collect and study. In fact it may well be worthwhile trying to obtain pre-independence philatelic material prior to Scotland's independence relevant to the area which may become a new British, er, colony.
Relevant to this subject is the set of 4 stamps which Royal Mail issued on 10 April 2001 which commemorated the centenary of the Royal Navy Submarine Service; a Vanguard Class submarine of 1992 being depicted on the 2nd Class value stamp:-


It surprises me that no-one has yet come up with stamps specifically for use by for the British Forces Postal Service given the number of different places the service operates from. Unless the treaty with Cyprus which established the Sovereign Bases specifically does not allow such stamp issues, I would think that such stamps could be used in the territory as they could on British forces mail from elsewhere in the world including, if the Ministry of Defence gets its way, the new Dependency in independent Scotland. Isn't stamp collecting interesting?
One philatelic agency which seems to appreciate how to make stamp collecting interesting is Pobjoy Stamps which will release some attractive, locally relevant issues for its client territories in the coming weeks. There will be a "mini-bus" issue from Ascension, Falkland Islands and South Georgia And The South Sandwich Islands which will appear on 29 August 2013 which will commemorate the Shallow Marine Survey Group and which will depict various marine life. Each territory will issue 4 different stamps and a sheetlet of 4 sets of stamps in se-tenant format and there will be an additional single miniature sheet which will include 1 £1 stamp from each territory.

They are very attractive designs - by Bee Design - and are lithographed by Cartor. Ascension will also release a set of 6 interesting and attractive stamps on 16 August 2013 which commemorates the return of breeding pairs of frigate birds to the island following a campaign of eradicating local feral cats which had obliterated the previous local frigate bird population. This seems to me like an event well worth celebrating philatelically for a territory such as Ascension and the designs, again by Bee Design, are very appealing. This set is also lithographed by Cartor:- 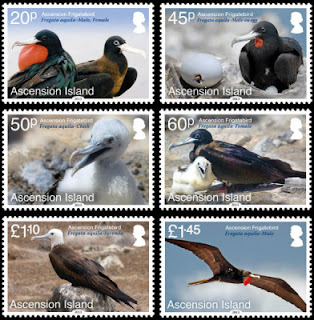