280. Isle Of Man Rushes Out Baby Stamps But Where's The Baby?

The greedy little Isle Of Man Post Office seems to have won the race to cash in on the birth of Prince George of Cambridge by having a commemorative stamp issue available for release on 31 July 2013. The issue comprises a surprisingly modest pair of 2 £1 stamps,  which is a reuse of the designs of the 2 stamps originally issued in miniature sheet format to commemorate the wedding of Prince William and the former Catherine Middleton, now The Duke and Duchess Of Cambridge. For this latest issue, the 2 stamps are joined by a label which states 'ANNOUNCING THE BIRTH OF HRH PRINCE GEORGE ALEXANDER LOUIS OF CAMBRIDGE 22ND JULY 2013".
The stamps are issued in a sheetlet of 8 as shown below but it is worth noting that the Isle Of Man Philatelic Bureau is selling them as a pair for £2 rather than having to buy the whole sheetlet for £8 so for that act of self-restraint the Bureau deserves some praise:- 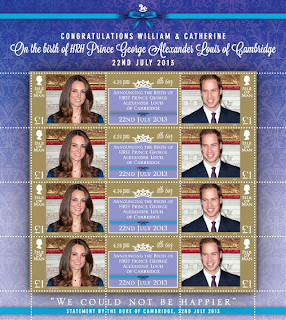 A special souvenir cover is available in a number limited to 500 in which the 2 stamps (presumably extracted from the previous miniature sheets) are cancelled on 22 July 2013, the date of the Prince's birth. A special enough souvenir for any royal devotee and I expect that the price of £25 will not prove to be a barrier to sales of this particular item:- 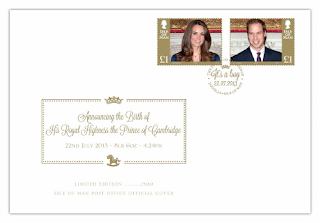 So, The Isle Of Man appears to have won the gold medal in the Royal Baby stamp issue race but I can't help but think that it would have been rather better if the IOM Post Office had held its fire and actually issued stamps with a portrait of the new baby depicted on them. After all, it is Prince George whose birth is supposedly being celebrated by this issue. But I guess we all know that this is just a stop-gap till a set which actually depicts the baby can be finalised, approved and printed and then, no doubt, we will have a second issue to buy which will double the IOM Post Office's Profits and further bleed the pockets of stamp collectors and the public at large.
Posted by White Knight at 08:21