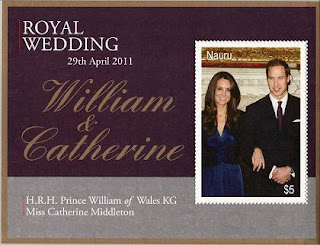 I have had a few philatelic questions on my mind recently which all begin with the line "Whatever happened to....?" Some stamp issuing territories seem to have disappeared off the face of the new issue map over the last couple of years. What Happened? Perhaps someone out there knows the answer. Firstly, Nauru which seemed to have been trundling along happily under the guidance of the philatelic agents, CASCO, but has not issued any stamps now for 2 years. The very last issues were the Russian space issue which was released on 12 April 2011 and which has been discussed in a previous blog and just a few days after that, on 29 April 2011, a single miniature sheet was issued to commemorate the royal wedding of The Duke And Duchess Of Cambridge. Nothing has appeared since then and one can not help but get the feeling that, as in the case of Tuvalu and Samoa and others, the production of stamp issues is just too expensive for the Nauru Post Office unless someone else produces them on their behalf. Even now you feel that there must be one of the less scrupulous philatelic agencies rearing its ugly head, praying mantis-like, over  Nauru and hoping to gobble up responsibility for its philatelic new issues and begin a flood of sheetlets and miniature sheets with the name of Nauru printed on them, the profits from which go straight to the philatelic agency after a small payment has been made to the Post Office. Let us hope that I am just letting my imagination run wild in this case.
Whatever happened to British Indian Ocean Territory? Its last issue, too, was released on 29 April 2011 to commemorate the Royal Wedding with no news of any new issues since then, not even to commemorate The Queen's Diamond Jubilee. Could those who administer the BIOT Post Office be thinking of changing its philatelic agents as a number of other British territories have done in recent years - usually from CASCO to Pobjoy stamps? Time will tell no doubt. 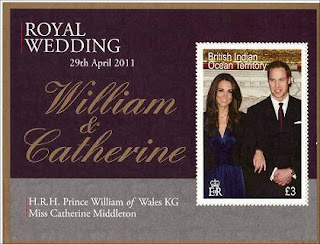 Whatever happened to The British Virgin Islands? This is one of the territories which changed its philatelic agents from CASCO to Pobjoy Stamps about a year ago, but I have not yet seen any news of new stamps being released by The BVI. Just like BIOT, the last issue from BVI was the Royal Wedding issue of 29 April 2011 with nothing appearing since including, again, no issue for the Diamond Jubilee. I imagine it takes time for a new agency to prepare stamps for a new client and the client then has to approve the plans and designs and that, no doubt in some cases can be a rather bureaucratic process, but it is taking rather a long time for BVI to issue some new stamps. There must be something happening in the islands that is worth commemorating. Perhaps we will see a set to commemorate the 60th anniversary of the Coronation and, probably, the birth of Prince George of Cambridge and the territory has just been holding its philatelic gunfire so as not to flood collectors with new issues (if so, I would welcome other countries following BVI's example). 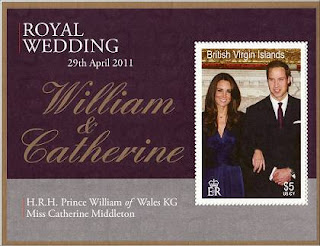 Whatever happened to Guernsey's set of 6 stamps and Prestige Booklet which were due to be issued on 31 July 2013 to commemorate the 50th anniversary of the musical performance given by the British musical group, The Beatles in Guernsey? This issue seems to have disappeared from the stamp programme for 2013 which appears on the Guernsey Post Office website and does not appear on the list of issues which it is offering for sale from 31 July. Perhaps problems have arisen with the production of the issue but I have not found any explanation. Perhaps someone can let me know. 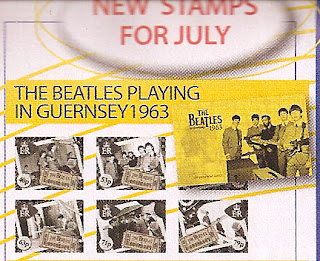 Finally, whatever happened to the issue which was due to be released at the end of last year by Grenada to commemorate the island's Olympic gold medal-winning athlete, Kirani James? When I visited Grenada in November last year I was told that supplies of the stamps had arrived on the island and the Post Office was awaiting approval to put them on sale. Since then, I am not aware of any news about them and Grenada's New York-based philatelic agent has not listed them on its website. Perhaps the designs met local disapproval or the Post Office there intends to put them on sale on the first anniversary of Kirani James' victory which will occur in the next few days. As I wrote previously, time will tell or maybe some-one knows the answer.