Rarotonga Listed As A New Philatelic Entity By Gibbons.

I was rather surprised when recently reading the catalogue column of the February 2012 edition of Gibbons Stamp Monthly to find that a new philatelic entity had been added - that of the capital island of The Cook Islands, Rarotonga. The philatelic agency which has produced stamps with The Cook Islands name on them for the past couple of years or so, released 15 stamps and a large sheetlet inscribed "Rarotonga Cook Islands" on 22 July 2011, with the sensible subject of tourism as a basis for their designs. There really does not seem to have been any justifiable reason for a separate issue for Rarotonga since no political change had occurred nor a separate postal service had been established - it was rather like Royal Mail producing separate issues for London (let's hope it does not give them the idea to do so). It does seem very surprising that the editor of the Gibbons Catalogue would accord this artificial entity a separate listing especially as separate island issues have been ignored by the catalogue since the mid-1980's - entities such as the individual items of Tuvalu or St. Vincent or The Cayes Of Belize. In recent times the issues of The Cook Islands have had quite a high profile in Gibbons Stamp Monthly with quite a large article being published last year about the new issues of the territory and the royal engagement sheetlet being given free with the magazine (although rather unhelpfully the sheetlet was divided into two and its distribution occurred over 2 consecutive months meaning the recipients of the free gift ended up with 2 pieces of the sheetlet rather than an intact philatelic item). Perhaps this exposure to these recent Cook Islands issues convinced the editor that Rarotonga deserved to be treated differently from the individual islands of other countries. The stamps are therefore numbered 1 - 15 plus MS16 which in itself is strange since from 1919 until 1931 all Cook Islands stamps were inscribed "Rarotonga" even though they were for use throughout all the islands.

Rarotongan sunsets (or sunrises or both). 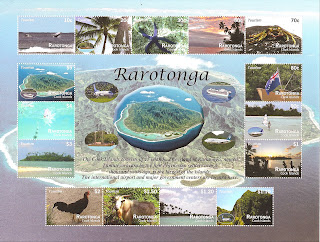 Anyway, there we have it - a new entity (or new old entity) for Commonwealth stamp collectors to add to their albums. Perhaps, for consistency, the catalogue editor should reconsider the status of the stamps of some of the entities created in the past although, like the present Rarotonga, there was no justifiable reason for their names to be inscribed on postage stamps. I think the most worthy of all for reconsideration in this new "catalogue anything" culture are the emphemeral Cayes Of Belize stamps with which I will deal in the next blog. 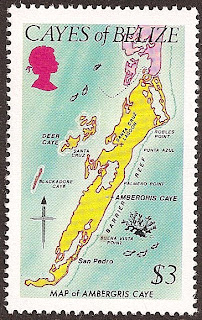