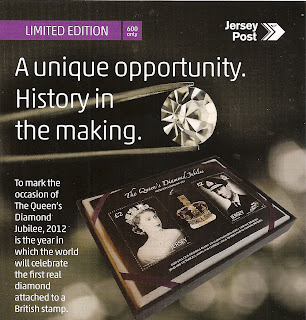 Those who dream up Jersey's stamp issues have a lot to answer for (see my blog of 27 November 2011) but the latest bright idea is staggering. The Jersey Post Office has announced that it will release a special version of the Diamond Jubilee miniature sheet in which the stamp which depicts Queen Elizabeth will contain a real 1.25mm sized diamond situated in the crown the Queen is wearing in the photograph. The "limited edition" special miniature sheet - only 600 are being produced - will sell for £125 plus £6.95p postage (they won't even allow free postage on this staggeringly expensive item) and, if you live in the United Kingdom the total price is boosted to £158.34 because of the addition of value added tax to the bill. The face value of the miniature sheet is £4 so this must represent the biggest mark up on the price of a philatelic item above its face value in the history of stamp collecting - 3,960%! Somehow, I do not think that this particular item is going to get a catalogue number in Stanley Gibbons Stamp catalogue and thus the obsessional completists among us will be spared the need to obtain this miniature sheet. And at £150+, that is quite a relief. I'm not sure who would really want to buy this item but clearly the Jersey Post Office has identified some potential victims somewhere. Their publicity brochure says that the miniature sheet has a "very special "wow" factor" - I'd say it has a very special "ouch" factor. However, if you must have one of these items which is "presented in a deluxe presentation box accompanied by a numbered certificate", remember that with only 600 being produced "it's first come, first served", so, er, don't delay! I don't suppose that there's much chance of any of these turning up used on commercial mail!
Posted by White Knight at 04:23