La Francophonie And The Commonwealth

A couple of days ago I received a letter from Romania whose envelope bore an interesting miniature sheet which had been issued in 2006 to commemorate the holding of the summit meeting of the heads of state and government of La Francophonie, an organisation set up by the French as a copy of The Commonwealth which they must have seen as necessary originally to counterbalance the prestige of the English-speaking organisation. Why the summit meeting was being held in Bucharest, the capital of that well-known French-speaking country, Romania, was something of a mystery to me, so I thought I ought to do some research to enlighten myself a little. 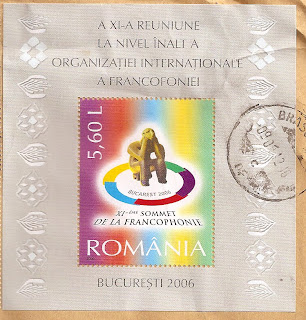 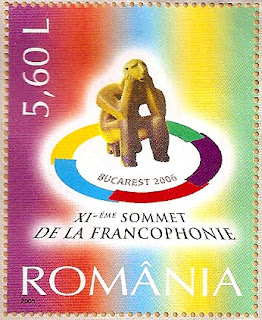 La Francophonie was apparently set up at the Conference of Niamey on 20 March 1970 and now has 56 member states, 3 associate members and 16 observer states. Romania is a full member because (according to Wikipedia) "French is spoken by 24% of the population (presumably, then, the vast majority of Romanians - 76% - do not speak French) and there are historic cultural ties, especially during the late 19th and early 20th centuries". Hmm, I see. Other members include Greece ("French is understood by 8% of the population" - and therefore presumably, not by 92%!), Moldova ("has close ties with Romania"), Macedonia ("French is taught as a second language in many Macedonian schools"), Sao Tome and Principe (former Portugese colony with French-speaking neighbours"(!)) and, best of all, the observer nation, The Czech Republic, where "French is understood by 2% of the population" and not, apparently, by 98%, and Lithunia, which goes one step further, by only having 1% of its population who understand French! The basis for membership of La Francophonie does sound rather bizarre and open to mockery. International diplomacy really is very silly at times. Still, the Romanian stamp I illustrate above is very interesting since it features a splendid piece of stone-age sculpture which, I think, can be seen in the museum in the port of Constanza.

The Commonwealth in contrast has a somewhat longer history than La Francophonie and was established by The Statute of Westminster on 11 December 1931 which acknowledged the independence of the former senior British colonies, then called Dominions (Canada, Australia, New Zealand, Newfoundland, South Africa and Ireland) which became partners of equal status to the United Kingdom in The British Empire. Strangely, no commemorative stamp has ever been issued to celebrate this historic act of parliament. Until India decided to become a republic in 1949, all Commonwealth members acknowledged the British monarch as their head of state and India would have been forced to leave The Commonwealth (as had happened in 1948 when Burma and Israel became republics) and The Commonwealth would have lost half of its population. The Commonwealth prime ministers, following the lead of Louis St. Laurent, the Canadian premier, agreed to The London Declaration which established that the only formal rule for membership would be recognition of The Head Of The Commonwealth which, so far, has always been the British monarch. This was commemorated by Uganda by stamps issued in 2000 which marked "fifty years of the modern Commonwealth".

The meetings of the Commonwealth prime ministers, now called CHOGM (Commonwealth Heads Of Governnment Meeting), stretch back many years and occur every two years. La Francophonie began to copy these prestigious meetings when the first Francophonie summit meeting was held in Quebec from 2 to 4 September 1987. The Bucharest meeting was the 11th such meeting and the most recent summit was held at Montreux in Switzerland in October 2010. One of the most notable CHOGMs was that held in Harare in Zimbabwe in 1991 where a declaration was made which emphasised the importance of Human Rights and Democracy in Commonwealth countries (a somewhat ironic venue given what was to happen in Zimbabwe in later years). 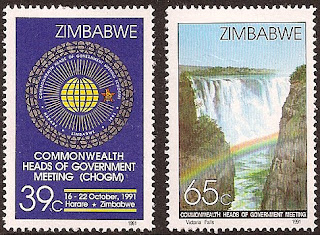 Most host countries of CHOGM have commemorated the meetings in their countries by the issue of stamps including Uganda which was the host nation in 2007. 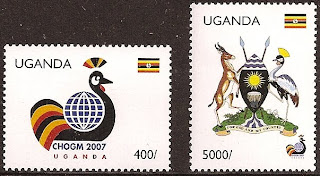 The most recent CHOGM was held in Perth Australia last year and at the meeting the countries which still have the British monarch as their head of state reached an agreement on royal succession so that an older daughter could inherit the throne before a younger son whereas males have always previously had preference. Australia Post issued a single stamp to commemorate the event. 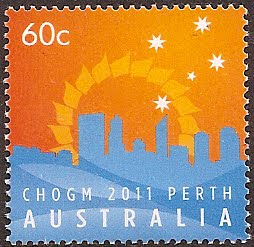 The most recent CHOGM to be held in The United Kingdom was that which took place in Edinburgh in 1997. Surprisingly, Royal Mail did not consider it to be a significant enough event to be worthy of a commemorative stamp issue although the post office did produce a booklet of definitive stamps which contained a large valueless label which drew attention to the event. 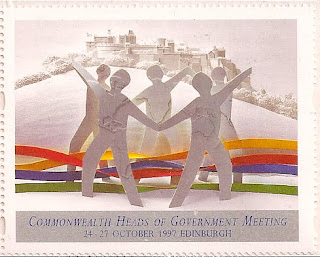 Probably the aspect of The Commonwealth which attracts most attention to the general public is the Commonwealth Games, held every four years, and these are usually commemorated by the issue of a set of stamps by the host nations and sometimes by some of the participants. The stamps illustrated below are 2 of the set of 4 which were issued by Jamaica when that country hosted the games in 1966. I suppose it is not surprising that La Francophonie has felt it necessary to copy The Commonwealth Games by initiating the Francophonie Games in recent years.

Of course, for we stamp collectors, the wide range of territories in The Commonwealth and their long-standing historic relationships with each other, make for the opportunity to accumulate a fascinating and coherent collection of philatelic items without having to worry about whether we should include the latest member state whose only qualifying feature is that 800 people in that country understand English and 6 of them have tried and enjoy Yorkshire pudding!
Posted by White Knight at 02:46