At some time in the future Madagascar may be admitted to membership of The Commonwealth. The country's application for membership goes back some years but political events of recent years have prevented The Commonwealth from taking its application any further for the present. Certainly Madagascar has a good claim to join the organisation since its links with Great Britain go back to the first part of the 19th century and indeed it could be said that were it not for Britain, the country of Madagascar may not have existed at all, certainly in its current form. Relationships between the two countries go back to the Napoleonic Wars when the British smashed French power in the Indian Ocean area and captured Mauritius, Reunion and Seychelles. Although Reunion was returned to the French after the wars were ended, the British held on to the other island groups. Fear that the French or other powers might gain influence in Madagascar thus threatening the route to India and Ceylon led the newly appointed governor of Mauritius, Robert Townsend Farquhar, to seek ways for the British themselves to gain influence on the island and he decided to support the King of Imerina, Radama I, in his claim to be monarch of the whole of Madagascar. On the 23 October 1817, Radama and the British agreed a treaty of friendship and peace in which the British recognised the king as monarch of the entire island. A further treaty of 1820 resulted in Britain recognising Madagascar as an independent state and promised continuing support to Radama's regime whilst, in return, the Malagasy agreed to abolish slavery throughout Radama's realm. Additionally the British granted Radama a stipend of $1000 in gold, $1000 in silver, 100 barrels of gunpowder, 100 English muskets with 1000 flints, 12 sergeants' swords, 600 pieces of cloth, a full dress uniform for the king and two fine horses. Radama admired British methods of education, government and warfare (particularly as it was Britain that had brought low his great hero, Bonaparte) and he wished to modernise his country in the western European style. He became a great Anglophile. In 1820 he encouraged the London Missionary Society to establish churches, and later schools, in Antananrivo, the capital city. Missionaries poured into the island and by 1821 they were exerting notable influence on the king and thousands converted to Christianity. Radama I died on 27 July 1827 and was succeeded by his wife, Ranavalona I. Unlike her late husband, she determined to preserve the cultural and political sovereignty of Madagascar and repudiated the treaties with Britain and prohibited the practice of Christianity in the islands in 1835. British missionaries were expelled from the island and local converts were persecuted in the period which they called "ny tani maizina", "the time when the land was dark". Despite this, ambassadors were sent to European nations in 1836 to 37 and a Malagasy stamp of 1969 shows a painting by Henry Room which depicts the audience of the Malagasy ambassadors with Queen Adelaide, the wife of King William IV, which took place in 1837 (the king himself was sick and dying). 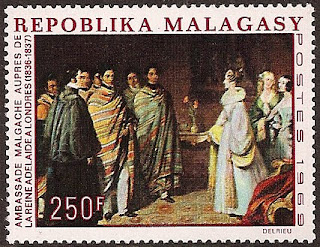 There is a marvelous account of the reign of Ranavalona I in the rather luridly titled book "Female Caligula Ranavalona, The Mad Queen Of Madagascar" by Keith Laidler (published by Wiley, 2005). The monarch died, not before time, on 16 August 1861 and her successor, Radama II, and his successor, Ranavalona II showed themselves more open to French influence rather than returning to a closer relationship with the British. The French grew increasingly rapacious in their wish to seize Madagascar for themselves and, in 1883, conjured up an excuse to invade the island and wage war against the Malagasy. After the war the French seized the northern town of Antsiranana which they called Diego Suarez. Meanwhile, the British community at Antananarivo had established a mail system in May 1883 whereby the post was sent by runner to the British Consulate at Tamatave from where the mail was forwarded by the French post office. In March 1884, W C Pickersgill, the British Vice-Consul, reorganised the service and issued stamps for use on inland and overseas mail. These stamps were usually only gummed in the corners to facilitate the removal of the stamps from overseas mail at Port Louis in Mauritius where they were replaced by Mauritius stamps or at the Vice-Consulate where they were replaced by French stamps for transmission via Tamatave and Reunion. The stamps of the British Consular Mail were suppressed in 1887 although the postal service continued to operate with the charges paid in cash. 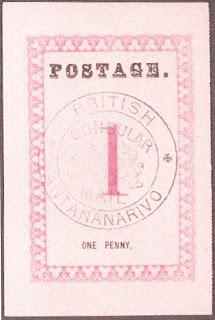 In 1890, the British accepted the formal imposition of a French protectorate on Madagascar in return for French acknowledgment of the British protectorate in Zanzibar (for the same reason the British had ceded the island of Heligoland to the Germans). The Malagasy themselves were less prepared to accept this and the French bombarded and occupied the harbours of Toamasina and Mahajanga in December 1894 and January 1895 respectively. These flagrant acts of imperialism were followed by a French force marching on and attacking Antananarivo with a bombardment of the royal palace which resulted in the deaths of many of the Malagasy. While this assault on the Malagasy was taking place, the government of Queen Ranavalona III agreed that a syndicate of British merchants in the capital, including the Vice-Consul, should operate an inland postal service during the period of the war with France. Mail was sent to Vatomandry and forwarded via Durban where the stamps of Natal were added. The first issue of stamps prepared for the service was typeset by the London Missionary Society Press at Antananarivo in the values of 1d, 4d, 6d, 8d, 1s, 2s and 4s and were released in January 1895. A second issue which had been typographed by John Haddon & Co. of London was released in March 1895 and depicted Malagasy runners in six values:- 2d, 4d, 6d, 1s, 2s and 4s. The French entered the capital on 30 September 1895 and the British inland mail postal service was discontinued. The six values of the second issue are depicted below. 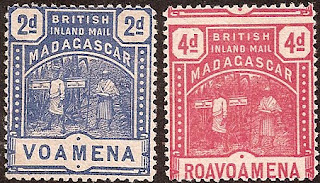 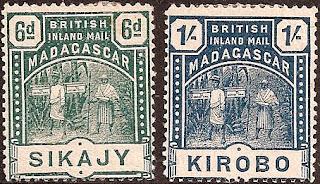 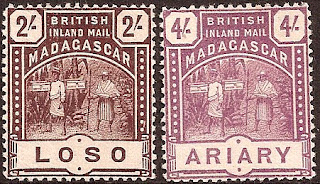 The French imperialistic designs on Madagascar were finally realised when the island was made a French colony on 28 February 1897 and this status was maintained until the Second World War when the French administration in the island remained loyal to the Vichy regime in France which was collaborating with Nazi Germany. It became necessary for the British to once more become involved with Madagascar as it was not possible to allow such a treacherous regime to maintain power in such a strategic place in the Indian Ocean. The British invaded the island in 1942 and occupied the country from 5 May 1942 to 13 October 1946. During this period French stamps were used on post but British censorship was applied. Having defeated the Vichy forces in Madagascar, the British allowed a Free French civil administration to be established in Diego Suarez and Antisarena on 10 September 1942 and on the rest of the island from 7 January 1943. The French finally granted full independence to the island on 26 June 1960.
One can not help but feel that once Madagascar returns to full democracy it should be allowed to join The Commonwealth, certainly there is a vast amount of shared history between the country and Great Britain. The stamp issues mentioned above form a basis for a collection which illustrates the link between Britain and Madagascar and serves as a prequel to any stamp collection which would be formed by Commonwealth stamp collectors if the country is ever allowed to join The Commonwealth.