I recently reported the Jersey Philatelic Bureau's plan to issue a diamond-encrusted stamp in a miniature sheet with the total nominal face value of £4 but which was on sale in Britain for more than £150 (see blog of 27 November 2011). I see now that Australia Post is advertising a miniature sheet inscribed "Christmas Island" which commemorates the Year of the Dragon and which is printed on gold foil. Despite having a nominal face value of $2.40, the item is on sale for $99.95 and is actually described as a "presentation minisheet", being sold in a special display stand. Clearly not meant for use on mail, I am not sure who would want to spend such a large amount of money on this item which is masquerading as a stamp issue. It's not as though Australia Post is modest in its production of ordinary stamps having achieved no. 3 spot in the 2010 table of greediest stamp producers in The Commonwealth, releasing 205 stamps and 14 miniature sheets plus numerous booklets and other items (see blog of 19 October 2011). I think the main worry about this "gold issue" is that someone who does not know better will buy it "as an investment" and then, when they try to realise their investment, they will be disillusioned and turn against stamp collecting. It seems to me that the sale of items like this must represent a degree of desperation felt by Australia Post and other postal administrations as they try to think of innovations (though gold foil stamps are hardly new) to encourage increased sales since they must surely struggle to sell their huge amount of philatelic items to an increasingly disillusioned stamp-buying public, worn down by excessive drains on their ever-reducing finances. Or, perhaps, given the subject matter of the item, Australia Post expect to unload this on a more buoyant Chinese market. Well, we must ask ourselves, what valuable substance will be applied to a stamp next, platinum? uranium? Actually, that would be rather amusing, "the world's first radioactive stamp"! 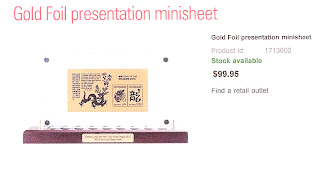 Meanwhile, another surprise innovative issue from an unlikely source:- Cameroun, which has produced a 3-dimensional miniature sheet to add to the ordinarily-printed 4 stamps and 2 miniature sheets produced to commemorate the 40th anniversary of "co-operation" with The People's Republic Of China. The face value is 500F and it is in the same design as the identically valued ordinary miniature sheet featuring the presidents of Cameroun and China shaking hands with each other (see 24 November 2011 blog). It is produced by the same microlenticular method as the 2011 Royal Mail "Thunderbirds" miniature sheet (see 14 January 2011 blog) and is actually really rather effective. This is the first such item to appear on the African pages of my Commonwealth collection and, for once, I have to say it is quite good fun. 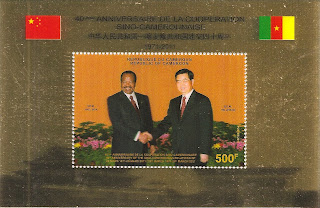