An article which was posted on a website called "Repeating Islands" on the 1 July 2011 noted that a ceremony was held that day on the island of Barbuda for the official naming of Princess Diana Beach to "honor her active role in numerous humanitarian actions". The item noted that this tribute was to be followed by a series of "commemorative endeavours such as a monument, a promotional journal and a commemorative stamp that will be released during Antigua and Barbuda's Independence celebrations in November". The beach to be so commemorated is apparently that which The Princess Of Wales used when she brought her sons on holiday with her to the islands, her last visit being in April 1997, and it was foreseen by Trevor Walker, the Antigua-Barbuda M.P. for Barbuda that the beach would become "a treasured international landmark" and "a lasting memory of the hope that she provided for all". Call me cynical, but that does sound a little too optimistic. Anyway, we do have the "lasting memory" of a new stamp issue arising from out of this as mentioned above and as detailed on another website, "Caribarena Antigua" which described on 17 November 2011 the announcement in the Antigua-Barbudan parliament, which seems to have to approve all new stamps issues (surely they've got more important things to do?), of the issue of the new Princess Diana Beach stamps by the finance minister, Harold Lovell on 16 November 2011. Along with that particular set he also "tabled" a set of "Mushrooms of the Caribbean", a set for the wedding of the Duke and Duchess Of Cambridge (the Duke of course being Diana's son) and a set of "Shells of The Caribbean". The site featured what seemed to be a rather negative reaction to the stamp issues by local inhabitants who posted comments on the site - one called "lovejoy" was fairly succinct, "Well, we are ALL mushrooms, kept in the dark, and fed on horse poo." and another identified as "skyewill" wrote "Those stamps are already paid for if they got to this point. Royal Wedding? Mushrooms? Shells? we got shells? now that real important! and what is the reasoning behind Princess D's?, oh, it have political value? any way it's tabled and I hope it stay tabled forever." I'm not quite sure what the latter commentator was trying to say about the new stamp issues but I think I detect a note of dissatisfaction creeping in there somewhere.
Princess Diana has of course been depicted on numerous Commonwealth stamp issues since her death in 1997 and while the first issues after her death were meant to pay tribute to her, the almost annual releases since then, usually from countries whose stamps are produced by a New York Agency, appear more exploitative than showing any real respect to the unfortunate woman. Antigua-Barbuda's first memorial issue was released on 19 January 1998 and consisted of two sheetlets, each of 6 stamps, and two additional single-stamp miniature sheets. One of the sheetlets, which includes a design of The Princess famously dancing with the then notable movie actor, John Travolta, and the two miniature sheets, one showing her with her two sons and the other with Pope John Paul II, are depicted below. 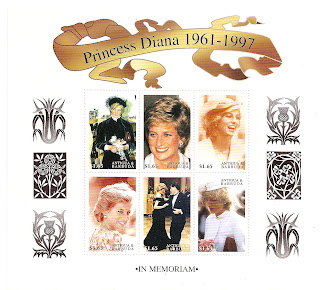 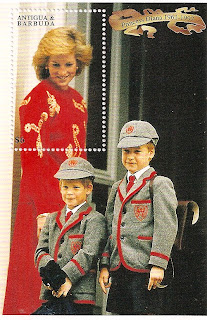 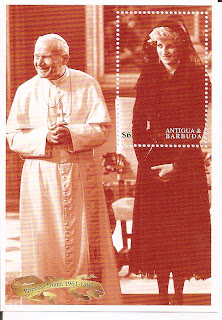 A second issue, released on 24 November 1998, to approximately commemorate the first anniversary of her death in a road accident, was a single sheetlet of six $1.20 stamps, which are actually two designs with the country name either to the left or the right of a portrait of the Princess and with a rather random view of some British scenery, in this case The Palace Of Westminster, in the extended right hand margin of the sheetlet. Interestingly, the Stanley Gibbons Catalogue fails to identify that there are two different stamps in the sheetlet as it does with the stamps of some other territories which were issued in a similar format. The 2 stamps and sheetlet are depicted below. 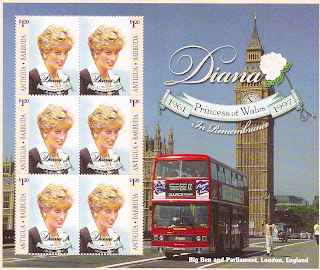 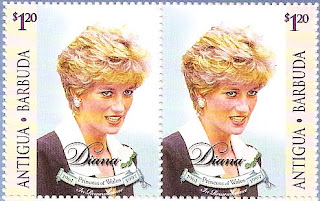 I have not collected any "Princess Diana" issues produced since then but I will obtain the Princess Diana Beach issue when it turns up as on this occasion it seems to have a direct relevance to the country issuing it.
Posted by White Knight at 02:48