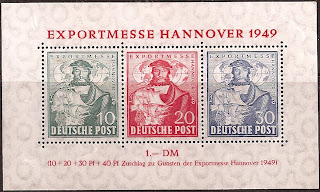 In the course of the history of The British Empire, the British have occupied a large number of countries after they have defeated them and during the periods of occupation, stamps have very frequently been issued which reflect that time of occupation. Thus there were a number of territories occupied by the British during the Boer Wars and First World War which resulted in the release of stamps for use in the occupied territories by the British and these can usually be found in the pages of the Stanley Gibbons Commonwealth Stamp Catalogue (one such issue is the set of eight produced during the occupation of Salonica in 1916, three of which are illustrated below) but some issues have not found their way into The Commonwealth Catalogue even though the territories they were issued in effectively had the same status as those which did find their way into the "Part 1" section - that is - they were under direct rule by a British administration for a period. This is just another example of the many inconsistencies which have gradually built up in the contents of that book.

From 1945 to 1949, the British occupied and were responsible for the government and administration of north-west Germany after the Allied defeat of the Germans in the Second World War. Britain had historic links with that part of Germany since the Kingdom of Hanover and The United Kingdom were ruled together by all the monarchs from George I to William IV and it was only the accession of Queen Victoria which put an end to this arrangement since a woman could not legally rule Hanover. Britain had also ruled the island of Heligoland in the North Sea after it had occupied the former Danish territory on 15 September 1807 during the Napoleonic Wars and subsequently made it a colony in January 1814 following the Treaty Of Kiel. Heligoland issued its first stamps (pictured below) in March 1867 but eventually the colony was ceded, rather against the wishes of the Heligolanders, to Imperial Germany on 9 August 1890. Hitler's Nazi regime issued a stamp in 1940 to commemorate the 50th anniversary of the cession of the territory to Germany (depicted below) 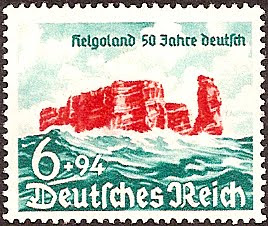 Thus British links with north-west Germany were well established and it seems reasonable that when the three main Allies - The Soviet Union, USA and Great Britain - were dividing up conquered Germany that Britain should take over the part of the countyside where it had those historical links. 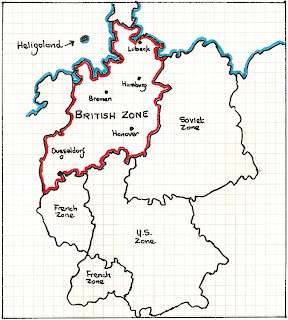 Allied Military Post stamps for all occupation zones, including one that was given to the French to rule, were issued on 1 July 1945 and were typographed by the Bureau of Engraving & Printing in Washington but subsequently six values in the same design were printed in photogravure by the British firm, Harrison and Sons. These were perforated 14 mainly whereas the American printing had been Perf. 11. The Harrison- printed stamps were only issued in the British Zone of Occupation and all the values are depicted below.

This design was used again in a lithograph printing by G. Westerman of Brunswick and included a larger sized 1 reichsmark value. In 1946 the French declined to continue with joint stamp issues with the other zones of occupation and a new numerical design was produced for use in the other three zones in values of 1 pfennig to 1 mark. The stamps were typographed in the State Printing Works in Berlin. Three values in the same design also appeared in a miniature sheet, produced perforate and imperforate, which was sold for 5 marks and issued on 8 December 1946 in the British, US and Soviet zones. 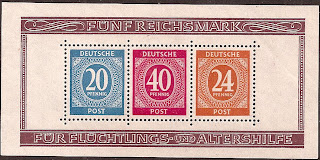 The first commemorative set for use in the British Zone, along with the Soviet and US Zones, was issued on 5 March 1947 and was a beautifully intaglio-printed pair which noted the holding of the Leipzig (in the Soviet Zone) Spring Fair and which depicted medieval scenes of the fair. A set for the same event was also produced in March 1948 as was a pair for the Autumn Fair in September 1947.

A pictorial definitive set for use in the three zones was issued in March 1947 and subsequently overprinted with a design of a stripe of posthorns or multiple posthorns when the British, US and French Zones introduced a reformed currency - the Deutschemark - but the Russians did not participate and they introduced separate issues for The Soviet Zone from 24 June 1948. 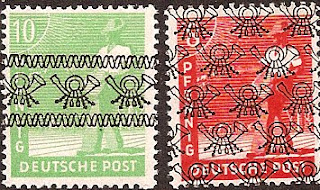 The British Zone continued to issue stamps with the Americans and a new definitive set which featured architecture in the two zones was released from 1 September 1948. A number of joint commemorative issues was made including a pair to note the holding of the Hanover Trade Fair in the British Zone (22 May 1948), a set of four to mark the 700th anniversary of Cologne Cathedral which included a surcharge as a contribution to the restoration fund (12 August 1948), a pair with a surcharge for aid to Berlin, by then isolated by the Soviets (9 December 1948), and a set of three stamps and a miniature sheet to commemorate the 1949 Hanover Trade Fair. The final issue of the British (and US) Zone was made on 15 August 1949 when three stamps were released which commemorated the birth bicentenary of the German poet, Goethe.

The British Zone of Occupation joined with the French and American Zones to form The Federal Republic Of Germany on 21 September 1949 and the stamp issues of the British Zone then ceased. These stamps are an integral part of the history of stamps in the territories controlled by the British Empire at one time or another and, in order to tell the full story, should really be included in any catalogue of Commonwealth stamps whether or not they were used uniquely in British administered territory. The same may be said for the stamps issued during the British Occupation of The Faroe Islands during World War II or in the British-administered Zone of Austria after the same war. They seem equally as valid to have a place in such a book as the British occupation stamps of, say, Batum or Bushire. The period is an interesting time to study and its stamps reflect that fact.
Posted by White Knight at 05:58