The Gilbert Islands in the Pacific Ocean became a sphere of British influence by the Pacific Islands Protection Act of 1857 and in 1877, a High Commissioner was appointed over British subjects in the islands. Christmas and Fanning Islands were annexed in 1888 and a British Protectorate was declared over The Phoenix and The Gilbert And Ellice Islands in 1892. On 1 January 1976, the colony was divided into The Gilbert Islands and Tuvalu, the former Ellice Islands, and on 12 July 1979, The Gilbert Islands were granted independence and became known as The Republic Of Kiribati (pronounced Kiri-bass). The first stamps for use in The Gilbert And Ellice Islands were issued in 1911 and were the half-pence, 1d, 2d, 2d halfpenny, 5d, 6d and 1 shilling values of the contemporary Fiji definitive set with surcharges applied saying "GILBERT&ELLICE/PROTECTORATE" in 2 lines across the stamps. 2011 was therefore the centenary year of the first stamps to be issued either in Tuvalu or Kiribati. It has now come to light that the Kiribati Post Office has issued seven stamps to commemorate this significant postal event for the tiny country although so far I have read nothing to suggest that Tuvalu has done the same although its philatelic agents in New York have found it necessary to produce at least 16 sets of items in 2011 with the name of Tuvalu printed on them which commemorate events of such vital importance to Tuvalu as the women's football world cup final, the meeting of the US President and the Australian prime minister, the 125th anniversary if the Statue of Liberty in New York and the 50th anniversary of the first manned space flight.
The set of stamps produced by Kiribati are old definitive stamps overprinted and surcharged. In some ways, this approach to this commemorative set is very appropriate given that the first Gilbert And Ellice stamps themselves were overprints. However one is bound to notice that the number of new stamps being produced by the Kiribati Post Office has fallen off massively in the past year or so which is pleasing since all its philatelic agents, CASCO, seemed interested in producing for the little territory were stamps which commemorated various British military-related anniversaries and themes - wholly inappropriate for a group of tiny, peaceful islands in the middle of the south pacific area. However Kiribati now seems to be resorting to overprinting old stamps instead of producing new designs and this may be a sign that the islands' post office is strapped for cash and producing new stamps at minimal costs for collectors to spend a lot of money on - the stamp centenary set is quite expensive and includes a $10 value (a considerable mark up on the set of 1911 where the highest value was 1 shilling (5p)).

Earlier in 2011, on 1 June, Kiribati produced an overprint on a 5 year old stamp, to commemorate the beatification of Pope John Paul II. Is this a trend that will continue? 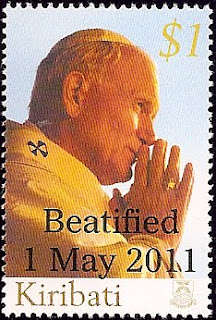 Another Pacific territory which has frequently produced new commemoratives by overprinting old ones in recent years is The Solomon Islands and an example is the miniature sheet produced in 2011 which commemorated the Indipex 2011 Philatelic Exhibition in India but strangely, only the middle stamp was overprinted (and the upper border of the sheet retained the name of Philakorea, the exhibition for which the sheet had originally been released). 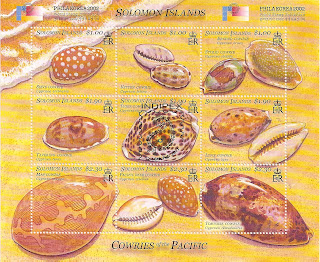 Having said that, The Solomon Islands Post Office has released a number of original design sets in recent times including a miniature sheet marking the translation of the Bible in The Solomon Islands, illustrated below, and three sets of stamps showing portraits of what appears to be randomly selected kings and queens of England, most of whom ruled in that far distant country centuries before Englishmen had any contact with Solomon Islanders. 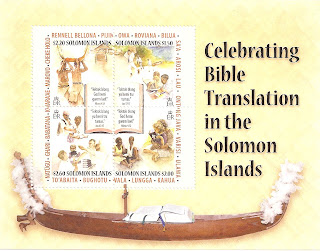 The most recent set of stamps, commemorating the royal wedding - a sheetlet of four and a miniature sheet - has the ominous appearance of having been produced by the New York agency although, pleasingly, I have not seen any evidence that The Solomon Islands has yet stooped to the level of agreeing to the production of numerous items with their country's name on them which bear on them pictures of President Obama, Michael Jackson, Elvis Presley, the Three Stooges, Marilyn Monroe ad infinitum. 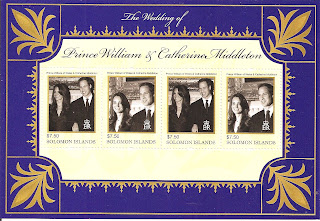 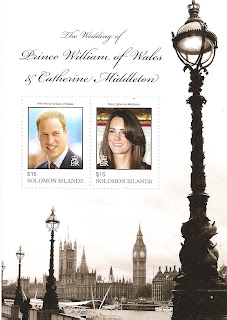 Let us hope that these poor little territories, no matter how cash-strapped they are, manage to retain some integrity and authenticity in their new stamp issue programmes and that they do not go the way of so many other vulnerable islands and nations in Africa and the Caribbean area with their doubtlessly impoverished postal services and sacrifice their national reputations as expressed by their stamp issues for a few thousand dollars.
Posted by White Knight at 03:32