I have already mentioned in a previous blog the gruesome portraits of The Duke & Duchess Of Cambridge that were depicted on the stamps issued by the Cook islands to commemorate the Royal Wedding in 2011. These must have been the worst stamp designs, among a general sea of mediocrity, that were issued by any Commonwealth country to mark the event.

But if they represent poor stamp design and even worse examples of portraiture, The Cook Islands really came out as having the champion bad stamp designs of The Commonwealth in 2011 by issuing not one but two stamps which show nothing but bar-codes! Two miniature sheets were produced each containing two stamps and a label, the first to commemorate the "Year Of Wetlands" and the second, improbably, to exhort Cook Islanders to contribute to a Relief Fund for their much wealthier distant neighbour in The Pacific Ocean, Japan, which as we all know, had experienced a devastating earthquake and tsunami. 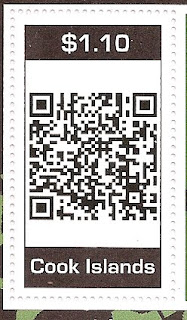 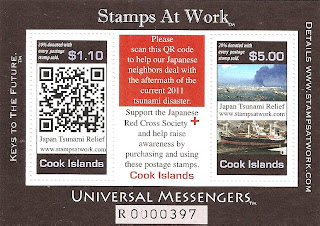 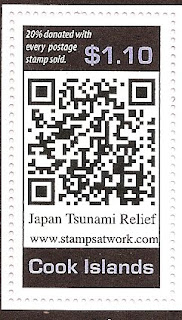 If featuring bar-codes on stamps isn't mad enough, I have to express feeling a certain degree of respect for Tuvalu which has managed to issue a stamp with absolutely no design at all - a completely blank piece of paper (supposedly providing an area for personalisation with the customer's own design) apart from the country's name, coat of arms and stamp value. At least it provides a means of saving money by not having to pay a designer's fee. 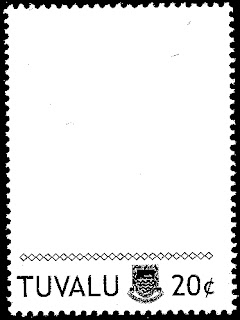 One issue to commemorate the Royal Wedding that has not yet been widely offered for sale is the set of four issued by Anguilla. These have surprisingly high face values ($4, $5, $6 and $10) and I have seen no publicity at all in any philatelic literature about them up to now. The stamps which look as though they were designed by Roger Vigurs who has designed many sets of stamps for Anguilla over the years are quite pleasant if uninspiring. 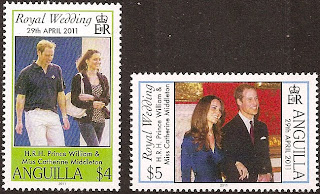 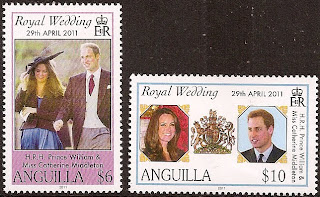 One of my favourite issues which commemorated the Royal Wedding was that released by The Turkish Republic Of Northern Cyprus, a single modest, little stamp, rather crudely printed but which actually looked like a heart-felt tribute rather than yet another piece of exploitation. 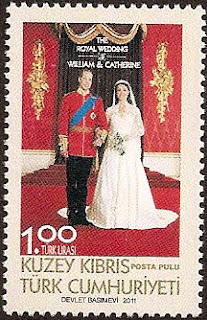 Finally, a thought about the Diamond Jubilee commemoration which will be an excuse for the production of a huge number of stamps from The Commonwealth countries (and other territories no doubt); let us hope that the important royal event is not used in the way Uganda exploited the 25th anniversary of the Queen's coronation in 1978 when a miniature sheet of 4 stamps was produced with a portrait of the monstrous tyrant Idi Amin Dada glowering from the margins. Interestingly, a quite historic item in some ways since no other Ugandan stamps or miniature sheets featured a portrait of the monster which showed considerable unexpected restraint by the dictator when you think how often tyrants like to have their image on display for all to admire and fear. 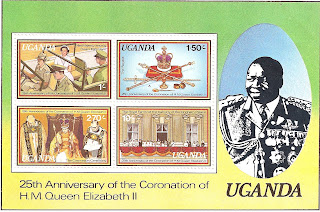