Another example of a failed modern stamp design is the miniature sheet produced with the name of Nevis on it to cash in on the profits to be made from stamps which noted the 85th birthday of Queen Elizabeth II in 2011. This is a particularly uncomplimentary design, picturing in the large margin to the right of the sheet a photograph of the Queen with an especially sour look on her face. Honestly out of the many thousands of photographs which have been taken over the years, could not the "designer" have come up with something a bit better than that? 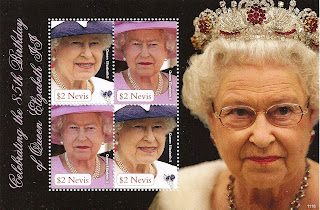 Meanwhile, Montserrat has recently issued 2 stamps and a miniature sheet which commemorate a notable Montserratian, Alphonsus Celeste Edmund Cassell MBE, better known as "Arrow". He died at the age of 60 on 15 September 2010 and since he first performed in a school concert at the age of 10, had been a singer, initially of calypso music and then of soca music (soca is short for 'soul of calypso'). He had been born in Montserrat on 16 November 1949 and was a highly celebrated figure in the small territory. He released his first single record, "Dance With Me, Woman" in 1972 and set up his own record label, Arrow, the following year. His debut album, "The Mighty Arrow on Target", was released in 1974. How pleasing it is to see small territories like Montserrat issuing stamps which feature notable home-grown personalities rather than the constant stream of items which we have seen over the years commemorating Elvis Presley, Marilyn Monroe and so on. This issue of stamps commemorating "Arrow" pleasingly draws attention to the contribution to culture that a little place like Montserrat has made so let us hope we see more countries celebrating their musicians and artists philatelically rather than continuing to feature US personalities who had probably never even heard of the territories whose names appear on the stamps which feature them. 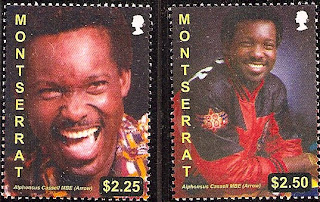 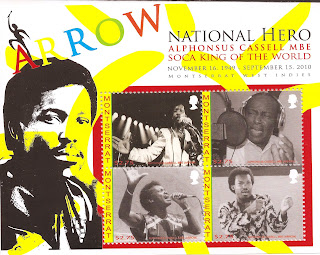 Meanwhile, having recently featured Tuvalu's design-less stamp, I thought I would show that from Dominica which has even less content on it than the Tuvalu item (which included the nation's coat-of-arms in its non-design). All that appears on the Dominica stamps is the country name and the value! 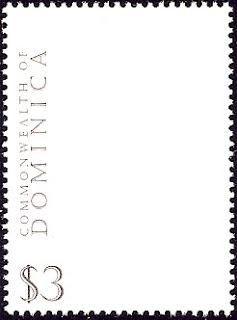 Finally, does anyone know what is happening philatelically in the British dependent territory of The Turks And Caicos Islands? The islands seem not to have issued any stamps since 2008 although you might have expected stamps to be issued to celebrate the royal wedding and the Queen's 85th birthday, if nothing else. One of the last sets to be produced was a sheetlet of six and a miniature sheet (depicted below) to commemorate the centenary of scouting. They had a period from 2003 to 2006 when the same thing happened - that is - no stamps were released and I wrote to their philatelic bureau to make enquiries and some months later I received a reply in the cover illustrated below, which was franked with 3 cheerful stamps from the early 2000's, and included brochures of the upcoming stamps which were released between 2006 and 2008. Perhaps the same thing will happen again. It is hard to believe that the territory will not release stamps to commemorate the Queen's Diamond Jubilee, the London Olympics and, possibly, the bicentenary of Charles Dickens, all of which are coming up in the next few months. 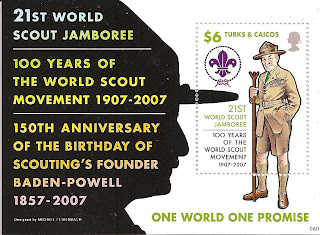