In the past week I have managed to obtain two items which have been missing from my collection for a long time. The first is the very scarce 20c value of the 1996 definitive stamps which depict croton plants. After I wrote my blog about Bequia recently, I thought I would have a look on the internet to see if I could find the 20c value which is not given a price for an unused specimen in the Stanley Gibbons Windward Islands Catalogue (although a used example is priced at a mere £5). I managed to track the stamp down eventually as a single used on cover and on offer by Steven Zirinsky, the excellent New York dealer who also handles the St Vincent provisionals of 1993 to 2004, otherwise so difficult to find, and all for the marvellous price of just $5. A gap in my collection filled with great satisfaction. 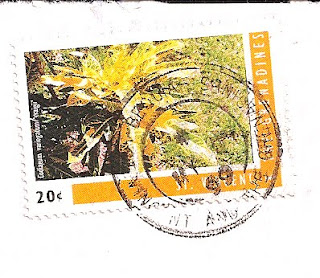 Unused examples of the four highest values of the crotons set are illustrated below.

The other item which I have pleasingly obtained in the past few days is the miniature sheet issued by Sierra Leone on 20 October 2005. This was the first time that I had seen the item being offered for sale since the year of issue. I do not collect most stamps issued by Sierra Leone in the past 20 or 30 years unless they have a strict relevance to the country but the microcredit movement is of great importance to the populations of small, poor countries so I had long decided that this item was one of the few modern issues of Sierra Leone which should find its way into my collection. Unfortuantely it seemed to be the one issue which no dealer was offering for sale. It is a rather strange item in that it features a laughing, blond-haired, unidentified female on all four stamps which the Gibbons West Africa catalogue describes as "portrait of woman at left". I have not discovered how the woman is of relevance to the stamp design - is she someone who has played a major role in the development of the microcredit movement or did the stamp designer just like the look of her and decide to incorporate her picture in the designs? The rest of the designs feature the modest forms of industry of local relevance which microcredit aids as well as part of the United Nations emblem. 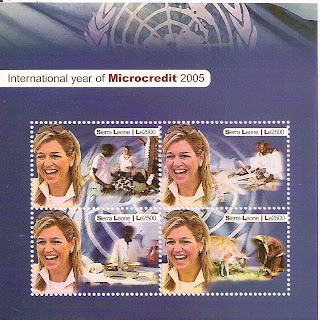 How satisfying it always is when those difficult little items finally turn up to fill those annoying gaps in one's collection. It is moments like that which make the various irritations of collecting anything, including stamps, all worthwhile.
Posted by White Knight at 03:49