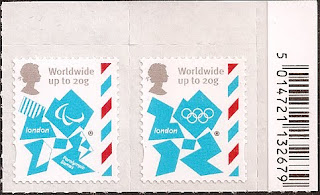 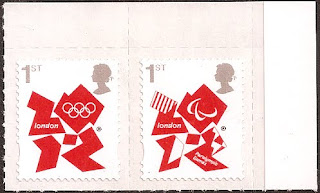 The beginning of 2012 sees post offices rushing to cash in on the potential profits to be made from stamps which commemorate the Olympic Games due to be held in London this summer. No doubt almost all Commonwealth territories will have issued stamps for the sporting event by the time the games take place and collectors of new issues will have been faced with an enormous bill. I seem to remember that the Olympic Games authorities stipulated in 2000 that only territories taking part in the games would be allowed to issue stamps with the official logo on them and that each issue should be confined to a set comprising no more than 4 stamps (apart from the host nation). Royal Mail has certainly made the most of the event to produce 30 stamps plus miniature sheets, booklets, one enormous sheet containing all 30 stamps which does not fit in my stamp album, and I doubt in anybody else's for that matter, as well as numerous paraphilatelic souvenirs based on the stamps issued so far. And now, at the start of Olympic Year, Royal Mail have given us (sorry, are selling to us) four non-definitive "definitives" - that is - 4 stamps described as definitives but which only have an announced life-span of one year before they are withdrawn. Nor are these 4 little gems particularly cheap since two of them cost over a pound each being designated for use on "worldwide mail" up to 20g in weight. They are illustrated above. They are as uninspiring and uninspired as the incomprehensible and too-clever-by-half Olympics logo that they depict. It will take a little more than these to excite the British public to any degree of enthusiasm for the games which is not generally felt in the country except in London of course where all the money is being spent at the cost of the rest of Britain at a time when the money could be better spent propping up the economy and maintaining necessary public services. Royal Mail has also issued two booklets containing these new non-definitive defintives but I have not yet obtained these since my local post office has not been supplied with them and does not expect to be either. This is another example of new British issues not being freely available to the mail-posting public and therefore, in my opinion, qualify to be called "philatelic collectibles with postal validity" rather than true postage items.
Even before Royal Mail issued these stamps on 5 January, the greedy little Isle Of Man Post Office scurried to cash in on the potential Olympics stamps cash-cow by releasing seven stamps, a sheetlet containing 2 sets of the stamps and one miniature sheet, on New Year's Day. The publicity for the issue boasts that the stamps have been designed by Sir Paul Smith who seems to have drawn his inspiration for the set from the thirty Royal Mail stamps since the designs are all in the same style as the British items (although the Manx Post Office publicity states that he was inspired by "his passion for cycling and the Olympic legacy" - the Olympic legacy, I suppose, would be the bill that British people will be paying for the games for the foreseeable future). I am rather ignorant about modern artists and do not know who Sir Paul Smith is but clearly he is someone quite distinguished judging by the way the Manx Post Office drops his name multiple times, not just in their publicity but on the stamps themselves. I am surprised that The Isle Of Man is issuing any stamps at all for this event since it does not send its own team to the games and clearly the number of items being issued far exceeds the strict limit of four stamps. I have not read that the Olympic authorities have changed their rules on commemorative issues for the games but it certainly looks so to judge by The Isle Of Man "products". If so, this is bad news for collectors since unrestricted issuing will doubtlessly prove too much of a temptation for certain philatelic agents (and we know who they are) who will release a tsunami of stamps on to the market in a bid to extract as much money as possible from collectors. The Manx 2-set sheetlet is almost too big to fit into my album and so follows the lead of last year's British sheetlet - I do hope no other postal administration thinks it's a good idea to produce such a monster. And finally, if you just buy one set, one sheetlet and one miniature sheet of the Manx issue it will cost you £17 75p, to which you may add, if you wish and earn the salary of an investment banker or Post Office Chairman, £9 32p for a "first day cover set", £6 08p for a "stampcard set", £24 60p for a "sheet set" pack and, best of all, £50 for a "special collector's pack". Cheap at half the price, you might say. 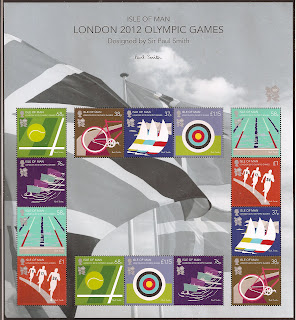 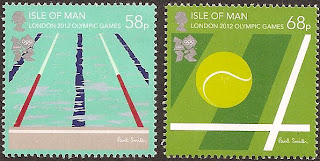 The 2 lowest values of Isle Of Man's Olympic set including the designer's "passion" of cycling (apparently on a pink bike). 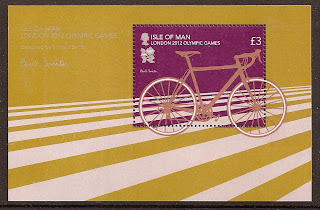