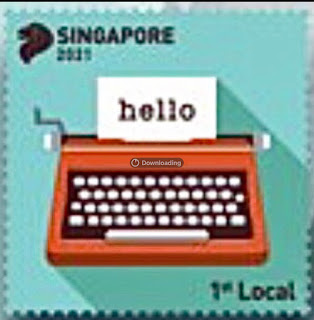 🇸🇬 Singapore Post will issue a set of 10 Greetings stamps on 3 September 2021. This is a bright, cheerful set with some original designs though whether or not Singapore mail senders need to tell their addressees that “You rock” or “You are my sunshine” both in two different ways is questionable. And do people still use typewriters? Further details are awaited. Rating:- ****. 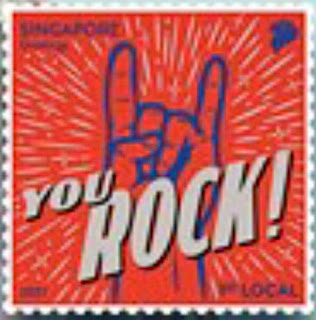 🇺🇸 The philatelic agents, IGPC, will release a stamp on just about any subject if it thinks it will make money for them. Hence stamps on subjects, particularly those relevant to American culture, American ‘personalities’ and US politics, frequently are put out with an eye to selling the products to a gullible US public, most probably not regular stamp collectors, rather than to interesting the mail-sending public of whichever country or territory is unfortunate to have its name printed on the items. IGPC has a longstanding, ever shortening list of ‘client’ postal administrations which are content with the rewards of dealing with IGPC and not at all concerned at the degradation the postal administration is allowing its country name to be subjected to. Money is worth more than national reputation.
IGPC particularly specialises in releasing stamps which depict whichever contemporary mediocre US politician has been elected as President of The United States. The agency shows no political bias - it is happy to depict foul creatures such as Trump or nonentities on the opposite wing of US politics. IGPC has no preferences as long as there is money to be made from producing the stuff and selling it.
Hence there was a rush at the start of 2021 to depict the incoming, unpromising President, the septuagenarian Joseph Biden, who beat Trump in the presidential election held at the end of 2020. The countries’ names which were printed on these products are those which represent the last bastions of IGPC’s influence on Commonwealth new stamp issues - the die-hards you might say - Antigua and Barbuda, The Gambia, Grenada plus the entity of Grenada Carriacou And Petite Martinique, Guyana, Nevis (half of St Kitts And Nevis), St Vincent And The Grenadines and Tuvalu. All these have the honour of featuring Mr Biden and it is possible that these items will be of historical interest in the future given the hapless Biden’s decision to rapidly end US involvement in Afghanistan and the consequent crisis in which the Taliban rapidly overthrew the elected government and precipitated the flight, or attempted flight, from that benighted country of tens of thousands of Afghans. One can just imagine the scene in 300 years time when a historian, specialising in the history of the early 21st century, stumbles upon a little piece of paper which has miraculously survived the ravages of time, and discovers the image of the nonentity who had ruled the USA for a couple of years in the early 2020s, long blamed for causing the shocking events which ravaged the world in that period, and wondering what on earth this piece of paper represented bearing as it did the name of a tiny long-submerged group of islands in the Pacific Ocean.
I do not now usually depict the products of IGPC in this Blog unless there is a good reason to do so but given Biden’s leading role in the terrible current events in Afghanistan it is of interest to see what IGPC items have so far featured this hapless old man, already so soon a disappointment to the well-meaning and naive liberals of the West and the father of so many misfortunes. All of the above mentioned philatelic entities were named on 2 miniature sheets each which commemorated Biden’s inauguration as the 46th President of The United States Of America. Subsequently Biden was also featured on one of a pair of miniature sheets with the name of St Vincent And The Grenadines printed on them which commemorated the Centenary of the establishment of the Tomb of the Unknown Soldier in the United States. On that particular item he is depicted standing beside his Vice President, Kamala Harris. These stamps are interesting to know about but I would not want to spend any money buying any of them.
See Blog 1927. 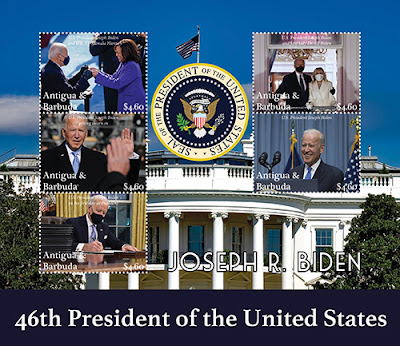 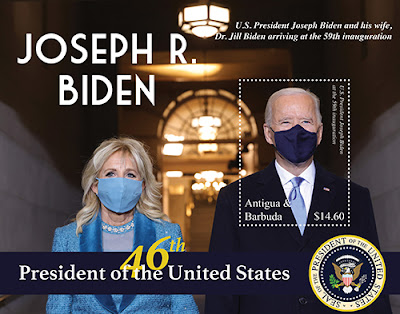 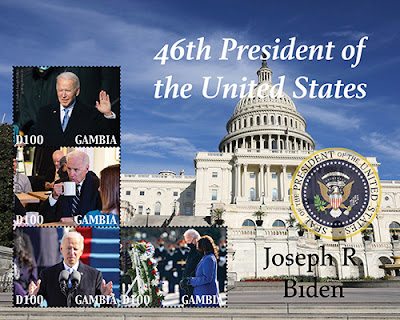 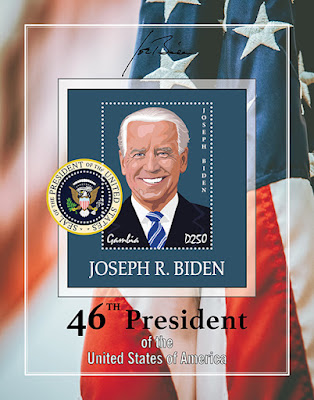 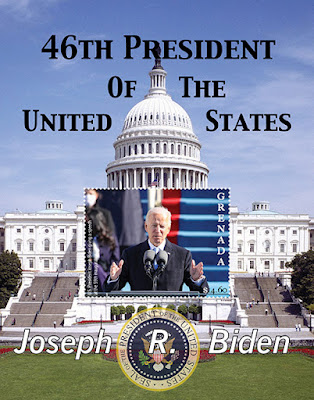 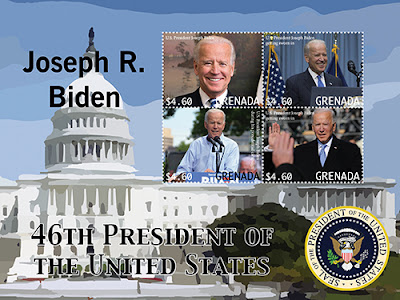 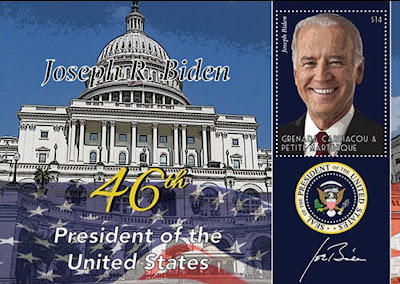 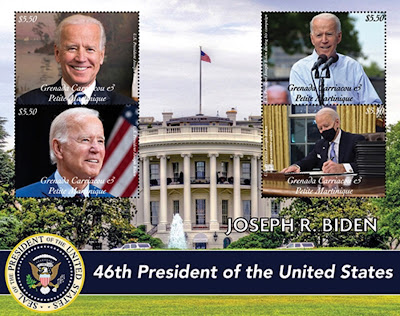 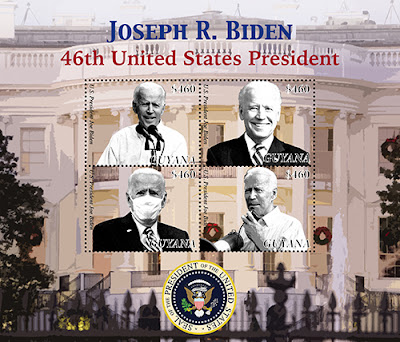 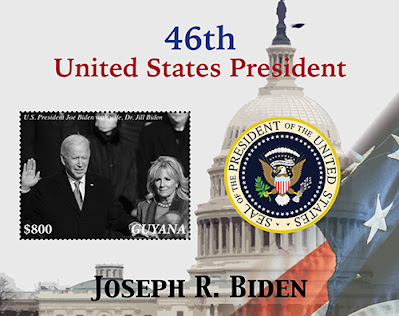 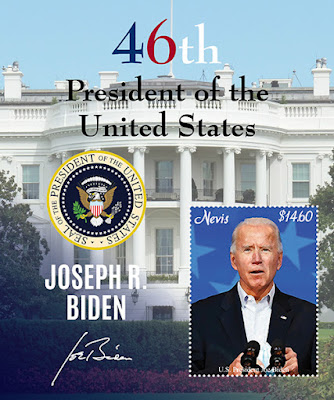 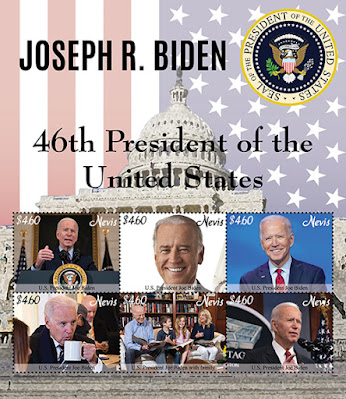 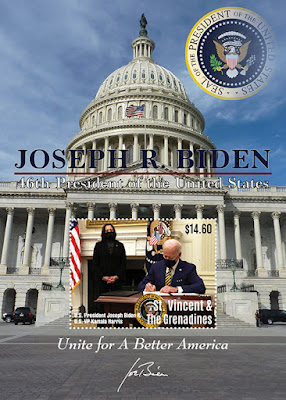 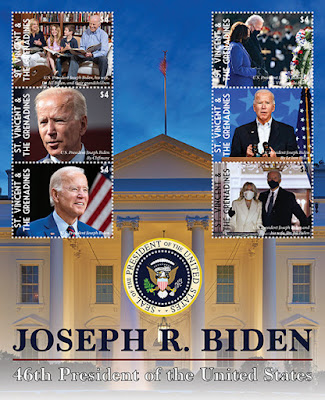 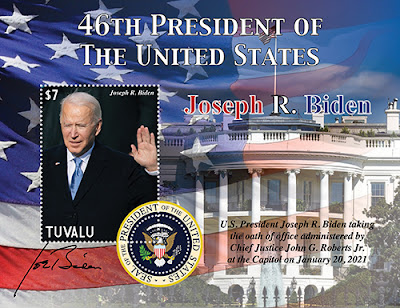 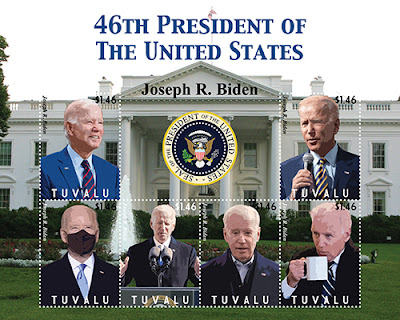 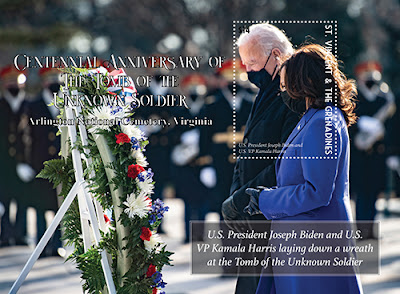 🇦🇫 The stamps of Afghanistan have never been accorded a place in a collection of British Empire and Commonwealth stamps although the British did maintain a form of protectorate over the country from 1880 to 1919. In 1919, after the third Afghan War, the British returned to the Afghans the right to control their own foreign relations and Afghanistan judged that year to be the one when the country became an independent state. I sometimes add stamps to my collection from countries which, although not formally part of the Empire or Commonwealth, have had connections with Britain at some time or the other which are part of the imperial story. I was very interested therefore in a posting on Stampboards by Stewie 1980, who is sometimes good enough to share information of new issues with this Blog, of a previously unknown stamp issued by the Afghan postal service in 2019 which commemorated the Centenary of Afghanistan’s Independence. The stamp depicts a rather splendid photographic portrait of Amanullah Khan who was Emir of Afghanistan from 28 February 1919, and hence ruler when the British returned Afghanistan’s sovereignty to its rulers, until 9 June 1926 when he became King of Afghanistan. Amanullah was forced to abdicate on 14 January 1929.
An interesting stamp and doubtless hard to track down but rather more alluring than countless miniature sheets with the names of tiny distant countries printed on them depicting a failing US president. 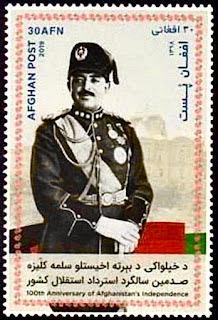