🇱🇹 It’s interesting to note that both of the remaining Commonwealth ‘clients’ of the Lithuania-based producers and purveyors of paraphilatelic material, the notorious Stamperija - the postal services of Maldives and Sierra Leone - have not had stamps offered for sale by the ‘agency’ since those publicised many months ago with ‘dates of issue’ of 21 July 2020 (Maldives) i.e. more than one year ago and 31 August 2020 (Sierra Leone) i.e. almost a whole year ago. This appears to be good news and it is to be hoped, just as Solomon Islands and Uganda have done before, that these two postal administrations have purged themselves of that parasitic ‘agency’ but alas it is not unknown in medicine for parasites to reinfect their hosts. Let us hope that we have now seen the back of Stamperija’s products at least as far as issues of any Commonwealth postal administrations are concerned.

The history of Afghanistan has long been tangled up with that of the British Empire. The Afghans fought three wars against the British - two in the nineteenth century and the third in 1919. Generally the British did not come very well of out their attempts to control Afghanistan as part of their determination to keep the Russians away from the borders of the Indian Empire - the Great Game wherein Central Asia became a chess board for the struggle between British and Russian imperialism.

At the end of the Second Afghan war (November 1878 to September 1890) the British had manoeuvred themselves into a position which suited them since Afghanistan, though not a formal part of the British Empire, had a become a client state of Great Britain and the British controlled Afghan foreign relations hence ensuring the Russians were unable to establish themselves on India’s borders.

The first postage stamp of Afghanistan dates back to 1871 and was the highly distinctive Tiger’s head design:- 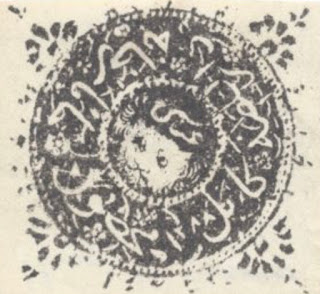 After the end of the First World War, the ruler Habibullah was assassinated and a struggle for power ensued with his son Amanullah emerging as ruler. As a diversion from his troubles at home Amanullah launched an invasion of British India but was eventually pushed back inside the borders between India and Afghanistan thus confirming the borders preferred by the British. However the British were now able to allow Afghanistan to take over control of its own foreign policies and for this reason 1919 is viewed in the country as the year it regained its independence.

The country remained relatively stable for decades until the King was overthrown in 1973 and a republic was established. In 1978 President Daoud was assassinated and another coup brought Nur Mohammed Taraki to power and in 1979 Hafizullah Amin overthrew Taraki and killed him and set up a communist regime. Hafizullah’s regime established a reign of terror in the country and suppressed Islam. The resulting unrest threatening the government led to an armed invasion by forces of The Soviet Union to support the regime. Hafizullah was killed and replaced by Barbrak Kamal who held power until 1986 when he was replaced by Najibullah. The Soviet occupation was resisted by the Mujahideen, heavily backed by the Americans and the western allies, and a vicious war resulted with the Soviets losing large numbers of men and being forced to withdraw eventually in 1989. Najibullah’s regime attempted to deal with the ongoing civil war but the Mujahideen successfully defeated his forces and took power in 1992. Najibullah took refuge in a United Nations compound in Kabul.

The Mujahideen government itself was overthrown by the harsh and brutal Islamic fundamentalist Taliban in 1996. One of its first victims was Najibullah who was kidnapped from the UN compound, castrated and tortured to death, his body left hanging from a street lamp along with that of his brother. The Taliban regime established an Emirate with Mullah Omar as its leader. Its cruel and medieval policies and activities are well known but it made the fatal error of allowing the terrorist Osama bin Laden, leader of al-Qaeda, to operate from its territory. After bin Laden’s shocking assault on The United States on 11 September 2001, the United States and its allies invaded Afghanistan and displaced the Taliban regime with the result that a relative degree of democracy was brought to the country along with more liberal life styles.

Two stamps of 2002 issued after the overthrow of the Taliban - the first commemorates the 1st anniversary of the Loya Jurga (convention to discuss the country’s future) and the second celebrates National reconciliation:- 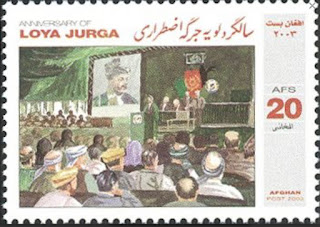 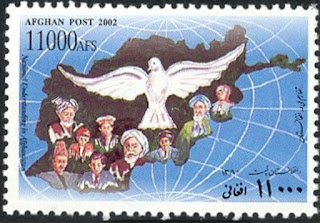 The elderly US President Biden who took office in 2021 resolved to have all American troops out of Afghanistan by the twentieth anniversary of the 11 September atrocities feeling sure that the Afghan government’s forces which had been trained by the United States and its allies could hold back the Taliban forces. The hapless Biden along with the rest of the world was shocked by how quickly the Taliban retook the country with the departure of US troops and those of their allies, including The United Kingdom. Taliban forces entered Kabul on 15 August 2021, President Ashraf Ghani having fled, wisely one suspects given how the Taliban had dealt with Najibullah, to neighbouring Tajikistan. Thus the twenty year conflict between the Taliban and the Afghan liberalisers ended in an appalling defeat for The United States and its western allies with the potential consequences for the Afghan people and the world in general hanging like a sword of Damocles over the future. One suspects that Biden did not imagine that on the 20th anniversary of ‘9/11’ a Taliban government would once more been sitting in power in Kabul inflicting its harsh, cruel and medieval ways on the Afghan people and potentially posing a threat to Biden and his allies if the Taliban allow terrorists to flourish once more in their country.

The last postage stamp released by Afghan Post in 2021 before the return of the Taliban to power in Kabul. The stamp commemorates the humanitarian services of Tetsu Makamura:- 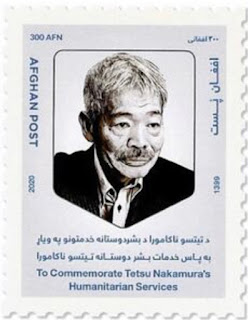