🇨🇾 Cyprus Post’s next issues to be released on 9 July 2020 are made up of a set of 3 stamps marking notable local anniversaries and a single stamp which is the Cyprus contribution to this year’s Euromed omnibus series from postal administrations whose countries border the Mediterranean Sea.

It’s interesting how societies mould their views of history to react to their current ethical, political, cultural and social beliefs. Thus an individual who is viewed as a great hero and philanthropist in a city in one century may be viewed by the majority of the inhabitants of that city, and of wider national and even international society, as an evil villain 200 years later because he lived by the values and carried out deeds acceptable in his time which society views, two centuries on, as unacceptable and appalling, even abhorrent, without taking into account the changed values. Thus a statue may be erected to a hero by public acclaim and several generations later be brutally torn down by the descendants of that public as the hero’s reputation changes to that of a villain. Such is history. We write the history that suits us and fits in with our needs.

Of course history is also moulded, particularly by ‘young’ countries, to provide the basis for a national story which is vital for the establishment of a national identity without which a sovereign state can not survive in its entirety for very long. Sometimes heroes become villains and sometimes villains become heroes. ‘Terrorists’ become ‘heroes of liberation struggles’. Margaret Thatcher thought that Nelson Mandela was a terrorist. History now tells a different story.

The first stamp of the Anniversaries set from Cyprus Post commemorates the 65th anniversary of the founding of EOKA, a terrorist organisation, or if you wish, a guerrilla liberation organisation, which was founded in 1955 by the former Greek army officer George Grivas to resist British rule in Cyprus and achieve the Union of Cyprus with Greece, Enosis. The organisation launched a campaign of bombings, murders and assassinations against the British administration and forces in the island and when the British hanged two of the men who were carrying out these activities, Grivas ordered the execution of two captured British soldiers. The Turkish Cypriot community saw a threat to themselves if Cyprus achieved Enosis and generally supported the British against the Greek Cypriot community and a growing divide between the two communities took place.
The Greek Cypriot leader, Archbishop Makarios III, sought a more peaceful solution to the problem which would limit the campaign to acts of sabotage but the British exiled him in 1956 for a while to Seychelles. This triggered a general strike and a much higher level of EOKA activity which included an assassination attempt on the life of the British Governor, John Harding, and the killing of 2 British soldiers per week on average. In the immediate period EOKA carried out 104 house bombings, 403 ambushes, 35 attacks on the police, 136 acts of sabotage, 38 attacks on soldiers and staged 53 riots. At this point Grivas began to target Turkish community policemen which led to inter-communal riots  and a series of strikes.
The EOKA campaign continued and it became obvious that the British would never achieve a successful military outcome and in late 1958, Archbishop Makarios began to shift his stance from Enosis to Cyprus becoming an independent sovereign state. The Cypriot people were becoming exhausted by the continuing conflict and influential Greek Cypriot community members supported Makarios and EOKA began to lose its broad support base. On 5 December 1958 representatives of the Greek and Turkish governments accepted the London-Zurich Agreements which negotiated the establishment of a State of Cyprus and on 9 March 1959 Grivas released a pamphlet accepting the outcome of the Agreements.
The activities of EOKA had resulted in the deaths of 104 British soldiers, 54 policemen including 15 Greek Cypriots, 22 Turkish Cypriots and 12 British) and 238 civilians (203 Greek Cypriots, 7 Turkish Cypriots and 26 British).
The authorities of The Republic of Cyprus consider the EOKA struggle as a struggle of national liberation and its members as heroic freedom fighters. 1 April, the day of the start of the EOKA campaign, is considered to be a national anniversary in the Republic of Cyprus but not in the area of the island called The Turkish Republic of Northern Cyprus.
The 34c value of the new set commemorates the 75th anniversary of the commencement of the EOKA campaign:- 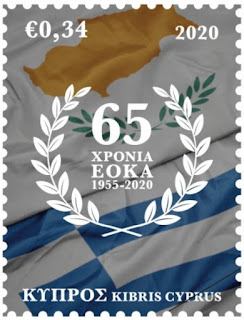 The second value commemorates the 25th anniversary of the founding of Melathron Agoniston EOKA, an organisation founded by former members of EOKA to provide health care, medical care and decent living for members in the last stages of their lives. 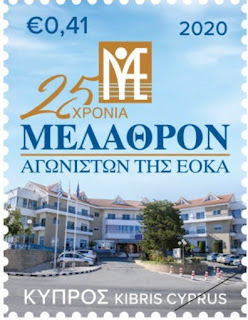 The final value of the set commemorates the 60th anniversary of OEB, the Employers and Industrialists Federation. 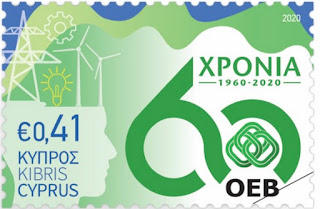 The second release, the Euromed issue, is on the theme of Traditional Gastronomy, which is an apt subject for a collection of Mediterranean countries to celebrate on their postage stamps. The single stamp depicts kolokasi which is taro root, a tropical plant grown for its edible corms and thought to have been one of the earliest plants cultivated by humans. The Cyprus Tourist Office gives a recipe for use of the vegetable in a stew with belly pork or shoulder of pork and very tasty it looks too. I think that is the dish actually depicted on the stamp. Rating:- ***** (for both the stamp and the dish). 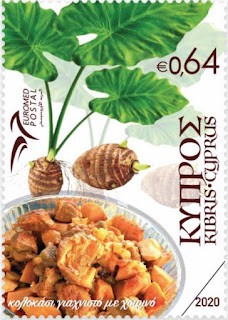 🇺🇸 Following on from Blog 1691, where I illustrated the Chinese New Year single stamp miniature sheet issued by IGPC on 24 March 2020, I now add an illustration of the 4 stamp miniature sheet. The name of Guyana is printed on the item. It’s hard to believe that anyone would spend their money on such stuff. Rating:- 0. 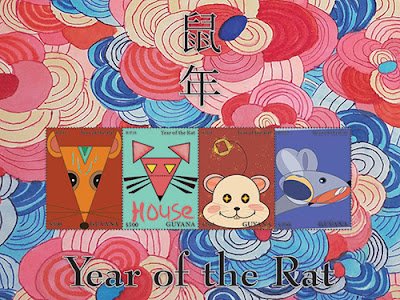