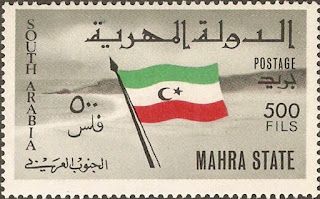 🇾🇪 With the news here in England telling us little about what is happening in the rest of the world unless it is to do with the COVID-19 pandemic or the Black Lives Matter campaign, this fascinating piece of news would have passed me by had it not been for a comment just published on Stamp Boards by saifbeg. The comment points out that the island of Socotra which was part of the Republic Of Yemen has been seized by rebel forces which support the reestablishment of the Democratic Republic Of Yemen (previously The People’s Republic Of South Yemen which was granted independence by The United Kingdom on 30 November 1967, being made up as it was of the former British colony of Aden along with the former states of the Federation Of South Arabia).
Socotra had been part of the Mahra State of Qishn and Socotra. From 880AD the island had been ruled by Ethiopians and had a Christian population and Marco Polo who did not actually visit the island, noted that its inhabitants were Christian but had no allegiance to the Pope but to an archbishop in Baghdad. In 1507 a Portuguese fleet under the command of Tristan Da Cunha (where have I heard that name before?) captured the port of Suq, then the capital, but abandoned the island after only four years because of the infertility of its soil and the lack of a proper harbour.
In 1511 the island passed into the hands of the Mahra sultans and the inhabitants were Islamicised. In 1834 the British East India Company attempted to buy Socotra from the Mahra sultan in order to establish a garrison there but he turned the offer down and the British left the island in 1835. The British captured Aden in 1839 which met their needs for a coaling station on the Suez-Bombay route and they subsequently lost all interest in Socotra. In 1876 the Mahra sultan came to terms with the British in exchange for a large payment and annual subsidy so that he pledged, “himself, his heirs and successors, never to sell, cede, to mortgage or otherwise give for occupation, save to the British government, the Island of Socotra or any of its dependencies”. In April 1886 the British, increasingly worried about German naval activity in the Indian Ocean and Red Sea, agreed a Protectorate treaty with the Mahra sultan whereby he promised to “refrain from entering into any correspondence, agreement or treaty with any foreign nation or power, except with the knowledge and sanction of the British government”. Hence The Mahra State, including Socotra, became a Protectorate of the British Empire and was to finally make an albeit ephemeral appearance in its own right in the Stanley Gibbons Part 1 Stamp Catalogue approximately 80 years later in the mid-1960s.
The Mahra Sultanate was abolished in October 1967 and Socotra was subsequently incorporated in the People’s Republic Of South Yemen.  Naval facilities were provided on Socotra to the Soviet Navy for a period.
The two Yemen Republics (north and south) were unified on 22 May 1990 but after the Arab Spring in 2011 President Ali Abdullah Saleh was forced to resign and was replaced by Abdrabbuh Mansur Hadi in February 2012. In the time before Saleh’s overthrow, the united Yemeni state had expressed an interest in joining The Commonwealth but general disorder increased in the country and some factions from the former South Yemen increasingly promoted the reestablishment of the South Yemen republic. In September 2014 a faction called the Houthis, backed by Iran,  seized the capital of the unified state, Sa’na, with the support of Ali Abdullah Saleh and President Hadi fled to Aden. Yemen became engulfed in a devastating civil war. Saleh was shot dead by a sniper in December 2017 and Saudi-Arabian and other Gulf states forces became involved in the fighting.
One group calling itself the Southern Transitional Council (STC) announced on 20 June 2020 that it had taken over control of Socotra by deposing the local governor, driving out the Saudi-backed government forces and seizing the government’s facilities and military bases on the island. The deposed Governor, Ramzi Mahroos, accused the Saudis and Emirates of turning a blind eye to the seizure of Socotra and indeed previously United Arab Emirates had supported STC forces with air strikes in their fighting against government forces.
In conclusion, saifbeg raises the question in his comment on Stamp Boards of whether the STC will use its seizure of the islands as a basIs for establishing a new version of the South Yemen Republic and expects that the result may be the issue of postage stamps (dependant, one presumes, on there being a functioning postal service on Socotra) in a few months time or some time next year. It’s an interesting suggestion and we will see what developments occur amid the horrific present chaos that is Yemen. I shall be very interested to see if saifbeg’s suggestions that the reestablishment of a state with formerly strong Commonwealth links do indeed become a reality and if a former philatelic entity once more finds its place in the Stamp catalogues.


🇮🇳 According to comments on Stamp boards, India Post will return to new stamp issuing in the very near future with the release of 12 stamps (6 se-tenant pairs) on the subject of Musical instruments of travelling musicians. It is suggested that the date of issue will be 25 June 2020. It is difficult to believe that there will not be an accompanying miniature sheet containing all 12 stamps. Rating:- ***. 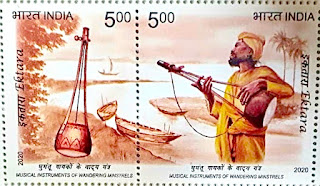 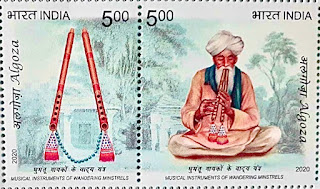 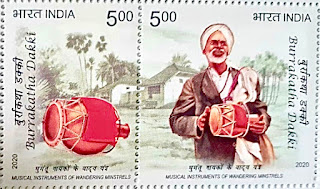 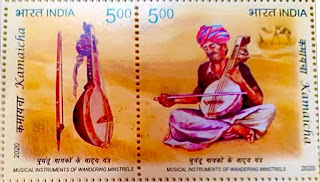 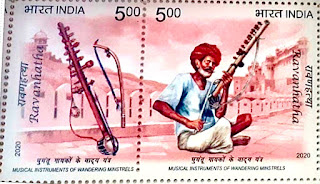 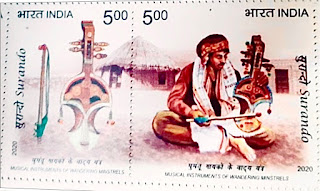 🇬🇾 IGPC has previously mentioned an issue it put out with the name of Guyana printed on it to commemorate the Chines New Year, Year of the Rat. The stated date of issue is 24 March 2020 which is somewhat after the event. An illustration of the single stamp miniature sheet, but not the 4 stamp miniature sheet, is available:- 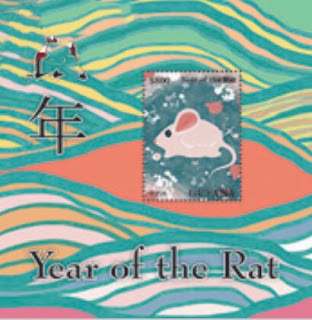 🇧🇼 Botswana Post issued a miniature sheet containing all 4 stamps as part of its African Scops Owl issue which I mentioned in Blog 1684 and which was released on 5 June 2020. 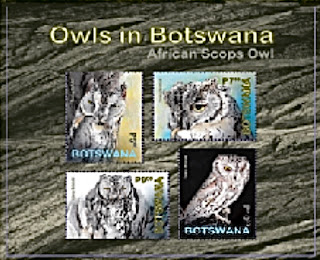