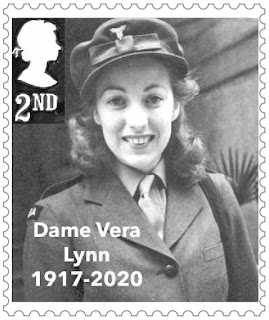 🇬🇧 The news of the death of Dame Vera Lynn, one of Britain’s greatest National Treasures, at the age of 103 comes as a blow to national morale as many in Britain grow increasingly weighed down by the COVID-19 crisis.
The singer who did as much to keep up the spirits of ordinary British people during the Second World War as did Winston Churchill himself while Nazi bombs rained down on them and food shortages and rationing affected them, died today - 18 June 2020. The public had become aware once more of her stature as a national symbol during the present pandemic as her wartime anthem, “We’ll Meet Again” was sung again at Captain Tom’s 100th birthday celebration and The Queen herself  used the words during her most recent address to the country and The Commonwealth. I suspect the population might be affected almost as much by the loss of this icon as it was when Diana Princess Of Wales was killed in a motor accident in 1997.
Royal Mail tragically is usually incapable of reacting to important events as they happen here in The United Kingdom by issuing new stamps but here is a chance for once for it to capture the national mood and decide to issue rapidly a set to commemorate the life of this remarkable woman who for decades has been part of the soul of the nation and who was partly responsible for giving it the will to survive and fight on when all looked lost. If ever such a role was relevant today then the one she played in the past is it.
So let’s see Royal Mail gird up its loins, catch the National spirit and make speed to issue a Vera Lynn set of stamps and not fob us off this time with painting a postbox somewhere or the other. I believe the British Public would appreciate such an issue especially if for once Royal Mail could think of its target audience - the ordinary British mail sender - and issue a modest set of four 2nd Class rate so that everyone can get the opportunity to use them. I bet The Queen would give her approval for such an issue quickly enough.
And just to prove that a set could be designed as quickly as necessary here’s a set of four prepared on my iPad in well under half an hour. Just think what a professional designer could produce in an hour or two. 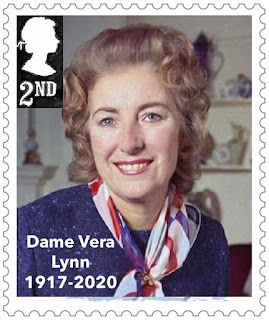 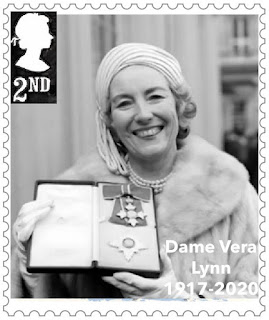 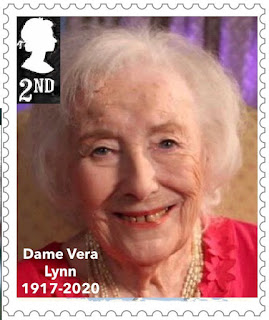