1682. 🇬🇧 What Lies Over The Horizon? Post Office Posters From The Postal Museum.

🇬🇧 The COVID-19 nightmare and its effects on society and public services have emphasised to me at least just how much the need for postage stamps is changing. As I sit at home for most of the day I find myself sending for more and more goods via internet sites and therefore my growing experience of the postman’s vaguely daily visit is not so much that of receiving letters (who needs to communicate by written mail when you can have virtual instant face to face conversations with almost everyone using Zoom?) but more of him (and my regular postmen are male) knocking on the door with a parcel to deliver. And the payment of the fee for carriage and delivery of these parcels is mostly not indicated by any conventional postage stamps plastered on the front on these parcels but by the unlovely but completely practical Horizon labels which really are just a modern form of postage stamp with bespoke variable values (they are gummed (or self-adhesive to be accurate) pieces of paper affixed to the item to be delivered by the postal services which indicate the prepayment of the item’s carriage and delivery fee).
I have a little section in my ‘Great Britain’ collection for displaying some of the Horizon labels/stamps I have received on mail over recent years and it’s really quite interesting and in reality much more relevant to illustrating the sticky bits of paper actually used on mail in Britain in 2020 than any of the expensive ‘special stamps’ depicting American comics characters and science fiction television programmes which Royal Mail continue to pour out. What I don’t really understand is why the Royal Mail hasn’t caught on to the idea of having more interesting designs for the Horizon labels/stamps illustrating, perhaps, British wildlife or commemorating Moments in British History on them. That would make collectors of British Stamps sit up and take more notice.
In the last few days I have received the following examples attached to various packages and parcels. Notably I have not received any mail sent from a non-philatelic source for well over a year, possibly even two or three years, with any Royal Mail Collectable stamps attached to it:-


Which begs the question of what is the point of collecting stamps which are rarely used or even available to be used on ordinary mail? - many small local post offices are not allowed by the Post Office to stock new ‘special’ stamps and some larger post offices are allowed to stock only some values from the large sets of 10 stamps of which so many Royal Mail special sets are made up. As for miniature sheets, Prestige booklets and Collectors sheets, they are just a nonsense now mostly obtainable only from what we used to call the Philatelic Bureau.
I won’t answer these questions. But it is hard sometimes not to think that the purchase of new stamp issues, particularly ‘special issues’, is a gross waste of money.
I returned to these thoughts after receiving an email from The Postal Museum which included a reminder of some of the items it has for sale. I particularly like the large series of historic GPO and Post Office posters and photographs which it offers for sale as reprints on demand. Of course they’re not as exciting as the original posters themselves about which I know virtually nothing but which I suppose to be very rare but many of the items are extraordinarily interesting and some by notable artists and commercial designers. It’s well worth taking a look at The Postal Museum shop’s internet site to view these items spanning many decades and if tempted to purchase one of them. The buyer can be satisfied to know that they are buying an item to support the museum and which tells the buyer more about the British postal service than a ‘Deluxe’ limited edition Prestige booklet commemorating an ephemeral piece of trendy contemporary culture and sold at an excruciatingly inflated price ever will. And they will also have an attractive item to decorate their home.
These posters and photographs would make a wonderful subject for a set of ‘special’ stamps for Royal Mail to issue as part of telling its and the Post Office’s own stories and as publicity for the Postal Museum as well as depicting British commercial art, some of which is fantastically good, of the past century.
Here are some of my favourites:- 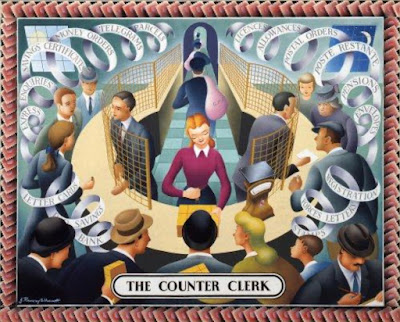 ‘The King’s Messenger AD 1481’ and ‘The Postman AD 1935’ by John Armstrong, 1 of a series of posters produced for schools showing the development of postal services through the ages - 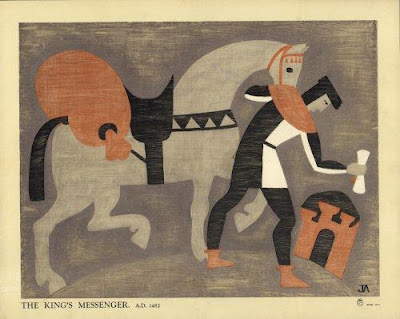 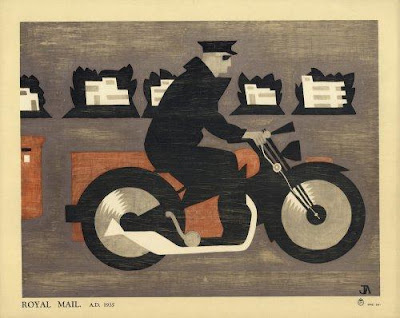 Cover of The Post Office Magazine, May 1939. The subject seems to be socially distancing, 1939 style or else it’s a twist on Romeo and Juliet. 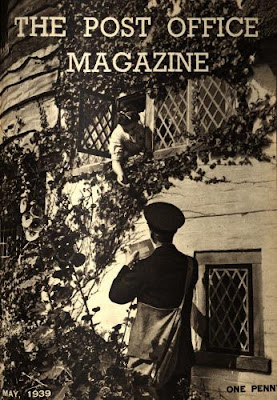 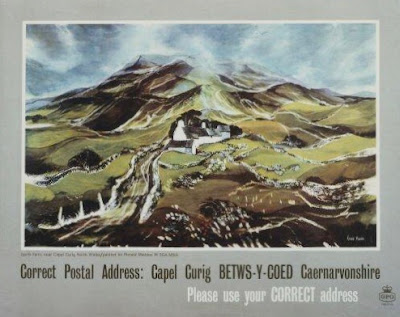 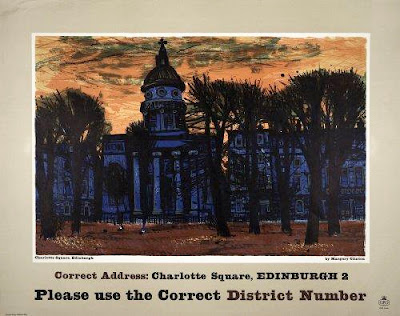 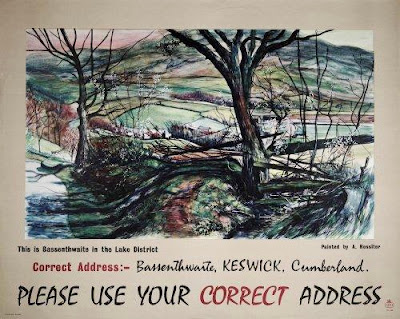 Untitled by Vanessa Bell. No date stated but this is very nostalgic for me as it reminds me of when I was a small boy in the 1950s and being taken by grandmother to our local small post office and all the older local people standing at the counter gossiping and the whole process taking an inordinately long time - 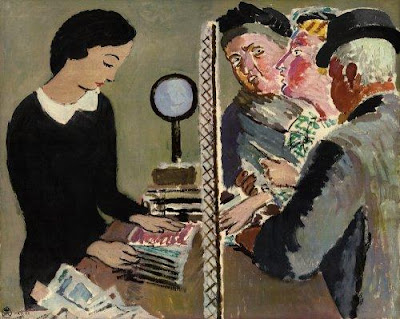 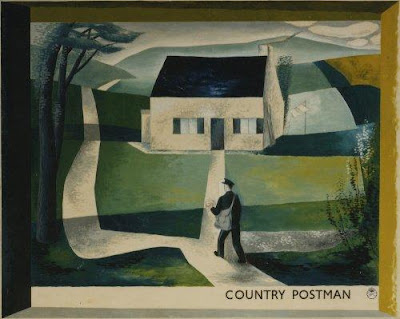 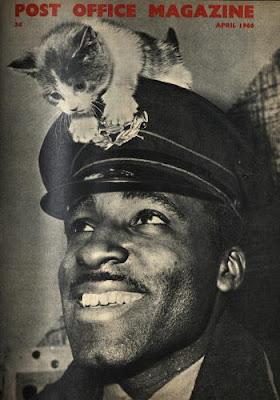 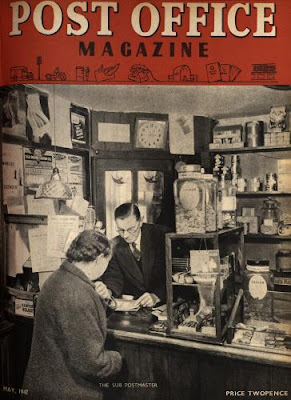 Artwork for poster, date not stated but looks very like the 1930s - 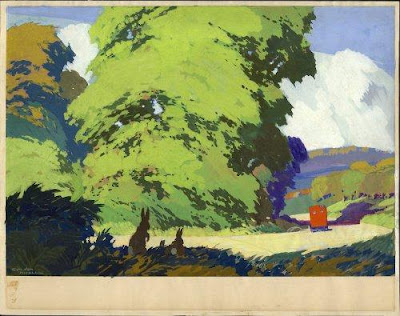 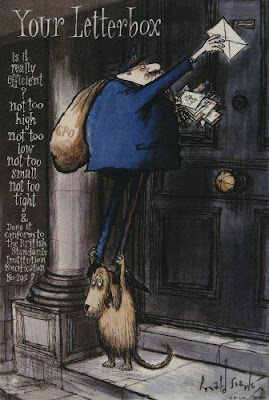 A quick scrutiny of E Bay suggests that some of the original posters are sought after if some the asking prices are anything to go by. Thus Anthony Rossiter’s Bassenthwaite poster is currently offered for sale at £220 and John Armstrong’s Postman 1935 is on sale for a remarkable US$2150! Clearly original posters are not a collecting area to casually dabble in without having a good deal of knowledge on the subject before doing so 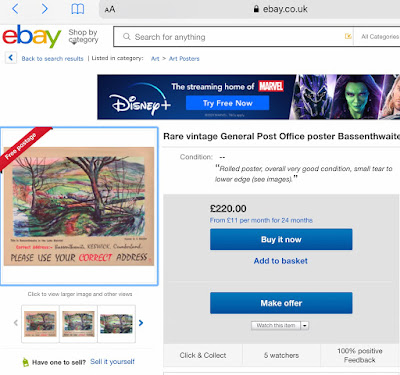 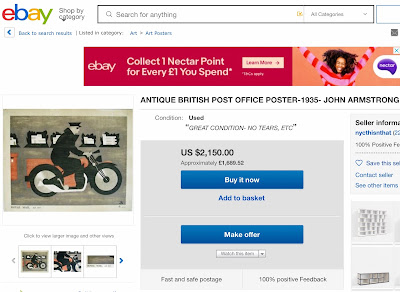 This is a response to Norvic’s comment below which is very interesting. Unfortunately I can’t get Blogger to accept my own reply comments so this is my only way of responding. If anyone does leave a comment anytime, I thank them in advance for taking the trouble. Comments are always appreciated as they are usually interesting and it’s pleasing to know that someone reads the Blog. Please forgive me if I do not always make a reply.

Thank you Ian for your comment. I have corrected the sentence about branding of Horizon labels and thank you for pointing it out. I quite agree with you about the attraction of commemorative Post and Go stamps. Up until the recent virus problem I regularly visited the kiosk in the Shakespeare Birthplace Trust gift shop at Stratford upon Avon. It was a forlorn site. Recently out of action a lot of the time and generally unnoticed by the hoards of tourists in the shop. In the whole time since it has been installed I have never been there when someone else has been using it apart from its first day of operation when a couple of collectors or dealers were obtaining stamps. To be honest if you didn’t already know that it dispensed stamps it would have been hard to work out what it was doing in there.
The stamps dispensed there really had nothing to do with Shakespeare although occasionally additional inscriptions were applied but rather randomly. There were never any special inscriptions for Shakespeare’s birthday week available for use by the thousands of potential postcard senders in the town at those times.
For the past 6 years or so the Royal Shakespeare Theatre has been working its way through the entire canon and some clever fellow might have come up with the idea of dispensing a new Shakespeare Birthplace Post and Go issue to coincide with the opening of each new play (which have ranged from marvellous productions of Love’s Labour’s Lost, Much Ado About Nothing, Titus Andronicus, Twelfth Night and The Tempest to the incredibly dire Romeo and Juliet and Taming of the Shrew). Apparently the RSC and the Birthplace Trust do not get along with each other otherwise we could have Post and Go stamps featuring actors and scenes from great productions at the theatre (I suppose featuring deceased great performers would not pose a problem). Scenes from around the town, portraits of Shakespeare’s contemporaries, Elizabethan England are all subjects which could have been used to increase the interest of a mail-sending public but all we get are the heraldic flowers designs interminably. The town, at normal times, and with it the gift shop is bursting with tourists from home and away. What a wasted opportunity.