🇬🇭 In the new edition of Gibbons Stamp Monthly (January 2020) the editor of the Stanley Gibbons Catalogue raises a question about a pair of stamps from Ghana featuring the US boxer Muhammad Ali (see below). The stamps are used on a commercial cover from Ghana dated 7 August 2017 and the editor confesses that the stamps are unknown to him. My Commonwealth new issue note books used for this Blog reveal that the question is easily answered - the stamps are part of a 4 stamp miniature sheet issued on 30 October 2012.
For several years the Ghana postal service had been issuing its own stamps printed locally but unfortunately the printers failed financially and the postal service consequently resumed allowing the notorious New York-based philatelic agency, IGPC, to issue stamps on its behalf and this issue was one of 13 sets with Ghana’s name printed on them to pour out of the New York agency after 9 July 2012 during that year.
There - mystery solved. I hope the Catalogue editor reads this. 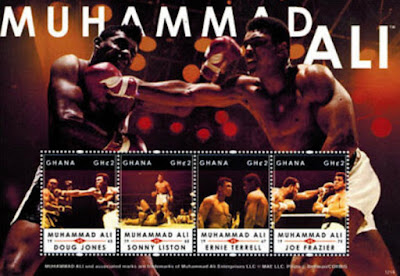 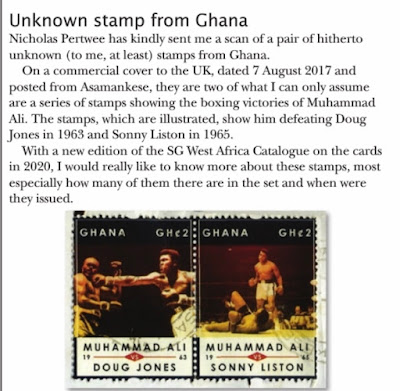 🇮🇳 India Post issued a single stamp on 14 December 2019 commemorating the ‘Force Multiplier’ which I believe is the Indian Armed Forces Veterinary Service (certainly the design would bear that out). The issue was lithographed by Security Printing Press, Hyderabad. A grand little stamp for animal lovers. Rating:- ****. 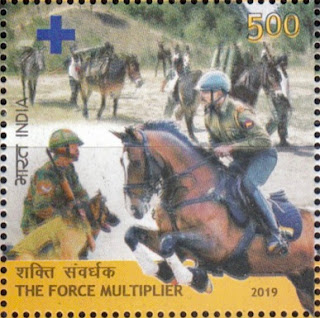