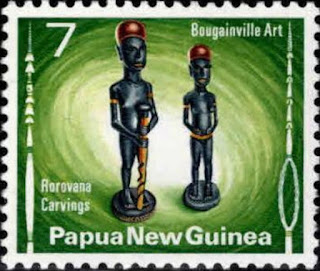 🇵🇬Collectors may find that there will soon be a new Commonwealth philatelic entity to collect after 98% of the 181067 voters in the referendum held in Bougainville, an autonomous island group which is presently part of Papua New Guinea, voted for full Independence (see Blog 1550). The referendum was not binding but talks will now take place on the next steps to take to achieve the goal which the vast majority of Bougainville voters have chosen.
Bougainville would be a small country in size, a little larger than Cyprus in area with a population slightly smaller than that of Vanuatu and slightly larger than that of Barbados.
In recent years philatelists have found that collecting the stamps of new, moderately poor countries to be problematical since, when such stamps are issued, they are not easily obtainable from postal services which do not have a well developed philatelic service or a reliable overseas philatelic agent and there is always the risk that a predatory agency such as Stamperija or IGPC might persuade the new nation’s postal authority to sign contracts with it which results in the release of abusive issues, such as we are all familiar with.
The Papua New Guinea government may choose to ignore the expressed wish of the voters of Bougainville just as the ruling elite in Britain has done its best to ignore the expressed choice of British voters on the issue of the country’s departure from the European Union but when as many as 98% of voters have opted for Independence then it will be very difficult for the Papua New Guinea government to ignore such an overwhelming majority.
And so, prepare to add the name of Bougainville to your stamp album.

🇯🇪 Jersey Post has announced that its new issue programme for the first half of 2020 will be:-

3 January 2020 - Chinese New Year, Year of the Rat - 1 Stamp and 1 miniature sheet (see Blog 1556)
12 February 2020 - Jersey artists, Claude Cahun (actually a French female photographer who eventually came to live in Jersey. This issue does not appear to be tied to any particular anniversary but gives Jersey Post the opportunity to demonstrate its awareness of and sensitivity to gender issues that are so important in present society)
26 March 2020 - 250th Birth anniversary of Ludwig Van Beethoven (German music composer with no links to Jersey)
7 April 2020 - Europa, Ancient mail routes - Mail ships
9 May 2020 - 75th anniversary of the Liberation from Nazi occupation
9 June 2029 -  150th anniversary of the death of Charles Dickens (English writer)

🇧🇩 Bangladesh Post issued a single stamp on 27 July 2019 to commemorate the holding of Bangladesh 2019. The issue is a previously issued stamp with an overprint applied in gold. Rating:- **. 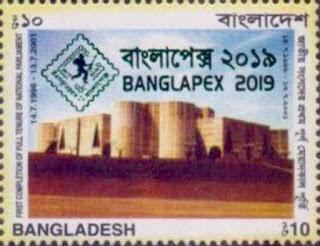 🇳🇬 The miniature sheet issued by Nipost, the postal service of Nigeria, was sold in 2 forms - the imperforate type featured in Blog 1534 and a considerably rarer perforated type which is depicted below. The date of issue was 2 October 2019. Ratings:- *****. 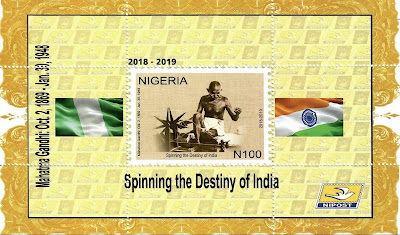 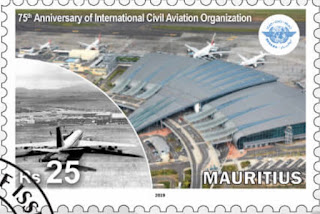