1357. 🇬🇧 Royal Mail Will Not Commemorate US Invasion Of Dutch East Indies.

🇬🇧 It didn't take long for Royal Mail's newly announced 2019 new issue programme to get into trouble. Nor did it take long for someone to recognise that the stamp used as a centre piece of Royal Mail's 2019 programme publicity did not show British troops taking part in the D Day landings but instead showed American troops landing in the Dutch East Indies. Oops! Naturally Royal Mail is embarrassed and this particular stamp will not after all be released during 2019.
This is the problem with issuing too many stamps. It's to be expected that quality of design and research carried out into choosing pictures for designs is bound to become slipshod. But I'm pleased to confirm that rumours are not true that an American bald eagle is lined up to appear on the proposed Birds of Prey set instead of an illustration of a sparrowhawk which Royal Mail had intended to feature.

🇮🇪 I have not yet seen a detailed new issue programme from An Post, the postal service of Ireland, but have seen a report that states that the following subjects will be featured in its 2019 collection of releases:-
the Irish Coastguard,
Centenary of the first meeting of the Dáil
Birth centenary of the novelist Iris Murdoch
Centenary of the first trans-Atlantic flight
50th anniversary of the first manned lunar landing
Irish organ donation
Rugby World Cup.
🇵🇰 Pakistan Post issued a single stamp on 24 December 2018 to commemorate the 25th anniversary of the founding of the Ghulam Ishaq Khan Institute of Engineering Sciences and Technology. A rather design by Adil Salahuddin featuring a building and nothing else. Rating:- *. The stamp was lithographed by the National Security Printing Company in Karachi and perforated 13. 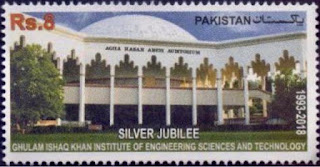 Another issue was released by Pakistan Post on 26 December 2018 to commemorate the 50th anniversary of Crescent Model Higher Secondary School in Lahore. This single stamp again depicts a building and nothing else. Rating:- * 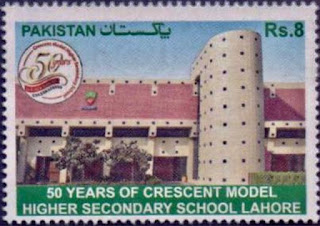