🇦🇺 According to my arithmetic Australia Post has so far issued 321 stamp items (stamps, miniature sheets, sheetlets, prestige booklets, items with the names of territories printed on them et al.) during 2018. But, it seems, those who are charged with screwing money out of collectors are not satisfied with that dubious achievement. The brilliant brains that plan Australia Post's offerings to stamp collectors have now come up with a new range of products which are to be called 'sticker stamps'.
Rather like the products of the notorious Stamperija these are designed to appeal to the thematic market and will feature various subjects, many of which have no relevance to Australia, such as television programmes like The Simpsons or films such as Disney/Pixar productions or Star Wars (c.f. the products of the also notorious IGPC) all reflective of United States culture. I know there's an old joke which goes, "What's the difference between Australia and yogurt?", answer:- "Yogurt has a culture" but really if I were Australian I would be infuriated to see my national postal service behaving as though it served a United States colony. I can only suppose that Australia Post sees Australia as a United States cultural colony. Perhaps Australia Post is considering contracting out its new issue production to IGPC in the future.
It is planned that these sticker stamps will all be self-adhesive with no gummed versions (which is a good thing I admit) and some of them will be unconventional shapes such as the example depicted below where the stamp takes the shape of 2 football jerseys.
At the moment the plans for this new range of issues are out to consultation but we all know that no matter what the stamp-collecting public says, once some bright spark has come up with an idea like this there will be no stopping it. So is Australia Post aiming to release 500 new stamp items in 2019 placing it squarely among the serried ranks of the Stamperija clients? 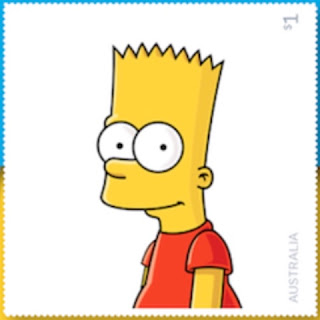 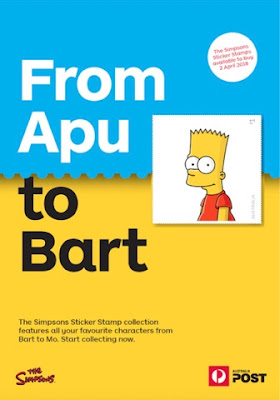 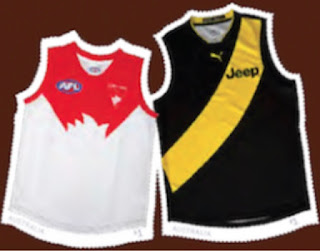 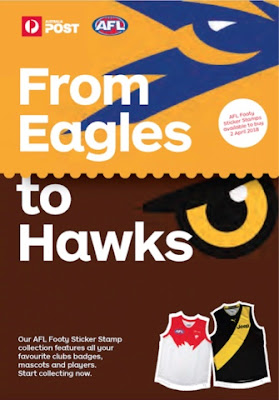 🇫🇰 The Falkland Islands postal service will issue a set of 4 stamps on 19 December 2018 to commemorate the 70th anniversary of the Falkland Islands Government Air Service (FIGAS). The stamps were designed by Bee Design and lithographed by Cartor and perforated 13.5. This is an interesting and attractive set but I'm not sure that a 70th anniversary is a fully justifiable commemoration. Rating:- ****. 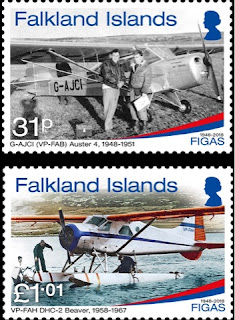 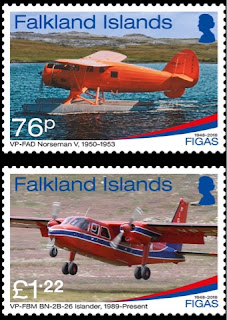