🇳🇺 The postal service of Niue issued a set of 4 stamps and 1 miniature sheet on 19 October 2018 to commemorate the opening of the new Taoga Niue Museum which replaces the previous island's museum destroyed by Cyclone Heta in 2004. The designs feature various items displayed in the new museum. The exhibits shown on the stamps were photographed by Huga Toke Talagi. The stamps were designed by Saint Andrew Matautia and lithographed by the Collectables and Solutions Centre in Whanganui and perforated 13.5. Rating:- ****. 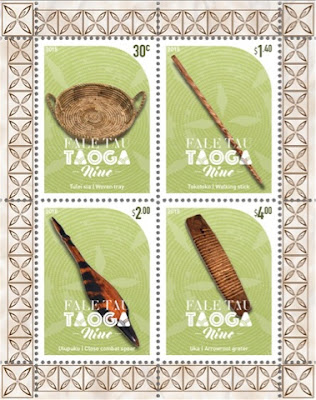 🇲🇹 MaltaPost has issued 2 stamps with special attached labels to mark its attendance at philatelic exhibitions recently.
Firstly a stamp plus label was issued on 7 September 2018 for the exhibition held in Prague and then a similar item was released on 23 October 2018 in relation to Maltex 2018.

🇨🇦 Canada Post has indicated that its 2019 new issue programme will include stamps which take the form of a new definitive featuring Queen Elizabeth II, more items in the 'Far and Wide' series and a 'Year of The Pig' issue. These will be followed in February by another stamp in its 'Black History' series which will depict Albert Jackson, Canada's first black letter carrier. There will be an issue in the Flowers series, this time depicting Gardenias and then an issue dealing with the Vancouver Asahi baseball team.
There will be an issue depicting Canadian bears and an issue dealing with the role of Canadians in the development of aviation. An issue will commemorate the Red River rebellion, another will commemorate the founding of Manitoba and a third will depict historic covered bridges.
There will be the usual charity stamp supporting the Canada Post Community Foundation and then the annual Christmas issue.
🇲🇼 Below I now depict all 6 single stamp miniature sheets mentioned in Blog 1316 and issued on 5
October 2018 on the subject of Translocation of elephants. 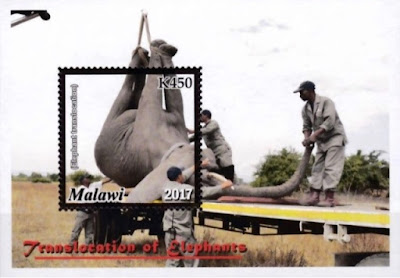 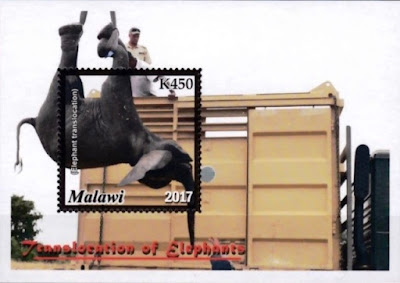 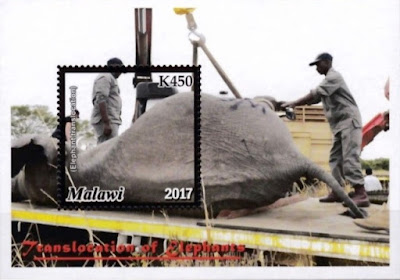 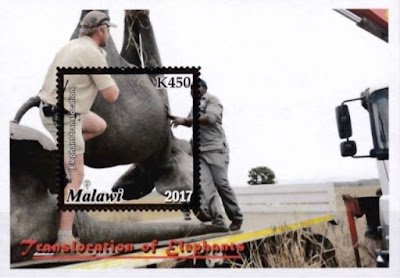 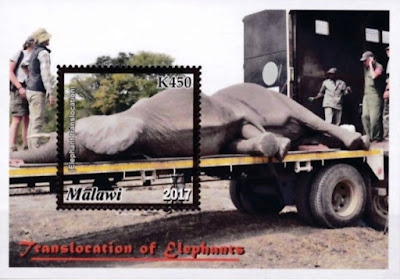 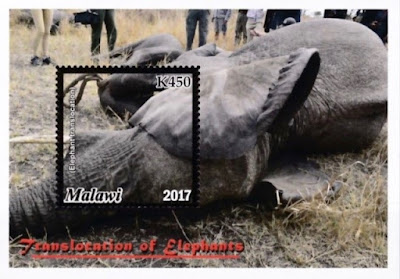 🇮🇲 This year's Christmas stamps from the Isle Of Man Post Office take the form of 8 gummed stamps, a very large sheet containing all 8 stamps and 8 self-adhesive stamps with the same designs but dispensed from an automatic dispenser. The theme of the issue is tied to the 80th anniversary of the Beano comic and the designs are so contrived as to depict two characters from the comic, Dennis the Menace and his faithful hound Gnasher, enjoying adventures against the backgrounds of different Manx scenes.
The sheetlet, if that's an appropriate term, takes the form of two pages of the Beano comic and tells a story for the purchaser to enjoy after Christmas lunch whilst they're waiting for The Queen's Christmas speech to start on the television. The issue was designed by EJC Design from art by Nigel Parkinson and lithographed by Lowe Martin and perforated 13. The issue will be released on 29 October 2018.
I ought to be more pleased with this issue because it's very hard for postal administrations to constantly come up with original subjects for stamp issues especially Christmas issues but it all seems somewhat contrived and a little tiresome. Rating:- ***. 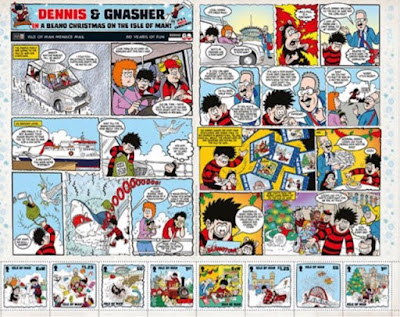 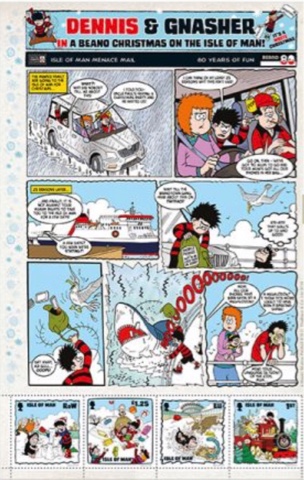 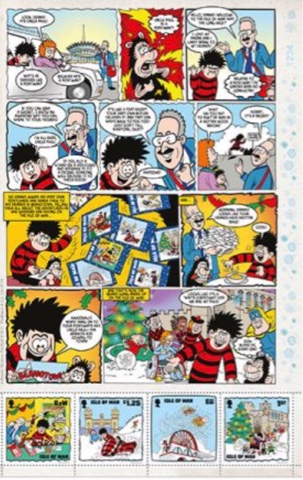 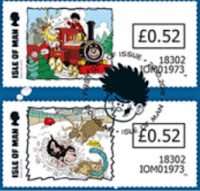 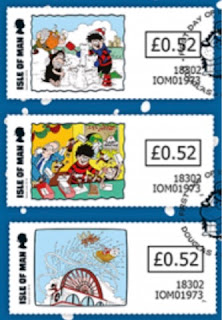 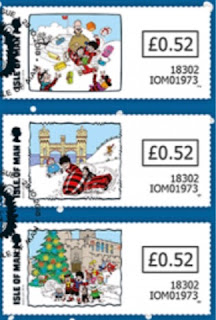 🇸🇨 Seychelles Post has announced that it will issue a stamp during 2019 to commemorate the 150th Birth anniversary of Mahatma Gandhi. There is no news, as far as I know, of any new issue being released during 2018.

🇯🇪 Jersey Post will issue more Post and Go stamps on 23 November 2018 to coincide with the Fête de Noué which heralds the start of the Christmas season in Jersey. Kiosk JE02 will dispense the Jersey Crest stamps with an additional inscription Complyîments d'la saîson and the Jersey Flag stamp with the inscription Season's Greetings. Both types of stamps will also have an icon representing a sprig of holly. These items will be dispensed until 3 January 2019. Rating:- 0.

Last week I visited the Shakespeare Birthplace Trust gift shop in Stratford upon Avon, which I do frequently, and found that Post and Go kiosk A009 was dispensing the Machin Head stamp with the Trust's additional inscription and with code MA14 which I have not previously seen being dispensed. Previously the stamp has been issued with no code and code MA15 (both used on the first day of the kiosk's activity, 1 November 2018) and code MA13 which dates back to March 2017 I believe. Rating:- ***.