🇸🇭 The postal service of Tristan Da Cunha will issue a set of 4 stamps on 18 October 2018 as part of the Pobjoy Stamps/Creative Direction mini-omnibus series featuring various migratory species. The featured species are the Great shearwater and the Atlantic yellow-nosed albatross. The issue was designed by Andrew Robinson from photographs taken by Andy Schofield and lithographed by Cartor and perforated 13.5. Rating:- *****. 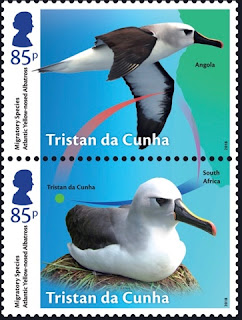 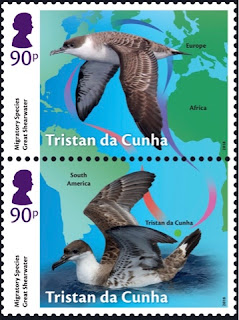 🇯🇪 In Blog 1295 I mentioned that Jersey Post was to be represented at the Macao 2018 35th Asian International Stamp Exhibition and would be selling Jersey Flag Post and Go stamps with an appropriate inscription, 'MACAO/2018' as depicted below:-

🇹🇷 The postal service of the Turkish Republic Of Northern Cyprus issued a single stamp on 25 September 2018 on the subject of Occupational health. The stamp was designed by GK Sonmezer and lithographed by Bolan Dijital Baski Ltd. All in a good cause I suppose. Rating:- ***. 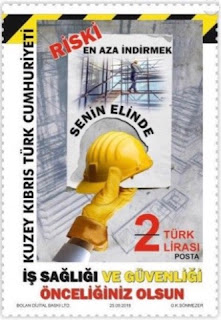 🇮🇲 The Isle Of Man Post Office will issue a set of 4 stamps on 18 October 2018 to commemorate the Bicentenary of Point of Ayre and Calf Of Man lighthouses. The issue was designed by Isle Of Man Advertising and Charles Guard from photographs taken by Duke Aerial Productions and lithographed by Cartor and perforated 14. Rating:- ***. 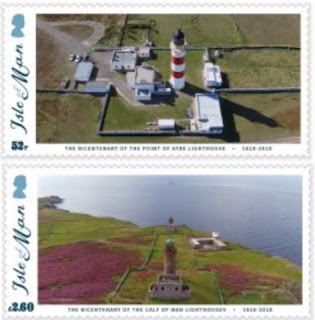 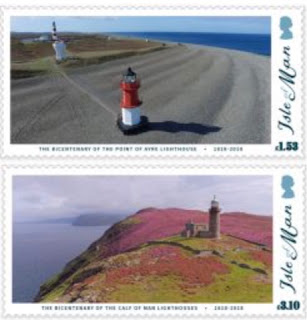