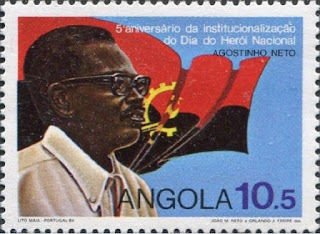 🇦🇴 From time to time over recent years it has been reported that various countries are considering or actually want to join The Commonwealth. South Sudan has been in negotiations since it became independent in 2011 but a vicious civil war has raged there for several years, though a ceasefire was agreed recently between the warring groups, which has stalled the admission of the country to the organisation. Who can say whether or not South Sudan will eventually become a Commonwealth member.
Then there is Zimbabwe which left The Commonwealth in 2003 while the tyrant Robert Mugabe was in power but with his overthrow and the successful holding of elections in the country recently the new Zimbabwe government has opened negotiations for it reentry to The Commonwealth.
Other countries, at various times, are said to have expressed an interest in becoming members of The  Commonwealth - Surinam, Burundi, Gabon (see Blog 195), Timor Leste (see Blog 275), Sudan, Yemen, Algeria, Madagascar (Blog of 29 January 2012) and, as happens from time to time, journalists and commentators write about the possible return of The Republic Of Ireland to Commonwealth membership to ease relations as The United Kingdom leaves The European Union. Well, I suppose anything is possible.
Now we have news of another country with no previous constitutional links with Britain or the other historic members of its empire which is said to be interested in becoming a Commonwealth member - Angola, a former colony of Portugal as was Mozambique which joined The Commonwealth in 1995 as a 'special case'. Reports in various papers and other news sites in June 2018 claimed that the then British Foreign Secretary, the notorious Boris Johnson, had 'tweeted' the following, "Splendid that Angola wants to join the Commonwealth family. Very much welcome President Lourenço's commitment to long-term reform, tackling corruption and improving human rights ...".
Of course it's quite reasonable to say that anything uttered by Mr Johnson has to be taken with a large pinch of salt but subsequently a television interview given by the Angolan president revealed that Mr Lourenço had indeed expressed his desire for his country to join the organisation. The reason for the interest in joining The Commonwealth seems to be linked to Angola's geographical situation whereby most of its neighbours are Anglophone countries.
As regards adding any stamps issued after Angola were to become a Commonwealth member to my collection there would be little bother as Angola has a pleasing, relatively conservative new issue programme with stamps featuring subjects of relevance to it which are usually well designed and produced. This contrasts with the postal service of Mozambique which allows Stamperija to produces hundreds of philatelic items per year in its name, as is very well known
Collecting the stamps of the Commonwealth countries continues to provide many interesting facets and I suspect that the stamps of Angola could well be very stimulating to collect. 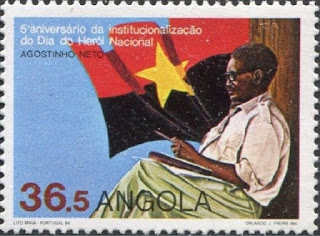 🇺🇸 In 10 months time the world will commemorate the 50th anniversary of the first manned lunar landing by Apollo 11. Never slow to cash in early on a subject is the American stamp agency IGPC which has just released or is just about to issue a miniature sheet containing 6 different stamps and a single stamp miniature sheet on that very subject and with the name of Grenada printed on them. Rating:- 0. 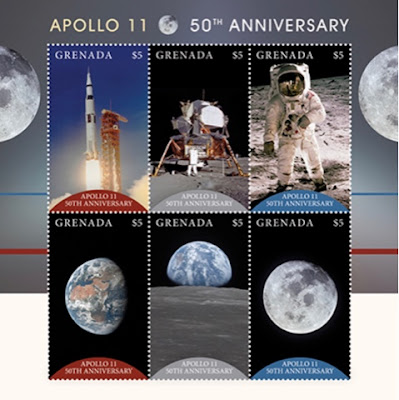 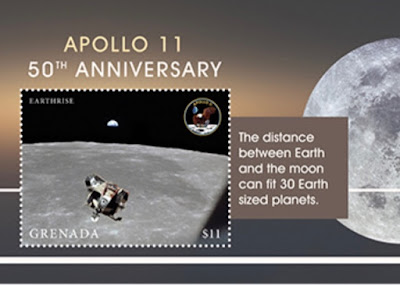 🇬🇬 Guernsey Post will issue 6 stamps on 8 November 2018 to commemorate the Centenary of the end of The First World War. The stamps were designed by Charlotte Barnes and depict various memorials. The issue was lithographed by Cartor and perforated 14 x 14.5. Apart from the importance of the subject matter there is little about this issue that makes want to buy it. Rating:- **.

Guernsey Post will also release a set of 7 self-adhesive Christmas stamps featuring Ernst Hoffman's novella The Nutcracker and the Mouse King on 8 November 2018. The issue was designed by Andrew Robinson and lithographed by Southern Colour Print with simulated perforations. Illustrations are awaited.
Christmas stamps will also be issued with the inscription 'Alderney'. Again there are 7 values this time on the subject of Charles Dickens' A Christmas Carol and designs are again by Andrew Robinson  but lithographed by Lowe Martin and perforated 13. Illustrations are awaited.