1163. 🇳🇱🇬🇧 From The Postal Museum To The Cautionary Towns. 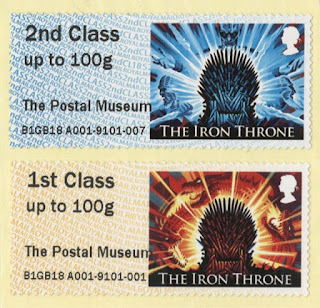 🇲🇲 The postal service of Myanmar issued 3 new stamps on 4 January 2018 to commemorate the 70th anniversary of the country's independence. This is very interesting and attractive set. Rating:- *****. 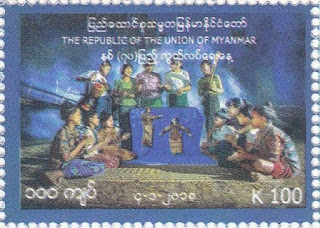 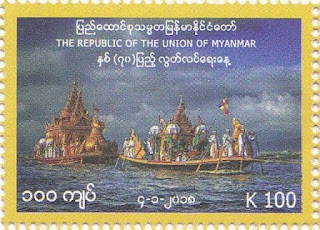 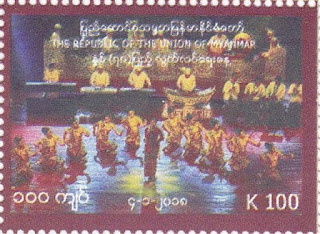 You'd think that there were enough stamps around for me to think about without inventing more. But one of my regrets about stamp collecting is that stamps are recently modern items - 1840, when Rowland Hill came up with the idea of the postage stamp and the Penny Black made its appearance, really isn't all that long ago - my great great grandfather was just 14 years old when he could have first sent a letter using the Penny  Post system.
Just imagine if postage stamps existed in 1066 - what an interesting year of new issues we would have seen. The year began with Edward The Confessor still on the throne of England so the current definitive set would have depicted the dying monarch. The year was still very young when The Confessor died and Harold II was chosen as King of England. A new definitive series would have been required which depicted the new monarch and a set would have been in preparation to commemorate the Coronation of King Harold II which had taken place on 6 January at Westminster Abbey, a day after King Edward's death. Presumably, there would have also been a special Mourning issue to mark the life of The Confessor. No doubt there would have been some 'special issues' in the pipeline if The Kinge's Maile was following the same new issue policies as the current Royal Mail. Perhaps there would have been a series depicting breeds of Hunting dogs or, to please Bird thematic collectors, a set depicting Birds of Prey used in falconry. The Kinge's Maile may have been planning a special series on the subject of the book 'Beowulf' which was intended to be the blockbuster issue of the year or perhaps there was to be a set which was to commemorate the Centenary of the birth of King Aethelred The Unraed along with the 50th anniversary of his death.
There might have been some emergency provisional surcharges when England was invaded by the Norwegian king, Harold Haadraada, in autumn 1066 and doubtless a 'Victory' overprint to commemorate the defeat of the Norwegians at the Battle of Stamford Bridge on 25 September. More provisional overprints would have been issued after King Harold's defeat and death at the Battle of Hastings by the Duke of Normandy, William The Bastard, which removed the late king's portrait from the current definitive series and a new definitive series depicting the Norman would no doubt have been rushed out in time for his coronation at Westminster Abbey on Christmas Day 1066. I suppose there would also have been a set to commemorate that Coronation. 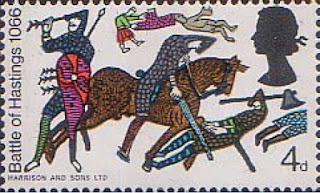 What a year of new issues that would have been. Who needs 'Game Of Thrones' when you've got the real thing in the form of English history? Of course a numismatist would say that if I collected coins rather than stamps I would be able to go much further back in history than a stamp collection would allow me to do but I've been a stamp collector for more than 50 years so there's no going back now.
Which brings me, finally, to the point of this section. As well as most enjoying stamps which tell us about a country's history, I also love collecting stamps from territories about which few people are aware.
I'm reading currently a book about the death of the Elizabethan playwright, poet and spy, Christopher Marlowe, a real bad boy who was said to have been killed in a tavern brawl in 1593, and in the book I came across a chapter where Marlowe is carrying out his espionage-related activities in a town in the Netherlands which the English called Flushing, but which is now known as Vlissingen. The book mentions that Flushing was actually an English possession at that time which is a fact of which I was not aware. Well, of course I rushed to see what Wikipedia had to say about it.
Flushing was at that time part of what are called The Cautionary Towns. These were territories which had been garrisoned by English troops from 1585 as part of Queen Elizabeth I's support for the Protestant Dutch Republic against the Catholic King Philip of Spain. As well as Flushing the territory also included Briel (now known as Brielle) and Rammekens. With the aim of keeping these towns out of Spanish hands, by the Treaty of Nonsuch, the Dutch Republic handed them over to the English to garrison at their expense and they became English territories. Robert Sidney, the first Earl of Leicester accepted the title of Governor of Flushing from the Dutch in 1588 much to the Queen's chagrin, she having previously declined the title. Thomas Cecil, the first Earl of Exeter was made Governor of Briel and he was succeeded by Edward Conway, 1st Viscount Conway who named his daughter Brilliana in honour of the town.
When the English and Spanish finally agreed to peace by the Treaty of London of 1604 the Spanish demanded the return of the Cautionary Towns but the English refused and only eventually gave up the territory in 1616 when the Dutch purchased the towns for a sum of £250,000. Thus another English, or by then British, territory disappeared into the lesser known annals of history. English ownership of the territory had lasted just over 30 years which in modern times would have given the towns' postal services plenty of time to release many, many stamps.
We could conjecture one or perhaps 2 definitive issues for the reign of Queen Elizabeth I and then one or two similar sets featuring King James I. In 1588 we might have had an issue to commemorate the defeat of the Spanish Armada, a set to mourn Elizabeth I on her death in 1603 and a set to commemorate the Coronation of King James I at Westminster Abbey on 25 July 1603. Perhaps we might have had stamps to commemorate the thwarting of the Gunpowder Plot in 1605. There might have been an issue which commemorated Elizabethan and Jacobean theatre - perhaps Shakespeare would have appeared on stamps 350 years ahead of his first actual depiction in 1964.
It's exciting to think of which subjects would have been commemorated and famous persons featured if an earlier Rowland Hill had come up with his plan for paying for a postal service several centuries before. And what of the territories which would have appeared in a British Empire and Commonwealth stamp catalogue covering that period? - we would have had such interesting names as Willoughbyland, East Florida, Minorca, Calais, Virginia, Mosquito Coast, Hanover, the list goes on ....
Here's one to add to your collection of The Cautionary Towns:- 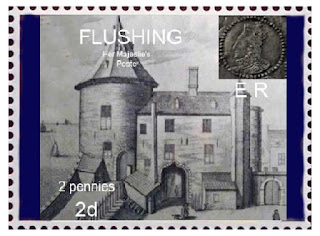 🇲🇿 Correios de Mocambique has barely issued a stamp at all, as far as is known, for several years. Since it entered into a contract with Stamperija in 2007 which allowed that philatelic agency to issue literally hundreds of 'stamps' per year Mozambique's postal service has shown no sign of taking interest in the sort of products which Stamperija has being unloading on to the philatelic market in its name. However Stamperija currently does not claim to have issued any stamps with the name of Mozambique printed on them since 10 February 2017. I wonder what happened. 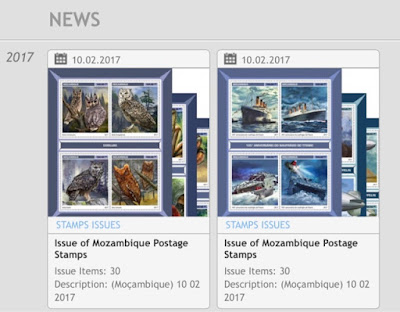