🇬🇧 British newspapers have got themselves into a tizzy about Royal Mail's decision to issue stamps which commemorate Game Of Thrones but not to commemorate the withdrawal of The United Kingdom from membership of The European Union, an action which is otherwise known as Brexit.

In Blog 1138 I covered the demands of British pro-Brexit politicians that Royal Mail should issue stamps to commemorate Brexit and how the BBC had covered the story on one of its political programmes and even presented to its viewers potential designs for 3 such stamps.
Then, as described in Blog 1156, one of the British tabloid newspapers, The Sun, railed against the issue of Game Of Thrones stamps when Royal Mail had apparently ruled out issuing any Brexit stamps. The newspaper, following in the footsteps of the BBC, put forward two possible Brexit commemorative stamp designs and these are depicted below:- 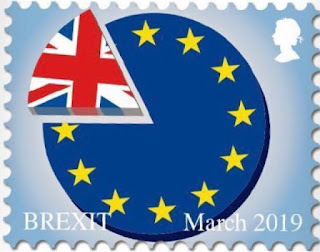 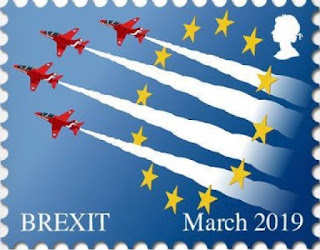 Meanwhile The Guardian newspaper which is profoundly left wing and read by the so-called metropolitan elite - middle class, socialist-leaning, Remain supporting voters who have failed to come to terms with the Referendum result of 2016 and have therefore earned themselves the sobriquet of 'Remoaners', published a counter-article which mockingly identified items that Brexiteers (supporters of British withdrawal) could buy for themselves in the absence of any Royal Mail stamps. These items included the hilarious sheetlet of 4 stamps and 1 miniature sheet issued by Stamperija for its client postal administration - that of The Central African Republic - in 2016 (see Blog 820) but erroneously described the appalling items as 'fake Brexit stamps' and said, 'They are not official and appear to be the product of a Lithuania-based outfit ....'.
We do not normally expect any degree of accuracy in stories printed in British newspapers so it is not surprising that the Guardian article contains errors - Stamperija-produced products are not 'fakes' and they are produced officially insomuch as the philatelic agency has a contract with the client postal administrations to produce these items. It is wrong to write that the items "appear to be the product of a Lithuania-based outfit ...." because they are indeed the product of a Lithuania-based outfit. Many collectors, including myself, may not like Stamperija-produced items for a number of valid reasons but the products are 'official' even though the subjects frequently have no relevance to the countries whose names appear on the items nor often appear to actually be on sale at postal counters in those countries.
Brexit stamps .... this story will run and run ....