🇬🇬 News from Guernsey Post. Another miniature sheet in the never ending 'Endangered species' series will be released on 14 February 2018 and this particular sheet depicts a Black rhinoceros. I fully sympathise with efforts made to protect these splendid but unfortunate creatures but I see no reason for Guernsey Post to continue with this series which does not depict local species. This is quite a nice portrait of the creature though in some years the finished designs are less satisfactory. I do not like this ongoing series and I will not be spending my £3 on this item. Rating:- 0. 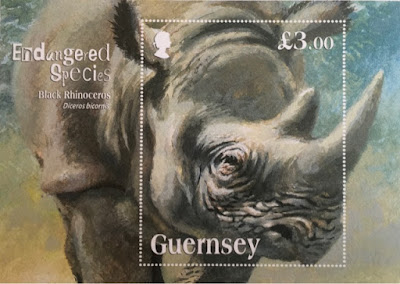 Another issue which has no relevance whatsoever to Guernsey is the Year of The Dog set and a miniature sheet accompanies this. I illustrated the basic stamps in Blog 1139 and I now depict the miniature sheet below. The planned date of issue is 3 February 2018 and again I shall not be spending any money on these items. I do wish that Guernsey Post would abandon these long term ongoing issues. Rating:- 0. 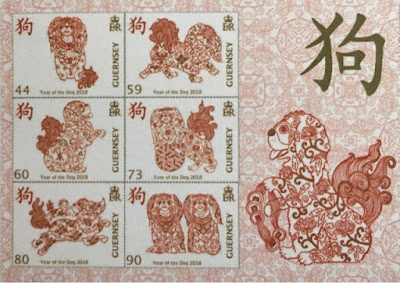 Guernsey Post will also issue a set of 6 stamps and 1 miniature sheet on 14 February 2018 with the inscription 'Alderney'. This issue commemorates the 50th anniversary of the first appearance of the characters known as the Wombles in books written by Elizabeth Beresford who was a resident of Alderney from 1967 until her death in 2010. These creatures became increasingly popular for a while with the British public when they appeared in their own animated television series and achieved a level of notoriety when musicians dressed in Womble costumes scored a popular music success with a record which included the lines, "The Wombles of Wimbledon Common are we ....".
These are cheerful enough stamps which will brighten items of mail in Alderney and they have an undoubted local relevance. The issue was designed by Mark Totty and lithographed by Southern Colour Print and perforated 13.5. Rating:- ****. 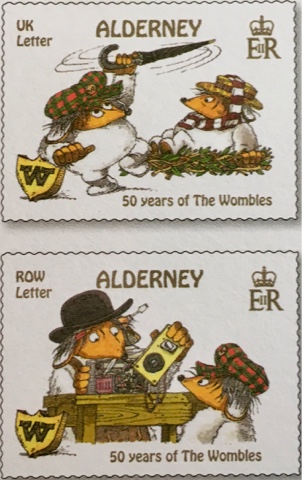 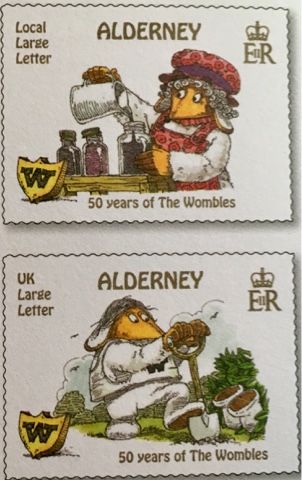 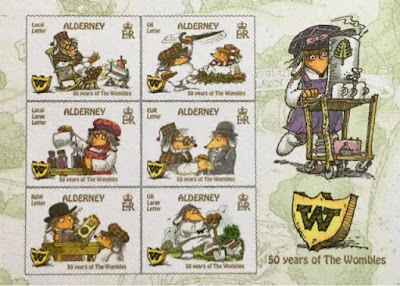 🇱🇹 In addition to the 9 miniature sheets and 9 sheetlets mentioned in Blog 1162, Stamperija issued an additional pair of such items on the subject of the The Quincentenary of the Protestant Reformation in Europe. Stamperija's website shows these as 'sold out'!
Oh, by the way, these items have the name of Sierra Leone printed on them and are stated to have been 'issued' on 30 November 2017. Rating:- 0.
By the way, the face value of this issue - SLL79200 -.is equivalent to £7.51p which doesn't sound a lot but we must remember that there are 20 such issues per month which bear the inscription 'Sierra Leone' making a total of £150 per month or £1800 per year. This grand total does not include the premium imperforate issues which are sold for more than double the regular perforate issues and then there's the so-called 'first day covers'. It's clear, isn't it?, that you only have to sell a few of these items to collectors of 'Bird' stamps, some to 'Marilyn Monroe' stamps enthusiasts, a small number to 'Cats on stamps' collectors, a few more to 'Elvis Presley stamps' collectors and so on and it's easy to understand, given the numbers produced and the face values ascribed to them that Stamperija's owner can amass a fortune at the expense of thematic or topical collectors (it's doubtful that a collector of Sierra Leone stamps is going to buy 240 sets and 240 miniature sheets in one year). Fascinating isn't it? Just think about it before you're tempted to buy one of those colourful thematic sheets looking up at you from Delcampe. 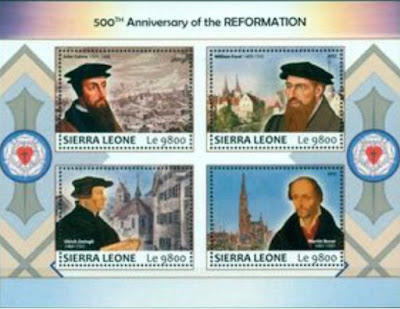 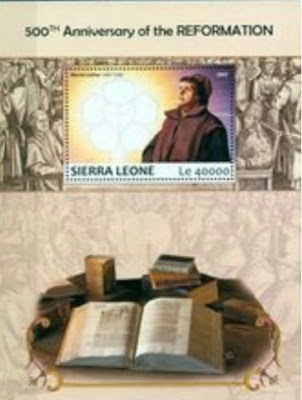