The  🇮🇲 The Isle Of Man Post Office is not holding back on its new issues at the beginning of this new year. In addition to the new issue mentioned in Blog 1122 on the subject of fashion in the Isle of Man which is due to be released on 1 February 2018 two further sets will be issued by the middle of February.
The first is titled 'Manx Tholtans' which are ruined buildings or other structures and the work of photographer Ray Kelly is featured in the designs. This is an interesting and very attractive set but there seems no reason for it to be issued and therefore I shall not be buying it as Isle Of Man Post Office is so prolific with its new stamp issues. Rating:- **.
The set was designed by EJC Design and lithographed by Cartor and perforated 14. The total face value of a set is £6.59p. The issue will be released on 5 January 2018. 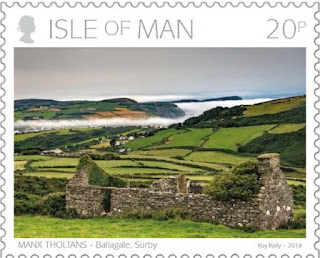 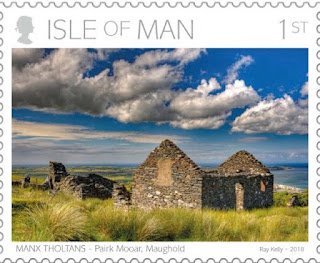 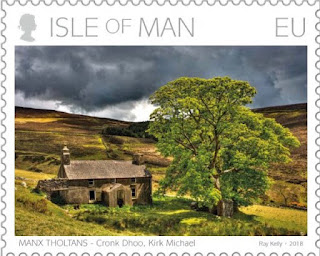 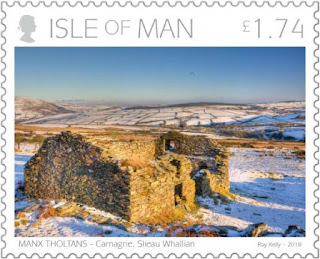 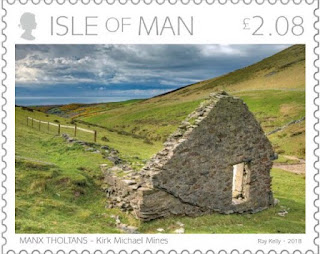 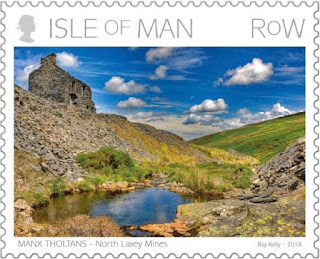 There is more to come on 14 February 2018 when a set of 6 stamps will be issued on the subject of the film adaptations of the books of Sir Thomas Hall Caine whose popularity reached its height during the Edwardian period. Not only was he an inhabitant of Isle Of Man but about half of the films were filmed in The Isle Of Man. The designs by Glazier Design depict some of the glamorous actors and actresses who appeared in the film adaptations in the roles that they played.
Again this is an interesting enough issue but there seems no reason for the release of such an issue now and so I again will not be spending my £5.52p on these stamps. Rating:- **.
The issue was designed by LM Group and perforated 13.

🇹🇿 Tanzania Post Corporation issued 2 miniature sheets on 17 December 2017 on the subject of Wildlife of Africa and featuring the art of Tjili - Tjili Grant Wetherill - a young artist with cerebral palsy who is also deaf and unable to speak. Tjili is the granddaughter of Allan Grant the owner of Rushstamps and it was he who suggested the collaboration with IGPC which presented the designs to Tanzania Post Corporation for its consideration as a stamp issue. One of the miniature sheets contains 2 stamps and the other contains 6 different stamps. Rushstamps aims to feature these items on its stand at the Spring Stampex Exhibition to be held in London in February 2018 and also some 'overprints' though whether the 'overprints' are an official Tanzania Post Corporation issue or a private overprint applied by Rushstamps is not made clear. 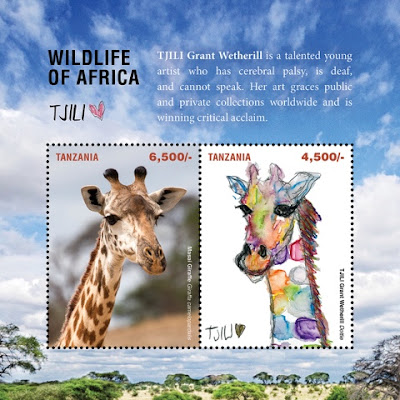 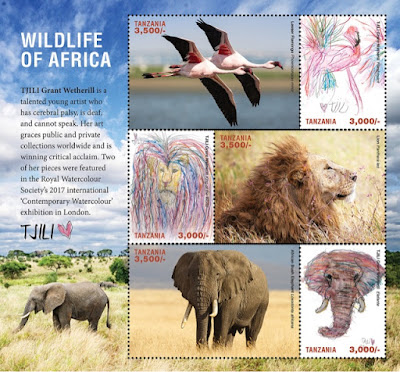 🇵🇬 After many, many months of delays PNG Post of Papua New Guinea finally put on sale its miniature sheet which is a joint issue with India Post. (See Blog 1150). Both countries put their respective items for sale on 31 December 2017 which was cutting it a bit fine, I think. The stamps in the sheets depict the national birds of India and PNG. Rating:- ***. 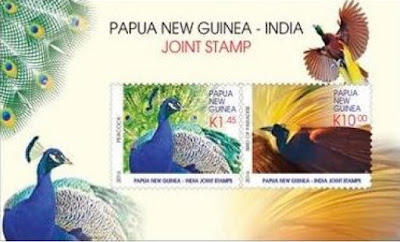 🇮🇳 In Blog 1150 I listed the numerous final issues of 2017 which have been released by India Post. The final stamp was that issued on 31 December which commemorated the 50th anniversary of the death of Justice Mehr Chand Mahajan and it is now depicted below:- 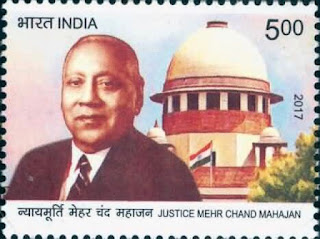