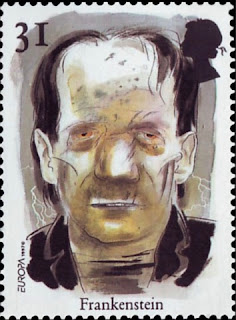 🇬🇧 This is just a short piece to muse that with the release of so many Fantasy-themed stamp issues in recent years (see Blogs 1153 and 1151), especially from Royal Mail, today marks the bicentenary of the first publication of the grandfather of all Fantasy novels - Mary Shelley's 'Frankenstein or The Modern Prometheus'. This anniversary goes - sadly - uncommemorated philatelically by Royal Mail although the novel, in its own way, is as significant in English literature as some works of Dickens, the Brontes, Jane Austin and, dare I say it, JK Rowling.
The novel did feature on a single stamp issued as part of a set of four by Royal Mail in 1997 and the stamp depicted a portrait of Dr. Frankenstein's monstrous creation looking as close as copyright laws would allow to the Universal Picture's version of the creature in its 1931film titled, simply, 'Frankenstein'. The monster was played by the then unknown English actor Boris Karloff. The film had as big an impact on the general public as 'Game Of Thrones' or 'Star Wars' has now; I remember being enthralled as a boy by the story told to me by my grandmother of how, when she was a young woman, she had taken herself to see the new film when it first opened. It was showing at what was then The Forum cinema in New Street in Birmingham (latterly it was known as the ABC but it was sadly demolished in the late 1980s or 90s). She recounted how the film terrified her - she had never seen anything so horrific before in her life - and her heightened fear was increased as she made her way home and a terrific thunderstorm broke out mimicking the thunder in the film. Nowadays the movie is pretty mild I suppose compared with the horrors of modern films but I suppose my grandmother experienced the same terror on seeing the movie as Georgians did when Mrs Shelley's book was first put on sale.
In the late 1950s, the British movie studio, Hammer, began making a series of movies based on the Frankenstein legend, the first being 'The Curse Of Frankenstein' and this film was depicted on one of the stamps issued by Royal Mail in 2008 which celebrated the 50th anniversary of 'Hammer horror' movies. In the film the part of Dr Frankenstein was played by the actor Peter Cushing and the Creature was played by Christopher Lee who soon appeared as Count Dracula in the Hammer film 'Dracula' with Cushing playing Dr Van Helsing (Dracula's nemesis).
Peter Cushing was commemorated on the Centenary of his birth by a stamp issued by Royal Mail in 2013. On the stamp he is depicted in another of his notable roles, that of Sherlock Holmes. The Hammer anniversary stamp also depicts Cushing, actually in his role as Frankenstein, but on one of the posters which promoted the film. 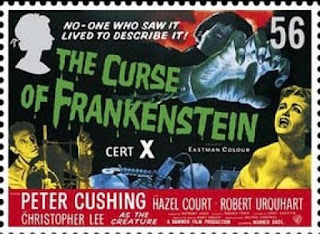 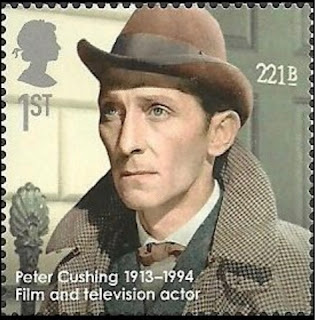 Finally we may note that another value of the Hammer anniversary set also pays homage to Frankenstein by depicting the poster which promoted the film 'Carry On Screaming'. This stamp was one of three in the set which commemorated the 50th anniversary of the 'Carry On' film series, the other three commemorating the Hammer movies. 'Carry On Screaming' was a pastiche of the various horror movies which had been made by Hammer including the Frankenstein films. The poster depicts the actors Barbara Windsor, Fenella Fielding, Harry H Corbett and Kenneth Williams who played the Frankenstein role. 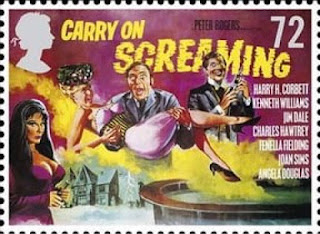 So far Mary Shelley herself has not been commemorated on a Royal Mail stamp but the various renditions of her magnificent creation mean that she is not wholly overlooked in the pages of the stamp catalogue.
Posted by White Knight at 08:40