1156. 🇬🇧 The Sun Fails To Shine On Game Of Thrones Stamps. 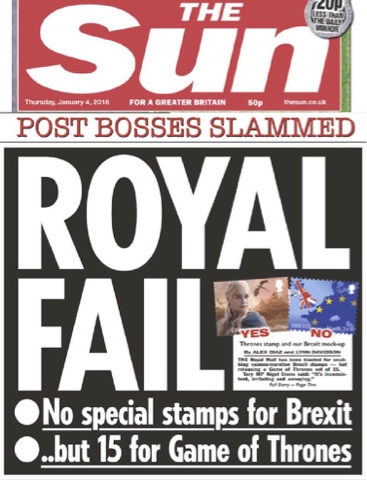 🇬🇧 The upcoming Game Of Thrones stamps are proving to be nothing if not controversial. While many stamp collectors see the issue as an opportunity for stamps to receive more widespread attention with the general public in Britain, others are threatening to give up their purchasing of new Royal Mail stamps because they see the issue as being trivial, overblown and unnecessary.
And now Britain's most popular tabloid newspaper, The Sun, has published a complaint about the issue as its front page headline. The newspaper is particularly inflamed about the issue because as previously discussed in Blog 1138, Royal Mail has stated that it will NOT issue any stamps to commemorate British exit from the European Union (Brexit).
The newspaper quotes one British Conservative Member of Parliament as saying that the decision to issue '15' stamps on the subject of Game Of Thrones and none for Brexit is "inconsistent, irritating and annoying". So we may conclude that not only has the Game Of Thrones issue come to the attention of the editor of Britain's biggest selling newspaper but also to the British Parliament. This, as I've previously predicted, means that this issue really is bringing stamp collecting to the attention of the general public and the publicity can not do any harm to sales of these particular stamps.
The Sun's front cover labels the situation as 'Royal Fail' and says 'Post Bosses Slammed' which I suppose they can bear if stamp sales are as big as they may hope for and income from the issue is particularly impressive. The cover, interestingly, also depicts a mock-up of a 'Brexit stamp' alongside one of the Game Of Thrones stamps. The faux stamp reminds one very much of the opening sequence of the veteran BBC television comedy Dad's Army, which features a map of Britain and Europe with arrows coloured by German symbols trying to cross the Channel and invade a Union Jack-coloured England. Doubtless The Sun will not disapprove of the planned upcoming Dad's Army stamp issue.
So, stamps are in the general news which surely must be a good thing.

🇬🇩🇬🇩🇬🇾 If the Game Of Thrones stamps are rebarbative to some people then there's always issues from agencies such as IGPC to remind us that things can be worse. I have so far overlooked a couple of products put out by that agency which have the names of Grenada, Grenada Carriacou And Petite Martinique and Guyana printed on them. Two of the issues are said to commemorate the 75th anniversary of the Second World War and the other marks the Centenary of the First World War. The designs have nothing to do with the roles played by people from Grenada and what was then British Guiana in the wars but, bizarrely, reproduce American recruiting posters which have no relevance at all to the former British colonies. Rating:- 0. 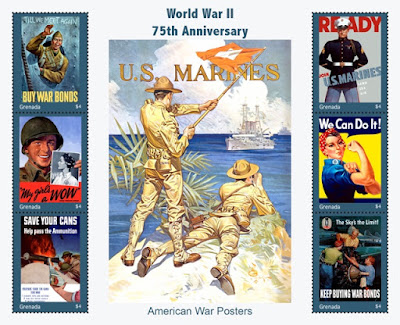 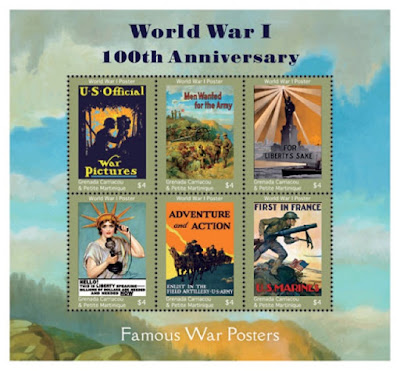 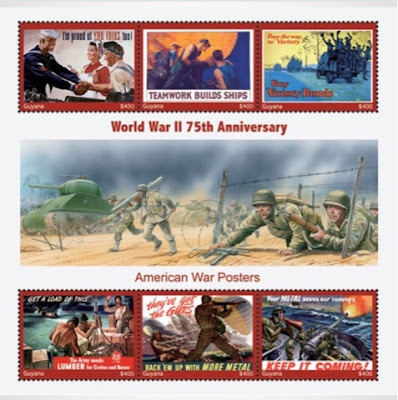