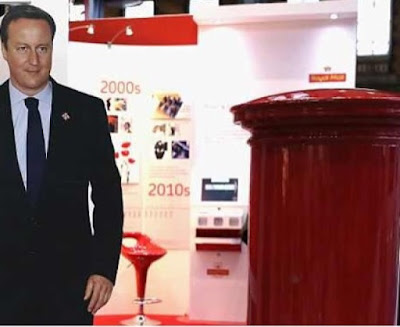 🇬🇧  If you want to know anything about British stamps of the present philatelic era then Norvic Philatelic Blog is indispensable. I look at it several times per day to see what is the latest news that Ian Billings is delivering to us and more often than not there's a new and fascinating piece of information to read about the latest activities of Royal Mail and sometimes, Jersey Post, Guernsey Post, Isle Of Man Post Office and even Royal Gibraltar Post Office. There is an immense amount of work put into this service by Ian which keeps us all informed and helps us to decide what or what not to spend our money on when it comes to buying the latest stamps from the British islands.
His latest post tells us about some new Royal Mail Post and Go labels sold at the Postal Museum which have not been reported by the Royal Mail Intelligent AR Post and Go information site. On 3 April 2017 the Postal Museum kiosk began to dispense single design strips of the Post Office Underground Railway stamps with the Postal Museum logo applied to them. This is a relevant item for the soon-to-be-opened postal museum with its links to the Underground railway and is quite collectable though I'd rather just have a pair of the lowest values rather than a multivalue strip as it makes the same point but is considerably cheaper. Strips of the items are being sold on E Bay. A pair is depicted below.
Ian Billings quite justifiably points out how badly publicised these and other items are to collectors, whom I suppose are the only target audience, and I looked at the IAR Post and Go site (which I haven't been able to locate for a while) which led me to Vince Patel's checklist of Post and Go issues which has a section on Party Conference issues.
We are all familiar with the issues from the Conservative, Labour and Scottish Nationalist party conferences of 2016 (see Blogs 836 and 841) but Vince Patel includes in his checklist similar issues for the 2015 party conferences in Brighton (Labour), Manchester (Conservative) and Aberdeen (SNP). The checklist identifies that Collectors strips from all 3 conferences are known to exist and that the first two exist with the site-locating inscriptions on Machin Head and Union Flag stamps whilst an Aberdeen inscription was used on Machin Head and Heraldic Lion labels. The Manchester and Brighton strips are 6 x 1st while that from Aberdeen is multivalue.
In Blog 836 I featured a photograph taken at the Royal Mail stand at the 2015 Conservative Party conference which depicted a life-size model of the then prime minister, David Cameron, positioned outside the stand and with a Post and Go kiosk clearly visible in the background. I queried whether specially inscribed Post and Go labels had been available at the 2015 Conference but noted that I had never seen any publicity on the subject or anyone offering such items for sale. But it appears that such an issue does indeed exist. No illustrations of the 2015 party conference labels have been seen and there are no illustrations in Vince Patel's checklist. Perhaps if someone owns such items they could let Norvic Stamps Blog have illustrations of them as I'm sure there are many people who would love to see them. I can't find any such illustrations published on the internet but maybe I've just overlooked them. A set of three Party Conference labels of 2015 must surely be a Holy Grail for Post and Go collectors. 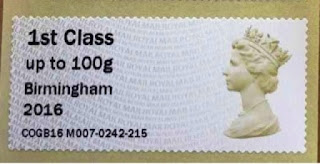 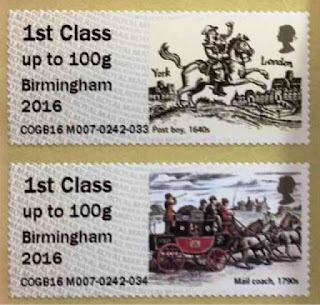 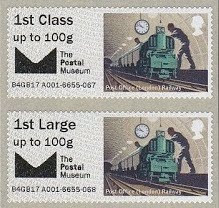 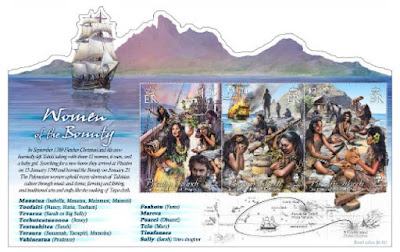 🇵🇳 Bounty Post, the postal service of Pitcairn Islands, issued a miniature sheet on 30 March 2017 as a joint issue with French Polynesia to commemorate the Melbourne 2017 International Philatelic Expo. The issue takes the form of a miniature sheet which celebrates the women who left Tahiti with the crew of The Bounty to journey on until they arrived at Pitcairn Island.
It seems that the sheet comes in 2 forms - without and with an inscription noting the Melbourne exhibition and Bounty Post is also selling a single stamp which depicts the Tahitian women. Finally there is a joint first day cover which contains the Pitcairn and French Polynesia issues. Rating:- *****.

🇧🇼 In addition to the 4 stamps mentioned in Blog 946, Botswana Post also issued a miniature sheet containing the 4 stamps which made up the set depicting leopards of Botswana on 28 February 2017. This is clearly a very attractive item. Rating:- *****. 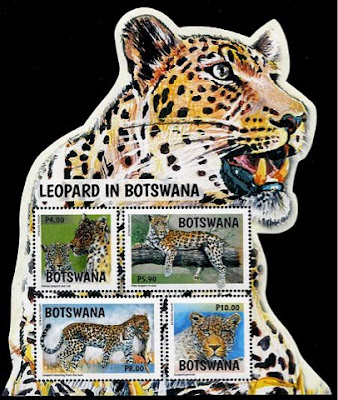 🇮🇳 India Post issued a pair of stamps on 14 April 2017 to commemorate the 126th birth of Dr. BR Ambedkar. The stamps depict Ambedkar who reverted to Buddhism on 14 October 1956 and the Buddhist sacred monument of Deekshabhoomi in Nagpur where Ambedkar's reversion occurred. Ambedkar is viewed as the architect of the Indian constitution. Rating:-  ***